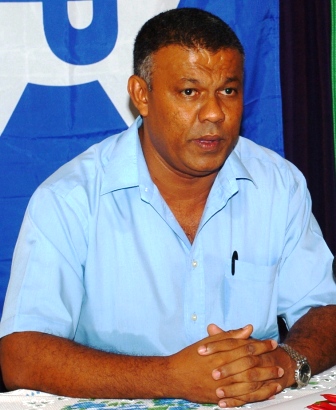 Ralph Volcère has resigned as interim leader of the Seselwa United Party (SUP) and editor of the Le Nouvo Seychelles Weekly.
According to a press release, Mr Volcère tendered his resignation to the party steering committee on Monday April 21, 2014.

The steering committee met and considered his resignation. It resolved to accept the resignation and Robert Ernesta has been selected to take over the duties and responsibilities of Mr Volcère who attributed his decision to resign to personal reasons.

The release adds that Mr Volcère has devoted over three decades of his life to politics, mentored by the late Gerard Hoareau in his early years. Returning from exile, Mr Volcère became active on the local political scene before ultimately taking over the leadership of the Democratic Party whose name he later changed to the New Democratic Party.

When he took over the party’s leadership in March 2009, Mr Volcère said the DP has been dormant but he will transform it into a serious, determined and vigilant party that will be active throughout the year, “rather than sleeping only to wake up just prior to an election”.

After serious reflections and consultations, Mr Volcère, together with others, took the bold step to launch the SUP with the stated objective of uniting the people of Seychelles.
For the past twelve years, Mr Volcère had been working with the Le Nouvo Seychelles Weekly the mouthpiece of the party.  He spent eight years as the editor.

“The editorial board of the Weekly and the steering committee of the SUP take the opportunity to thank Mr Volcère for his invaluable contribution to bringing Seychelles to what it is today and wish him all the best in his future endeavors,” adds the press release.