UNODC’s support to Seychelles celebrated |07 May 2014

Seychelles has for the past four years been receiving the support of the United Nations Office on Drugs and Crime (UNODC) and this was celebrated during a gathering on Monday night at the Berjaya Beau Vallon Bay resort and casino.

The UNODC counter-piracy programme (CPP) has been in practice since 2009. Its initial objective was to help Kenya deal with the increase in the number of attacks by Somali pirates but it has since expanded to working in six countries in the Somali Basin region – Kenya, Seychelles, Mauritius, Tanzania, Maldives and Somalia.

The work of the UNODC to counter piracy involves working in four key areas: law enforcement, prosecution, courts and prisons. It aims to leave behind a strengthened criminal justice system in the region.

During Monday’s ceremony, Shanaka Jayasekara, UNODC programme officer presented a slideshow to demonstrate its many achievements made in Seychelles over the past four years. 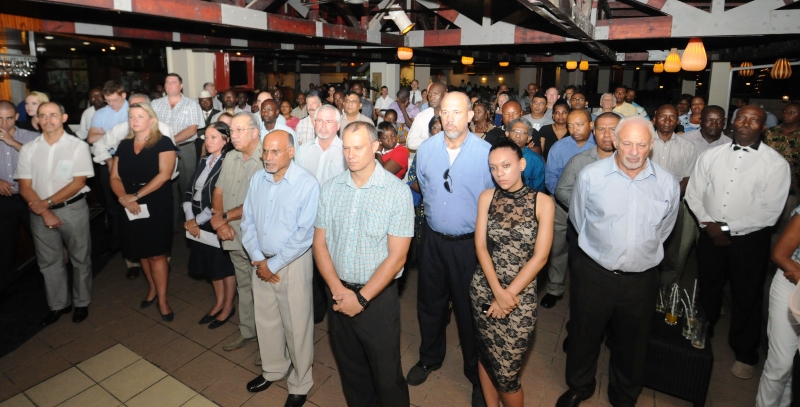 This include the support to amend Seychelles piracy laws, support to the police and the coast guard in the form of mentoring, training in evidence handling and intelligence analysis, as well as the provision of the communication and surveillance equipment and structural improvements at the Montagne Posée prison.

In addition, support was also extended to prosecutors for specialist training related to piracy, and they were also able to take part in regional exchanges. Another great achievement which has come from the trainings offered is a University of Seychelles certificate in Maritime Crime and Law Enforcement course which is now available to students.

Mr Jayasekara added that they have received funding from many countries such as Australia, the Netherlands, Denmark, European Union, United Kingdom, and United States of America. The total spent in Seychelles over the past four years on projects delivered by the UNODC has amounted to US $4 million.

According to French ambassador Iancu, who spoke on behalf of the European Union, the EU is not only the biggest donor in Somalia with a contribution of 1.2 billion euros for development and capacity building, but also carries out three common security and defence policy missions – Atalanta operation, EUCAP Nestor, and the EU Training mission Somalia.

Home Affairs and Transport Minister Morgan took the opportunity to speak of the improvements which took place late in summer 2013, when the UNODC together with donor nations such as the United Kingdom and the Netherlands, as well as the trust fund, began construction on a new Supreme Court Annex at the Ile du port. The new building will have modern courtrooms and advanced technology to help counter piracy.

The UNODC also expressed its appreciation of Seychelles who presented its condolences to the families, as well as to the United Nations and the UNODC families following the killing of two UNODC international staff members – Simon Davies and Clement Gorrissen – in the Puntland State of Somalia.

Mr Jayasekara said that although their main aim up until now has been to counter piracy in the region, they wish to broaden their scope to address maritime crime as a whole while working closely with Reflecs3 (Regional Fusion and Law Enforcement Centre for Safety and Security at Sea) on maritime security initiatives.
He concluded that the UNODC will keep supporting Seychelles.

The UNODC help worth in excess of US $4 million has significantly increased Seychelles’ capacity to counter piracy and helped the country become the most active piracy prosecution centre in the region.  A total of 124 people have been prosecuted – 122 convictions and two acquittals – while 23 remain on trial.

In addition to supporting the prosecution of suspected pirates in Seychelles, the UNODC Prisoner Transfer Programme has enabled 96 Somalis convicted of piracy to be transferred to prisons in Somalia, significantly easing the burden on Seychelles’ prison system.

Some examples of UNODC help are:
• Support to piracy trials including the provision of interpreters, the travel of foreign witnesses and funding for legal aid.  UNODC is constructing a new Supreme Court Annex and will provide case management equipment, video link technology and legal research resources for the Supreme Court.

• Montagne Posée Prison has been significantly improved through the construction of a 60-bed maximum security wing, exercise yard, gym, medical centre and other works.  UNODC developed a prisoner education programme and is currently supporting the construction of a Vulnerable Prisoner Unit and Juvenile Rehabilitation Centre on Praslin.

• UNODC has enabled Somali prisoners convicted in Seychelles to be transferred to Somalia through its construction of prisons in Somalia and funding for flights.  UNODC has also funded flights to repatriate Somalis who finish serving their sentences or are acquitted. UNODC has eased the transfer of 96 prisoners to Puntland and Somaliland to serve the rest of their sentence and repatriated seven post-sentence/acquitted Somali prisoners.

• Full-time mentors have been provided to the police and prisons, a prosecutor from the UK was funded to enhance local capacity. UNODC now has a fulltime resident programme officer based in Seychelles to coordinate UNODC activities.

• Equipment has been provided including police vehicles, radios, forensic and IT equipment.  UNODC is currently constructing three towers to install microwave links which will connect Mahé, Praslin and La Digue. The microwave links will be connected to six repeaters stations which will provide total radio coverage for the police communication network over the three islands.

UNODC is strongly supportive of Reflecs3 and its efforts to combat transnational organised crime, ease information sharing and build local capacity. UNODC has provided Reflecs3 with furniture equipment and a vehicle. The UNODC programme office is located within the Reflecs3 offices.  UNODC is applying for significant funding from the Trust Fund of the CGPCS for technical resources to enhance the maritime domain awareness capability at Reflecs3.