Practicing judges, lawyers and state counsels joined former President James Mancham, religious leaders and members of the Constitutional Appointment Authority in a ceremony presided by Acting Chief Justice Durai Karunakaran and which took the form of a ceremonial court sitting.

They moved that his judicial career has been marked by “the Sauzier principle”, a combination of his judicial temperament, firmness and sense of logic and professionalism. 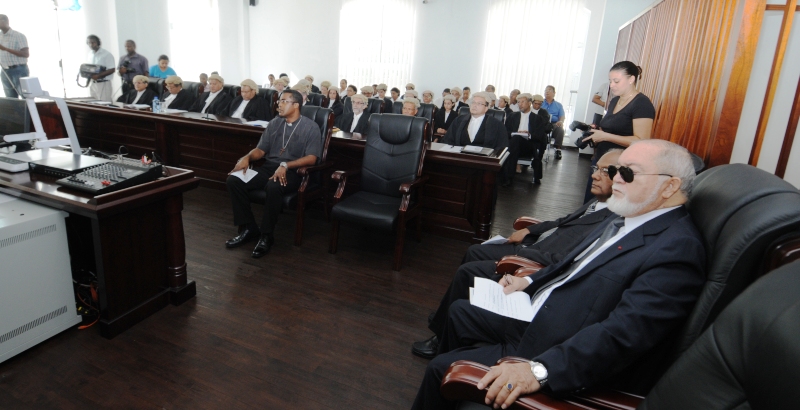 Mr Boullé presented a symbolic Court Judgment declaring Mr Sauzier the greatest Judge that the Seychelles has ever had. Of the Judge with to date the least percentage of judgments reversed by the Court of Appeal, and of which the same judgments have become useful references to the courts, but who when called as a witness waited on the bench outside the court room instead of in his CJ office, Mr. Boullé had this to say:

“One cannot be a great judge without being a great man. We have not only lost a judge, we have lost a teacher. Mr Sauzier helped lawyers and prosecutors who appeared before him. He was a very firm judge but with an equal measure of kindness. He thought that mediocrity should not be tolerated in the court of justice but that only the very best standard should be upheld with the essential attributes of justice. If today lawyers understand French law, it is due to the enlightened judgments of Judge Sauzier.”

In a form of symbolic justice for a man whom the Acting Chief Justice has said “loved the truth, loved justice and ensured that the final product was concise and to the point”, Judge Karunakaran ruled that the judgment was not appealable.

“A man becomes great in the degree to which he attends to the welfare of his countrymen,” Justice Karunakaran said.

Apart from his judiciary duties where as an innovator and judge ahead of his time he has also been instrumental in drafting many of Seychelles’ modern laws, Justice Sauzier also served in the British Army during the Second World War, time when he was obliged to temporarily abandon his law studies.

When he retired as a judge in 1987, he became a legal consultant and arbitrator. At the return of multi-party politics in Seychelles, he was appointed the first Registrar of Political Parties in 1993, before becoming the country’s Electoral Commissioner.