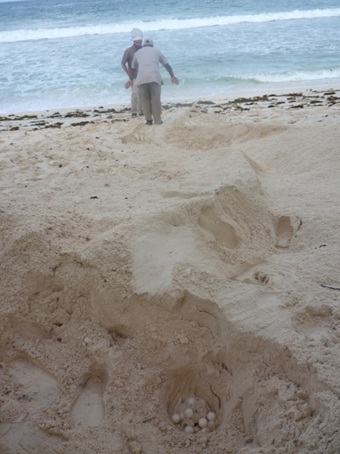 While the Seychelles are currently in the bird egg season, it’s another species that has laid eggs at Grande Anse Kerlan in Praslin these past few days.

On July 4, a female green turtle (CheloniaMydas) enjoyed the privacy and luxury of the Anse Kerlan beach to lay her eggs. For the second consecutive year, the team of the Constance Lemuria Seychelles was privy to this extraordinary event. Last year, on several occasions, they helped rescue and protect the eggs of various hawksbill turtles.

Robert Matombe, who is the turtle manager at the Constance Lemuria Seychelles, was making his daily rounds on July 4 on the beach when his keen eyes noticed tracks in the sand. He immediately called Adrian Allison, the landscape manager at the resort, and together they went looking for what they knew to be turtle eggs. They soon discovered 135 eggs and immediately established a perimeter around the area to ensure their safety.

They had removed the eggs from the sand, put them into a big box covered with sand and kept them in a special room. When the eggs will hatch, they will very carefully release the new born baby turtles on the beach, at sunset time when the wind is low and fewer predators are around.

“We know that the turtles usually lay eggs during this period so it is very important for us to do the daily patrols on the beach. Since one female can lay eggs up to five times every two weeks in the same place, we need to restrict the access so that the animal may be safe if she comes back,” explains Isabelle Le Gac, the press and social media coordinator at Constance Lemuria Seychelles.
Messrs Matombe and Allison will be camping on the beach to have a chance to see the female laying eggs, without any light or noise to disturb her. They do not want to be seen or heard. Just for the beauty of the scene!

According to research, normally the green turtle (CheloniaMydas) lays between 100 and 200 eggs; this group of eggs is called a clutch. She covers them with sand to protect them from the sun, heat, and predators.

Green sea turtles live in tropical waters all over the world. The only time they emerge from the water is when they are nesting. The only time males are not at sea is when they were first born. When it is time to mate they migrate from several hundred to over a thousand miles across the ocean to where they hatched. Female green turtles use the same beaches to nest as their mothers and grandmothers. They are called green turtles because of the colour of the flesh.

Cheloniamydas are one of the largest turtles ranging from 71 to 153 centimetres. They can weigh up to 205 kilo¬grammes and are mostly herbivoous. They spend most of their time feeding on algae in the sea and the grass that grow in shallow waters.

As juveniles, they eat plants and other organisms such as jellyfish, crabs, sponges, snails, and worms. As adults, they are strictly herbivorous.