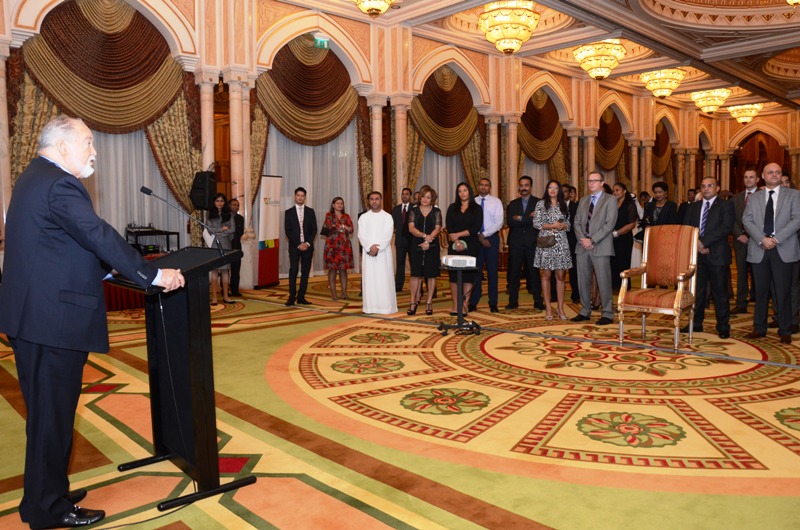 Seychelles’ founding President James Mancham has officially launched his new book, SEYCHELLES - The saga of a small nation navigating the cross-currents of a big world, in the UAE.

The event took place on Sunday evening at the Inter-Continental Hotel in Abu Dhabi during a special reception hosted by Seychelles’ ambassador to the UAE, Dick Esparon, with the sponsoring support of Air Seychelles, Etihad Airways, Seychelles Tourism Board and the Al Reyami Construction Group of UAE.

Mr Mancham, who arrived in Abu Dhabi from Paris on Saturday October 11 was met and welcomed on arrival at the Abu Dhabi International Airport by Saif Kharbadi from the Protocol Office of His Highness, the Crown Prince of Abu Dhabi, Sheikh Mohammed bin Zayed bin Sultan Al Nahyan, Deputy Supreme Commander of the UAE Armed Forces.

At this well attended reception, Emanuele de Stefani, the representative of the Al Reyami Construction Group in Seychelles, delivered introductory remarks concerning Mr Mancham’s background and achievements both in Seychelles and internationally.

He was followed by Ambassador Esparon who recalled Mr Mancham's return to Seychelles in the early 90s after more than 15 years in forced exile and took the Seychellois people by surprise when he called for national reconciliation instead of revenge and recrimination.

Mr Mancham said he was particularly thankful to the ambassador to have organised the occasion as his book has highlighted the important collaboration between Air Seychelles and Etihad Airways which he has described as “a marriage made in heaven”.

This, of course, would not have happened if the greater picture did not reflect the special relationship existing between Seychelles and the UAE today, which he described as a “love affair” more than anything else.

The speeches were followed by the signing of copies of the book which were presented to all guests made up of high government officials, senior directors of Etihad and contingents of travel agents and friends of Seychelles in the UAE.

Mr Mancham said he would be returning to Seychelles tomorrow from Abu Dhabi instead of going to Cape Town, South Africa, where he had accepted the invitation of the Mayor of Cape Town and the Mandela Rhodes Foundation to take part in the gathering of the Nobel Peace Prize Laureate event which the Mayor had organised in memory of the late Nelson Mandela.

"Sadly, the gathering was promptly cancelled following the refusal of Pretoria to issue a visa to the Dalai Lama who had been specially invited to patronise the event,” Mr Mancham said.