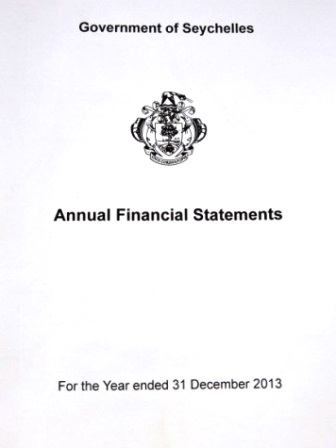 statements (AFS) in respect of each financial year and submit them to the National Assembly. The Public Finance Management Act (PFMA), 2012 enlarges on these requirements so as to provide a framework for the production of the statements. The provisions in the new PFMA are modern and significant, particularly those in Section 28 -33. For example, for the first time the Act requires the government AFS to be prepared in accordance with the internationally accepted public sector accounting standards, i.e. IPSAS.

Secondly, the Act makes provisions for the auditing of the said statements to be completed within a timeframe of six months after the end of each financial year that is to say by the end of June. On the whole, the Act provides a more accountable and transparent framework for the public finance management across government.

Under these requirements, the government has prepared and published the AFS for 2013 with the opinion of the Auditor General thereon. In view that the AFS have been prepared under a new financial reporting framework (IPSAS), it is important to analyse these statements to gain a better understanding of the contents and the improvements they reflect. In general, the AFS for 2013 provide much more information than in previous years and thus are more useful to the readers, users and the public at large.

Revenue and Expenditure – comparison of budget and actual (page 6)
The other new statement is the ‘comparison of budget and actual of revenue and expenditure’ showing, in summary form, the revenue and expenditure budgets and the actual realised for the year 2013. In this statement, the revenue is broken down into tax and non-tax sources and the expenditure as current outlays, interest payments, transfers to other governmental entities, capital expenditure, net lending and contingency. The primary balance (surplus) shown therein is the operational results of the government for 2013, before financing activities, which is akin to the gross profit in a private enterprise. The net surplus for the year is the balance credited to the Consolidated Fund.

Notes to Accounts (pages 7-21)
The notes are an integral part of and should be read in conjunction with the statements to gain a better understanding of the accounts. The notes in 2013 have been modified and expanded on to explain the adopted financial reporting framework, accounting policies and the account balances contained in the statements. One of the important notes in 2013 is the detailed ‘explanation of material differences between the budget and actual amounts’ on Page 13, prepared for the first time under the IPSAS. Unlike in previous years, in a comparison of budget and actual figures, the Ministry of Finance has explained the reasons for material differences in revenue collection, expenditure heads, contingency, etc. The information provided goes a long way to improve public transparency with regard to the fiscal policies connected to and management of the budget for the year 2013.

Another important note (6) prepared for the first time in 2013 is the one on page 18, showing the details of sources and amounts of loans and grants raised during the year by the government.

On the liabilities side, the ‘short term borrowings’ is the most significant balance comprising Treasury bills and the funds deposited with Treasury by certain governmental entities. This is followed by the Consolidated Fund balance which showed an improvement in 2013 due to a reduction in the accumulated deficit resulting from a credit transfer from the Development Fund that was closed during the year under the new chart of accounts.  In previous years, the Development Fund was used to account for the funds relating to capital expenditure of the government, which is now accounted for through the Consolidated Fund.

Government Investments (page 208)
This statement is not required either by law or the accounting basis adopted by the government, but has been prepared over the years to provide additional information to the public on the outstanding balance of various cash investments in parastatal and other companies. It is to be noted that these companies are normally required to prepare annual financial statements and publish them following an independent audit of the same.

Public debt statement (page 209-215)
The public debt statement is an important document required by Article 154 of the Constitution. The statement provides complete information on the source of borrowing, legal authority for such borrowing, amount of principal, interest payment and the outstanding loan balance at the end of each year. Under the cash basis accounting, normally the long term loans are not included in the statement of assets and liabilities.

Outstanding guarantees (page 216)
The preparation of this statement is required by Article 154 of the Constitution. The outstanding balance of legal obligations of the government in the event the borrowers fail to repay the loans is akin to contingent liabilities, as known to the accountants in the private sector. The government has provided these guarantees to certain parastatal organisations to support their financing activities.
Apart from the above mentioned key statements, the AFS provides relevant, reliable and comparative financial information on the following.

Current outlays
The summary of recurrent outlays on page 33 shows the actual total expenditure of each Ministry/Department/Office, some government service bodies and centralised payments relating to salaries and wages and goods and services against the respective original budget as approved by the National Assembly.

The recurrent outlays summary is followed by a detailed breakdown of the budget and actual expenditure of each Ministry/Department/Office/Government service body, on pages 35 to 116. In respect of each entity, the actual expenditure is compared to the budget under seven major budget lines, namely Wages and Salaries in cash, in kind, Office Expenses, Transportation and Travel Costs, Materials and Supplies, and Other Uses of Goods and Services.

In addition to the recurrent expenditure incurred by various entities, the government also incurs expenditure under Centralised Votes on behalf of ministries/departments/statutory bodies/projects and programmes, as shown on pages 117 to 122. Is it to be noted that certain expenditure votes are centralised in order to ensure better control, accountability and economy.

Grant expenditure
The amounts spent by the government out of grant receipts from various sources may be seen on pages 169 to 173 with the name of each project/programme on which the spending has incurred. To a large extent, the grants have come from various multinational and international organisations, such as, GEF, Commonwealth and UNEP for the implementation of specific projects and programmes.

Trading and operating accounts
The AFS comprise a number of trading and operating accounts (pages 177 to 184) being maintained by various entities for the specific purposes and in the manner as approved by the Ministry of Finance. Unlike the revenue and recurrent expenditure accounts which are closed at the end of each financial year, these accounts are carried forward to the next financial year and included in the statement of Assets and Liabilities.