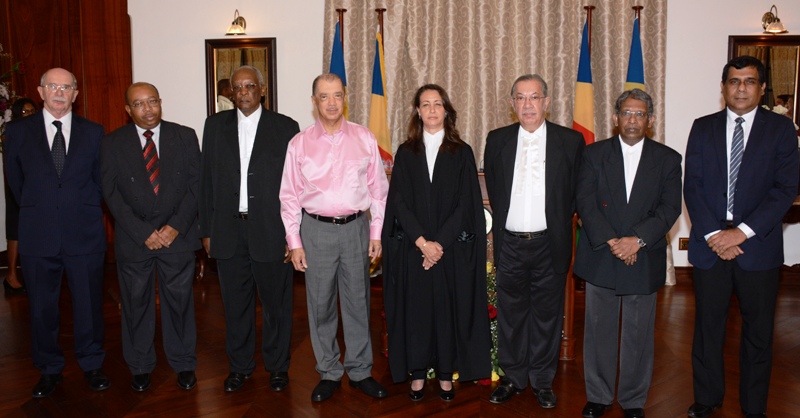 Mathilda Twomey, née Butler Payette, was sworn into office as the new and first Seychellois female Chief Justice of the Supreme Court of Seychelles in a ceremony at State House yesterday morning.

She took the Oaths of Allegiance and the Judicial Oath before President James Michel and in the presence of the Speaker of the National Assembly, Dr Patrick Herminie, the president of the Court of Appeal, Justice Francis MacGregor, judges and justices of appeal, the chairperson and members of the Constitutional Appointments Authority, the deputy Attorney General, senior lawyers, members of her family, as well as senior officials in the Office of the President.

Justice Twomey's appointment as Chief Justice follows the unanimous recommendation made to the President of the Republic by the Constitutional Appointments Authority.

She becomes the first Seychellois female to hold the post of Chief Justice in the country.

In a statement she made at the end of the swearing-in ceremony, Chief Justice Twomey expressed her gratitude for the trust and confidence that the Constitutional Appointments Authority and President Michel have placed in her. She said she would serve Seychelles to the very best of her ability.

“I am honoured to have been appointed Chief Justice by President James Michel on the recommendation of the Constitutional Appointments Authority… It is an office which carries onerous duties and great responsibility. I acknowledge the learned men who have preceded me in this office. The expectations of the bench, bar and the Seychellois people in general are high. I welcome the huge challenge and will do my best to live up to it,” said Chief Justice Twomey.

She added: “I will now sit in the Court of Appeal and the Supreme Court, and will serve both with equal energy and fervour. It is a unique position to be in and one which I intend to harness to spearhead the constitutional and structural reforms to see our judicial system brought into the 21st century.”

She however noted that cases that she hears in the Supreme Court she will not be able to deal with in the Court of Appeal.

Justice Twomey stressed that the judiciary should refrain from engaging in political arguments and that its officers should deliver according to their official oaths of office.

“It must also rise above modern multimedia influences that reduce our justice system to a case-by-case microcosm that assigns partisan political motives to every court decision and defines the judiciary by the relationships its members have, especially in the tiny community of Seychelles where everyone is interrelated by bonds of kinship or friendship. Its officers must perform their duties serene in the respect of their constitutional oaths of office, and in its mandate of an independent and impartial judiciary. Its greater responsibility is to strive in the maintenance of the rule of law,” she said.

Mrs Twomey has had an illustrious career in the legal profession, serving as a barrister first in the Ocean Gate Law Centre, as pupil to Francis MacGregor, now president of the Court of Appeal. She also served in the Attorney General’s Chambers, and later as an attorney-at-law in private chambers.  She was a member of the Constitutional Commission which drafted the Constitution of the Third Republic.  She moved to Ireland in 1995, where she has been resident until now.