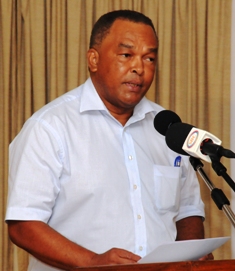 Representatives from several countries of the region met in Seychelles in a workshop on how to assess coastal hazards.

The five-day training workshop held last week was organised by the Division of Risk and Disaster Management (DRDM) in partnership with the Intergovernmental Oceanographic Commission of the United Nations Educational, Scientific and Cultural Organisation (IOC-UNESCO).

The workshop was also supported by the Malaysian Funds-in-Trust project.

Since its inception in August 2005, the working group on Risk Assessment and Reduction of ICG/IOTWMS has assisted member states in strengthening the capabilities in the field of tsunami risk, mitigation and management.

Vulnerability assessment and risk modelling is an important component for an effective end-to-end tsunami early warning system and therefore contributes significantly to disaster risk reduction. The knowledge about elements at risk, their susceptibility, coping and adaptation mechanisms are a precondition for the setup of people centred warning structures, local specific evacuation planning and recovery policy planning.

PS Agricole said that the aim of such workshop is to respond to the need of member states of the Western Indian Ocean and its small island developing States to be better prepared in case of a disaster.

“Representing your country has all been identified as important regional partners whom we believed can positively contribute in the development of coastal hazard assessments within an overall risk assessment, management and mitigation framework. As such, it is hoped that through continuous dialogue and our collaborative effort, this workshop will facilitate productive and rewarding outcomes as we adopt a comprehensive approach to tsunamis and other coastal hazards,” he said.

He added that such a workshop would have had prepared us better for the tsunami that happened in 2004.

“We cannot underscore the importance of adequate and effective early warning systems for tsunamis. Last week, precisely on Wednesday March 2, 2016 a major 7.9 magnitude earthquake struck one of the world’s most disaster prone countries in south west Indonesia at approximately 12:49 UTC. A tsunami warning was issued by the Indian Ocean Tsunami Warning Centre and Seychelles was on the alert and our tsunami protocol was tested,” he noted.

He pointed out that people of the Western Indian Ocean have to ensure that they are always ready for any eventuality.

“We have to continually seek to stimulate in our public a culture geared towards disaster risk reduction and management which includes the key element of preparedness,” he pointed out.

Mr Elliot stated that this workshop will enable delegates to have a better understanding of how to better prepare for an eventuality like a tsunami.

He said every country has learned more about how to better prepare themselves for such an incident like the tsunami that occurred in 2004.

“Risk assessment and reduction is one of the 3 pillars of the IOTWMS medium- term strategic plan, along with detection, warning and dissemination, and awareness and response.  The goal of this workshop is to contribute to the establishment of effective early warning systems for tsunamis and other sea related hazards by raising the levels of awareness and understanding among participants of coastal hazards, in particular tsunami risk and mitigation,” he said.

He added that it is important to learn from the mistakes of the past.

“It is now over 10 years since the Indian Ocean tsunami and to commemorate the disaster, IOC Unesco organised an international conference in Jakarta in November 2014 to recognise the achievements of the last 10 years and to highlight work that still needs to be done.  Among the remaining gaps, it was recognised that hazard and risk assessment needs to be improved, including vulnerability and exposure,” he pointed out.

He also thanked the government of Seychelles for its generous support for this workshop and in particular the director and staff of the DRDM for their help with the local logistics for the workshop.

The training was attended by delegates from the Comoros, Reunion, Kenya, Madagascar, Maldives, Mauritius, Mozambique, South Africa and Tanzania.

It is expected that the delegates will use their enhanced knowledge and skills in risk assessment and management to provide training to fellow colleagues.