Thirty employees from 28 different organisations in the private sector have been rewarded in the first national private sector Employee of the Year Award ceremony held at the Eden Bleu Hotel on Thursday evening.

The award launched in February last year aims to recognise the skills and performances of exceptional employees in the private sector.

Awardees were honoured for their ability to encourage and motivate other employees, for their behaviour as role models for their peers and colleagues as well as being good ambassadors for their respective organisations.

Employees from 28 organisations and falling in eight categories were rewarded in this first recognition ceremony. The different categories range from construction, financial and insurance services, manufacturing, transportation and storage to name but a few.

The finalists went through a rigorous selection process conducted by two different independent committees and among the more than 70 nominees, 32 reached the final.

Ministers, representatives of different private companies and sponsors among other guests attended the ceremony.

Each category was made up of two sub-categories – supervisory and non-supervisory.

The categories and first prize winners are as follows:

- Accommodation and Food Service: Robert Matombe, a landscape supervisor from Lemuria Resort on Praslin; and Nickerro Marie an IT technician at Le Domaine de L’Orangeraie on La Digue.

- Construction Industry: Linda Meme, a supervisor at Vijay Construction for 31 years and the only nominee and finalist in the supervisory category; and Julio Elizabeth, a quantity surveyor at Shreeji’s Construction.

- Information and Telecommunication: Erna Hoareau, customer service manager at Airtel. There were no nominees in the non-supervisory category.

- Financial and Insurance Services: Dorothee Morin, human resource manager with 37 years of service at the Mauritius Commercial Bank (MCB); and Paula Gedeon, personal assistant to the managing director of the Bank of Baroda and the only nominee in the non-supervisory.

- Transportation and Storage Industry: Dereck Samson a supervisor/driver at Hunt Deltel, the only nominee; and Lucynda Morel, a secretary and administrative officer at Aquarius Shipping.

- Trade, Commerce and Business: Daniel Victor, an assistant supervisor at Pilgrim Security; and France Meriton a security guard with Isles Security based at the Seychelles Hospital.

Following the presentation, Erna Hoareau, communications manager at Airtel delivered a vote of thanks.

Punctuated by modern choreographic performances by the School of Dance as well as songs by well-known local artists Isis and Isham Rath, Jose Charles and Travis who all placed emphasis on the importance of hard work, the award evening was a glamorous affair. 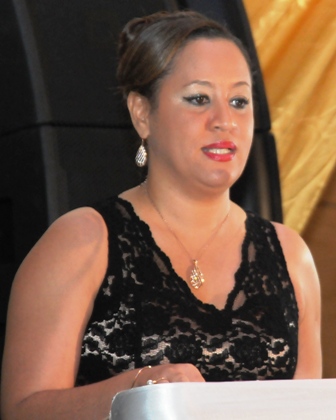 Addressing the awardees and other distinguished guests present for the event, Labour and Human Resources Development Minister Idith Alexander said when the award was conceived and launched during Productivity Awareness Week last year, it was the vision of the ministry and the government to ensure workers in the private sector who go beyond the call of duty are recognised and rewarded.

“The idea was to ensure good performances are continuously valued and promoted at national level,” Minister Alexander pointed out, stressing on the fact that the private sector is the engine of the economy and the employees the backbone on which the engine is mounted.

She availed of the occasion to call on everyone present to remember the late Olivier Charles, someone who fought for workers’ rights in Seychelles, mobilised the working class and was the leader of the Seychelles Federation of Workers’ Union from 1978 to 1994.

“Although he is no longer with us we honour his achievements,” Minister Alexander said.

Speaking after receiving their prizes, all the winners expressed joy, deep appreciation and more importantly gratitude to the organisers but most of all to their respective organisations which have seen their dedication and recognised their commitment, loyalty and appreciated them enough to nominate them for the awards.

Linda Meme, the only nominee in her category, said she is really happy though she was not expecting a prize.

“It was a real surprise for me but I am happy and I am looking forward to continue to work for the company. I have learned so much and I am ready to share with my subordinates what I will learn in the forthcoming training,” she said.

As for Nickerro Marie who has been as an IT technician at Le Domaine de L’Orangeraie on La Digue since 2011, he said he is grateful to his management.

“They provide lots of opportunities for staff development and the work environment is very conducive to development and very encouraging to work,” he said. He also expressed heartfelt gratitude to his parents who have inculcated in him good work ethics and values. He has also thanked Jude Jeremie for mentoring him.

Madeleine Nicholas, the only female employee who takes over the running of the farm she works for in the absence of the owners, said she has overcome a lot of challenges but loves her work.

“I have always worked with devotion and remains committed and focused because at the end of the day I have to be productive in order to earn a salary and in spite of all the criticisms that are leveled against me I know my priorities have always been to do my work well and I am really happy that this has been recognised,” she said, adding that she really enjoys her work and working with the over two dozen employees.