The 4th Global Biennial Conference on Small States (GBCSS) is currently taking place at the Avani Resort & Spa at Barbarons, under the theme 'Achieving a resilient future for small states'.

The two-day meeting which has brought together senior officials from Commonwealth and non-Commonwealth small states as well as key regional and international development partners, aims at taking stock of the challenges faced by small states, considering their strategic vision for the future and reviewing the tools required to achieve their goals.

While expressing regret for this time not being able to be back in the beautiful country where she honeymooned in 1995 as she is attending another important conference on anti-corruption in London, Commonwealth Secretary General Patricia Scotland has in a recorded video message thanked Seychelles for hosting the conference.

She has duly remarked that by accepting to organise the gathering, Seychelles has brought it to Africa for the first time.

In her absence, Deputy Secretary General Deodat Mahara has commented that Seychelles will be the “centre of Commonwealth for those few days”.

Commending the government for choosing the Blue economy as a development option, he also congratulated Seychelles and Mauritius for being the first countries in the world to jointly manage an ocean area – the Mascareigne Plateau.

His thoughts that vulnerability should be criteria for access to funding were shared by Vice-President Danny Faure when the latter officially launched the conference.

Speaking in the presence of other government ministers and members of the diplomatic corps, Mr Faure expressed Seychelles’ delight to welcome the Commonwealth family to the Small States biennial meeting. 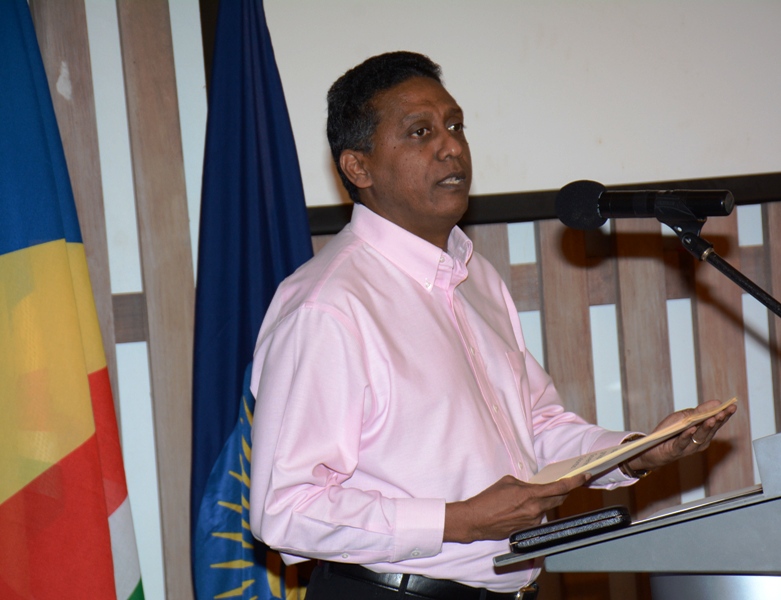 The organisation, he recalled, has consistently acted as champion of small states within the international arena and has created space where their ideas can be advanced.

“Our small states forum thus continues to be of utmost relevance and offers a platform through which we can better advocate for our specificities, which for too long have not been recognised within the world’s developmental structure,” he said.

By reminding that Seychelles has been hit by coral bleaching and recently cyclone Fantala, Mr Faure stressed that climate change has created new urgency for a more comprehensive framework to address the needs of small states.

In relation to the SDGs, he added that GDP (Gross Domestic Product) alone will not be enough to solve our problems and yet most multilateral development agencies remain fixated on categories based on GDP per capita to define access to concessional resources.

“We need to better measure the performances of our economies in relation to the Sustainable Development Goals and similarly we must benchmark international development policies against this objective,” he insisted, adding that Seychelles has always pressed for the vulnerability criteria to be considered in development frameworks.

“Without the adoption of appropriate vulnerability criteria in the development frameworks, small states, and small island states in particular, are facing the challenge of climate change with both their hands behind their back,” he argued.

In this view, the vice-president added it is essential that small states be able to mobilise domestic resources and at the same time complement them with foreign funding, to permit them to be climate resilient and attain SDGs.

He insisted that these states maintain the momentum necessary to ensure that funds are made available to the most vulnerable.

Vice-President Faure also voiced that faced with the urgency of the threat of climate change, small states should develop innovative mechanisms to boost their resilience, such as Seychelles’ debt for climate change adaptation swap with the Paris Club creditors.

The agreement, he says, has permitted Seychelles to buy back 22 million USD of its debt, with the further 5% discount plus interest generated by the repayments reinvested in climate change adaptation.

Unlocking the potential of our Blue economy is also an area of priority for small states to make the most of their comparative advantage, Mr Faure insisted. Announcing that Seychelles is in an advanced state of discussion with international partners for the creation of a Blue Bond which will make fisheries more sustainable and profitable, he said the concerned countries must be innovative in unlocking this potential and developing appropriate financing.

He concluded by asking the delegates to reflect on the role of small states within the global financial system, reminding that many of those states have lost correspondent banking relationships due to the selective rules around risk assessment and lack of engagement on their needs in relation to the international financial system.

While he agreed that the recent leaks associated to the Panama Papers raise legitimate questions as to how global financial rules need to be tightened, the former finance minister insisted that small countries should address those issues by committing to the highest possible standards in terms of exchange of information and anti-money laundering frameworks, while also exchanging best practices to better lead regulation, both within their jurisdictions and internationally.

“Let us ensure that we are part of the rule making and not just the rule taking,” he advised.

“Let us stand together for the wellbeing and prosperity of all our peoples. This is what the forum is about. And that is what the Commonwealth is all about,” were Mr Faure’s concluding words.

Speakers at the Biennial Conference on Small States include the Youth Ambassador of Jamaica to the Commonwealth Tijani Christian, Minister for Economic Planning, Sustainable Development, Industry, Information and Labour of St Vincent and the Grenadines Camillo Gonsalves who will speak about global developments and local realities, Seychelles’ principal secretary for the Blue economy Rebecca Loustau-Lalanne who will be making a presentation on how to finance the Blue economy, and chairman of the Seychelles Chamber of Commerce and Industry Wilson Nancy who will show how to build resilience and create an enabling environment.

Other topics being discussed are: small states in a changing climate; financing for development; perspectives for a resilient future, role of technical innovation in securing sustainable use of the oceans; building resilience through Innovation; and Singapore as a case study.

As outcome, the discussions are expected to generate important policy recommendations and informed national, regional and global development programmes.

Other than small states from across the Commonwealth, a wide range of stakeholders from government, business sector, civil society, educational institutions as well as major development partners are taking part in the conference. The latter include the United Nations (UN), International Monetary Fund (IMF), World Bank and Organisation for Economic Cooperation and Development (OECD).

Perseverance MNA and Airtel bring more cleanliness to the district   |27.09.2021

‘It is impossible to give up educating without renouncing education’ |27.09.2021