The Seychelles national anthem ‘En Avant’ was played by the band of the H. M. Royal Marines, 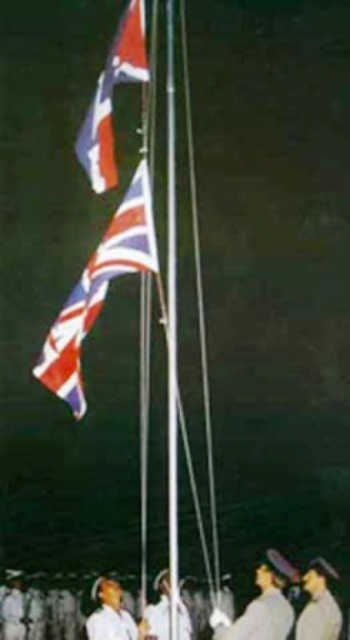 Royal Marines School of Music, wrote the Seychelles Bulletin in its June 5, 1976 issue.

In the same issue, Minister of Works and Lands, France Albert Rene, received a cheque for £10,000 from Mr Crane, the manager of Barclays Bank in Seychelles to be used for part of the independence celebrations landscaping work in Victoria.

Seraphin Madeleine is one of the two Seychellois police officers who hoisted the new Seychelles flag on the day the country got its Independence from Great Britain.

The other is Max Fontaine who has since passed away.

Seychelles NATION spoke to Mr Madeleine and he described how he felt on that day:

“I was very emotional, but proud on that day. As a young police officer I was chosen to hoist the new Seychelles flag. Our country had gained nationhood, breaking free from colonial domination. It was a very nice feeling.”

Mr Madeleine was aged 28 years old at that time and was an inspector in the police force which he served for 25 years, from 1962 to 1987.