Forty-seven male drug users from Mahé and Praslin are currently undergoing a special detoxification and rehabilitation treatment programme on Coetivy Island. Most of them are heroin addicts.

Yesterday morning, the Minister for Home Affairs Charles Bastienne, whose ministry is responsible for the programme, visited the 47 drug dependent persons to see their progression and the effectiveness as well as the shortfall of the programme.

Minister Bastienne confirmed that 300 more drug users are on the list, waiting to be put on the programme.

Other persons involved with the programme who made the trip yesterday were the deputy chief executive of the Islands Development Company (IDC) Ronny Renaud, principal probation officer in the department of social affairs Elsa Nourrice, Father Brian Volcère, chief superintendent of prison Maxim Tirant and home affairs representatives Florianne Vidot and Antoine Dupres.

The island programme administrator and his seven staff were already present on arrival along with the Coetivy prison inspector Julita Agathine and the island’s manager Michel Delorie.

The drug users, who have spent two weeks in rehabilitation centres on Mahé and Praslin, will spend six months on Coetivy as part of their 18-month rehabilitation contract voluntarily signed with the Ministry of Home Affairs. After the six months, they will be provided with jobs depending on their skills and they will be under constant supervision by the Ministry of Home Affairs.

Apart from medical treatment, the drug users start the rehabilitation programme as early as 7am for reflection and later they are placed in different work locations until lunch time.

Counselling session for all starts at 3pm and after the two-hour session they take part in physical exercises and sports.

For the time being, they rear animals, do a bit of agriculture, fishing, carpentry, maintenance and cooking as their daily work.

The drug dependent persons are also given an allowance to buy their basic needs.

“The programme is fantastic. The counsellors are very good but certain things need to be looked into. They told us that health personnel were to be available on a daily basis, I do not see them. Some have been going around with a toothache for one week, some have stomach ache,” said a frustrated Roland St Ange.

This is the first time such a large group is placed under a detoxification and rehabilitation treatment programme.

In a meeting with Minister Bastienne and his delegation in the Coetivy mess room, the drug users sought clarification on some issues related to work, entertainment but mainly it was the health issue that preoccupied them.

They were all complaining about the absence of medical personnel on a daily basis on the island.

Minister Bastienne, who was also being accompanied by a doctor and a dentist on the trip, told them that he had recognised this shortfall and assured them that things are being sorted out with the Ministry of Health as “it is in the plan to have a doctor, a dentist and a nurse in permanence to help you. For certain reasons, we are only getting the health personnel on an ad hoc basis but I have already started to seek for help for health professionals to be present on a weekly or fortnightly basis. But with the group getting larger in a few months there will be permanent health personnel available,” he assured. 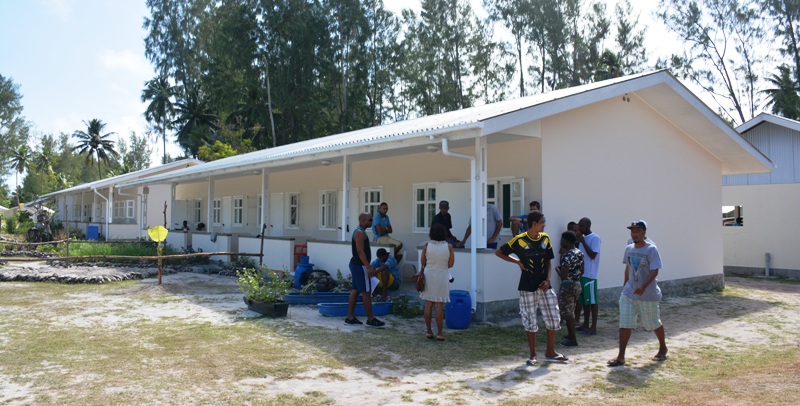 As most of the drug dependent persons were very eager to start working, a large piece of land was made available by the IDC to be used for agriculture. Some of the proceeds will go towards the sustainability of the programme, some to IDC and the rest as remunerations for farmers.

For future entertainment, a satellite dish will be put up very soon by Cable & Wireless for television reception and an exercise gym and a new volleyball court will also be put in place.

Minister Bastienne said a housing redevelopment is on the way to house more drug dependent persons coming for rehabilitation and detoxification and by the end of September to November over a hundred will be staying on the island. As some prisoners present on Coetivy will be working as IDC workers with a few being shifted back to Mahé, the prison will no longer exist.  Minister Bastienne confirmed that the island will as from November be a detoxification and rehabilitation centre for drug users

On the whole, Minister Bastienne was very satisfied with the implementation of the programme and the behaviour and signs of encouragement shown by the drugs dependent persons with regard to the programme.

Before the meeting, the prison chaplain Father Brian Volcère, assisted by the three Mauritians who were also representing ‘Zezi Vre Zonm’, gave their blessings to all in a mass held for the occasion.

On Wednesday at the Pointe Larue community centre, Minister Bastienne met a first group of drug dependent persons who voluntarily embarked on a newly community-based drug programme launched in July. The 21 drug dependent men have been following the month-long treatment and rehabilitation at the Wellness Centre at Les Cannelles. Along with the district administrator Julita Adela, nurses, counsellors, parents, wives and other partners on the programme, the minister discussed with the drug rehabilitation persons on the second phase of their treatment and also on the different programmes available to them at district level and identifying job opportunities for those who are unemployed.

For the next six months, the 21 men have to report to the district administration office every day for continuation of their treatment and that will be under strict observation of the counsellors and nurses who will be based at the district every day.

Pointe Larue was the first district chosen for such programme and Les Mamelles district will be the next one to benefit from the programme this month before being implemented in other districts.

The programme, a first in a district, forms part of the national effort in the fight against drug and to help those who are dependent on drugs.

A similar programme is being designed for women who are dependent on drugs in the communities.