Members of the sixth National Assembly of Seychelles – the nation's first legislative body not controlled by the president's party – were sworn in yesterday.

The 25 members voted into office in legislative elections held from September 8-10, plus the eight members chosen for the proportionate seats, took their oath of allegiance during the Assembly’s first sitting yesterday.

The sixth National Assembly of Seychelles elected Patrick Pillay as the new Speaker. Mr Pillay is the elected member of the Linyon Demokratik Seselwa (LDS) party for the Anse Boileau district. He becomes the third speaker of the assembly in the Seychelles third republic and the first one who does not come from the president's party. He replaces Patrick Herminie, who occupied the post for the past decade.

After taking the oath of allegiance, Mr Pillay said the new assembly will be a serious one that wants to see action and results for the people of Seychelles.

“We are here to work and show our compatriots who elected us that we are here to bring results. It is no longer time just to talk and talk,” said Pillay.

He added that the new assembly also has an important role to play to bring true democracy in Seychelles.

“We will never have an impressive economic growth, development and prosperity for our people without democratic practices, transparency, good governance in public service and the private sector,” he said.

The outgoing speaker, Dr Herminie, said the new assembly is a historic one. For the first time, the majority of seats – 19 out of the 33 seats – are not from the president's party, which puts the country in a position of cohabitation.

Parti Lepep, the party of President James Michel, had held the majority in parliament since 1993. It now holds 10 elected and four proportionate seats.

The Seychelles' constitution provides for a separation of powers between the three arms of government – the executive, legislature and judiciary.

“Cohabitation is not an easy political situation, but I am convinced that if we are all willing to work together for Seychelles, we can do it,” said Dr Herminie.

Mr Pillay also called for national unity and reconciliation and for “the country to do away with victimisation and intimidation of its citizens”.

He also called for fighting corruption, which he described as a “cancer that was destroying our society and affecting our economy”.

The role of the assembly, said Mr Pillay, is to ensure that the executive works in an efficient and transparent manner, with honesty and in the interest of the country and not for their own personal interest.

“In line with this, I want to promise the Seychellois people that we will work incessantly to bring our country back on the right path. This will be our noble mission,” he added.

The outgoing speaker, Dr Herminie, has spent 25 years in the National Assembly, including five years as a directly elected member, 10 years as Leader of the Government Business and the last decade as speaker.

Dr Herminie congratulated Mr Pillay on his appointment and said he has "the competence and ability to maintain the standard of the assembly and the ability to defend the authority and credibility of the chair”.

He also called on the creation of a bi-partisan forum “where we can discuss our differences and come up with what’s best for our country”.

The new assembly also elected its deputy speaker through a secret ballot, and the winner was Nicholas Préa, elected member of LDS for the Bel Ombre district. He replaces André Pool.

Speaking on behalf of Parti Lepep, Mr De Commarmond said his party congratulates the new speaker and will support him in this new task.

“It is our duty as members to remain focus and committed to ensuring that our institution remains at the highest level for the country’s benefit and that of our democracy,” said Mr De Commarmond.

"It is a new stage in our democracy and political development and we, in all our wisdom, should look at the best ways, through dialogue, to ensure our people benefit," said Mr De Commarmond.

The new leader of the opposition Mr Ramkalawan said LDS campaigned under the manifesto “Make it Your Assembly” and will maintain this throughout its mandate to make sure that the National Assembly truly represents the voice of the people.

Mr Ramkalawan said another motion will call for the setting up of a commission to look into allegations of corruption “and ensure that everyone benefits equally from the country’s riches”.

The new National Assembly will resume next Tuesday. 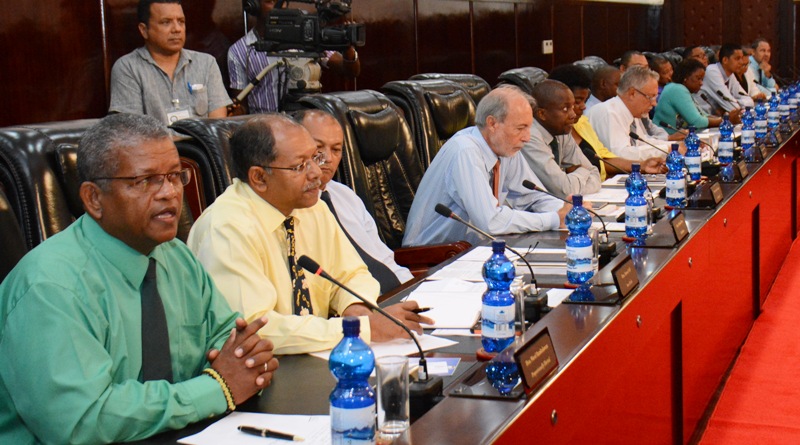 Members of the sixth National Assembly during its first sitting yesterday