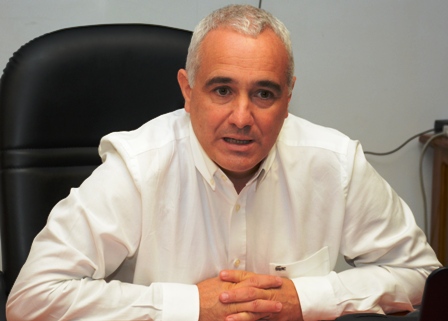 The two-day table-top exercise to test the country’s preparedness and response capabilities against oil spill pollution has been described as the most intense ever undertaken.

This was revealed yesterday by the director of the Division of Risk and Disaster Management (DRDM) Paul Labaleine during a de-briefing held at the division’s headquarters, Jivan Complex at Mont Fleuri.

The exercise was carried out in joint collaboration between the European Union (EU) Crimario project and the DRDM with the participation of various local agencies involved in accidents at sea with the aim of better preparing them if at any time Seychelles experiences such a pollution. They will know how to deal with it, what resources need to utilised, what training is needed to undergo after the exercise and elements that Seychelles will need which probably it will not have in order to carry out such a task.

Launched in July last year, the new EU CRIMARIO project aims to raise awareness of the above issues and tackle cross-border crimes in the Indian Ocean by developing regional cooperation and coordination between maritime agencies in the wider region.

The scenario for the exercise was that a tanker had run aground. Six hours later 25,000 tonnes of oil are spilled, generating an oil spill pollution in Seychelles waters and Plate Island was threatened. The responses of the various agencies involved were coordinated with DRDM being the key player.

“The exercise has been one of the most intense that has ever been done in that respect. We did such exercise before, but this one was more academic, more intense because you have to use all the elements that need to be done from preparation stage to the oil spill itself, the management of waste. In fact until the operation is completed,” said Mr Labaleine. The impact of an oil spill touches all aspects of the Seychelles life and economy, and all stakeholders involved have understood this very well.

He remarked that apart from the exercise, the event also consisted of a training component involving various stakeholders.

On the priority side of things, Mr Labaleine said any activity done at sea has consequences on marine life. So in dealing with oil spill priority areas should be determined and preserved first before tackling those that can wait.

As for the next step they will review their rescue plan as they pinpointed the weaknesses and DRDM will work with involved agencies one by one so as to set up a contingency plan. The EU will now and then conduct refresher courses.

Explaining why the EU is paying particular attention to the region in terms of security and safety, Olivier Bézier, component manager, training and capacity building of the EU Crimario Project, said the Indian Ocean is one critical maritime route of the EU where their oil and manufactured goods transit from West to East and East to West.  They are working with all countries in the Indian Ocean region like Seychelles, Madagascar, Mauritius, Comoros, Kenya to improve safety and security there.

And as Seychelles is particularly vulnerable to the threat of maritime crimes (hydrocarbon pollution, piracy at sea, illegal fishing, etc…), international assistance is needed, hence the involvement of regional coastal states and international partners and this crisis management exercise.

“We promote international and regional sharing of information related to what is happening at sea. It can be piracy, pollution as we emphasised yesterday, it can be also fishery and any kind of problem that happens at sea,” he said.

Regarding capacity of stakeholders involved, Mr Bézier said the fundamentals are there but improvement is always welcomed. And that any country facing such a full-scale event needs international or regional help. The Crimario Project is costing 5.5 million Euros valid from 2015 to 2018.