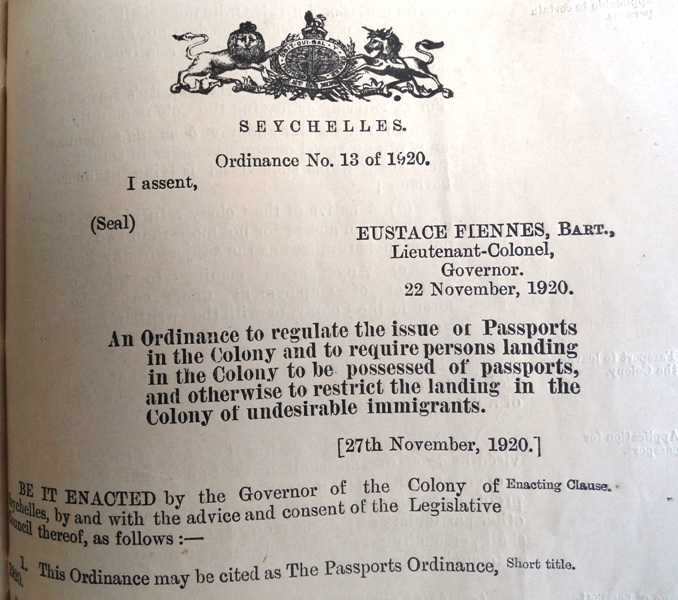 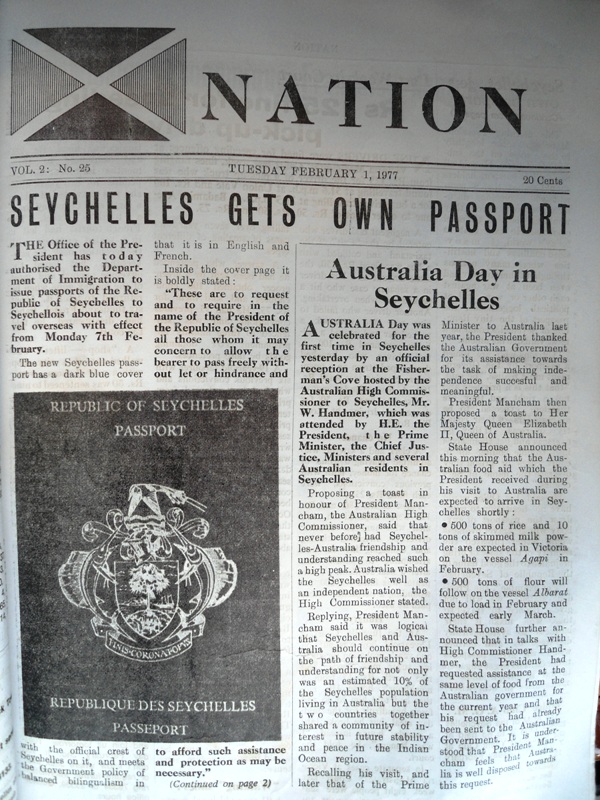 We learned recently that our Seychelles passport has been deemed to be the most powerful passport in Africa, enabling Seychellois nationals to visit 96 countries visa-free.  TONY MATHIOT traces its history:

It was on Monday February 7, 1977 that the Department of Immigration issued passports of the Republic of Seychelles for the first time.  This was in pursuance of and seven months after the passport Ordinance (Ordinance no 16 of 1976) had come into operation on June 29, 1976, when Seychelles achieved its Independence.  It had a dark blue cover with the official crest of Seychelles on it, and it cost R60.00.  The inclusion of wife in passport (which was allowed) cost R30.00.  The inclusion of a child cost R5.00.  Well, this ‘Independence passport’ as it became to be called would last for a mere one year and six months.

The first legislation pertaining to passports in Seychelles appeared in 1920 during the administration of Governor Sir Eustace Edward Twistleton-Wykeham Fiennes (1864-1943).  Published in the Seychelles Government Gazette no. 50 on November 6, 1920, it was a Bill of An Ordinance to regulate the issue of passports in the Colony and to require persons landing in the Colony to be possessed of passports, and otherwise to restrict the landing in the Colony of undesirable immigrants.  It contained 21 articles, and was aimed primarily at obliterating the concept of Seychelles as a safe haven for ‘destitute immigrants’ ‘Vicious immigrants’ and ‘Criminal immigrants’ who were liable on conviction to a fine not exceeding five hundred rupees and imprisonment not exceeding six months.  Leaving the Colony without a passport could also incur the similar penalty.  A ‘Visiting Officer’ was appointed by the governor to execute the provisions of this Ordinance (no. 13 of 1920).  The Ordinance came into force by proclamation on March 1, 1921, that is four months after its publication.  At that time, steam ships of the British India Navigation Company maintained a regular service between Seychelles and Mombasa, and anybody who wanted to come to our islands incognito could have arrived on vessels such as Karanja, Kampala or Madura.

Apparently, the Ordinance must have fallen short of its intended purpose, because by the end of 1921, it was repealed and replaced by Passport Ordinance 1921.  This Ordinance (no. 9 of 1921) besides lacking the prolixity of its predecessor, took action in regard only to passports.  Containing 8 articles, it was ‘An Ordinance to regulate the issue of passports in the Colony’.  It was passed in the Legislative Council on December 20, 1921 and published in the Seychelles Government Gazette no 56 of December 24, 1921.

Evidently, E. Taylor, J. B. Addison, F. P. Lousteau-Lalanne, L. Boullè, A. D’Emmerez de Charmoy and Wyndham L. Grech (members of the Legislative Council) and the Chief Justice Philip Bertie Petrides, who had assumed the administration of the Government of the Colony upon the departure of Governor Fiennes on March 13, 1921, had unanimously agreed that it would be pragmatic to have different legislations for passports and for the control of immigrants rather than a law that embodied regulations for both matter with which the Government was then greatly concerned.  So, it was that during the same session of the Legislative Council on Tuesday December 20, 1921, an Ordinance to restrict the landing in the Colony of undesirable Immigrants was enacted.  This Ordinance (no. 10 of 1921) was published in the same government Gazette.

Passport Ordinance 1921 remained in force for more than half a century, during which time it was subjected to periodic amendments for the convenience of different generation of travellers going overseas.  It was imperative as far back as 1921, for persons who were proceeding to the United States of America to have their passports, their British passports viséd by an American Consul.  A person travelling from Seychelles, a British subject had to arrange his journey so as to pass through a locality where there was an American Consul, otherwise he could be detained at Ellis Island, pending necessary enquiries.  But that was exceptionally rare, since it was almost impossible for a person to proceed from any of the British Colonies without passing through some locality in which an American Consul was stationed.  The only countries that had Consular Agents in Seychelles were: France, Italy, Portugal and the Nertherlands.

Not unsurprisingly, as one would expect of those days of the British India Company, The Royal Dutch Mail Line and The Scandinavian East African Line, whose vessels brought bewitched visitors to our then pristine shores and also made certain inhabitants eager to escape to some foreign lands, certain unscrupulous individuals were desperate to take audacious risks for reasons best known to themselves.  Such illegal incidents were happening too frequently that the Governor had to occasionally issue a proclamation ‘Requiring all persons entering or leaving the Colony to possess a passport’.

Governor De Symons Montagu George Honey (1872 – 1945) had to issue such a proclamation on August 7, 1930, to remind intending travellers to abide by the law.

In 1932, the price of a passport was R10.00.  Renewal was R1.50.  The fee remained unchanged until January 1, 1968 when it increased to R30.00.  By then, the number of Seychellois travellers had practically tripled.  During recent Colonial times (as from the early 1950s) the passport that was issued to Seychellois nationals who were then Commonwealth Citizens, bore the words ‘British Passport’ above the Royal Coat of Arms of Queen Elizabeth II and the words ‘Colony of Seychelles’ written below.

On June 29, 1976 when Seychelles became independent, upon acquiring their nationhood, Seychellois automatically lost the status of British subject and became citizens of Seychelles.  However, a person of Seychellois descent could retain his British nationality if his father or paternal grandfather was born in Great Britain or in a Colony that was not yet independent.

By 1976, after one hundred and sixty-two years (1814 – 1976) that Seychelles had been ruled as part of the British Empire, scores of Indians and Chinese residing in the Seychelles had acquired Seychellois citizenship by the fact that they had been naturalised or they were children of naturalised aliens.  They were thus automatically entitled to Seychellois passports.

It was on September 29, 1902, a year before Seychelles separated from Mauritius to become a Crown Colony, that Ernest Bickham Sweet Escott (1857 – 1941) enacted ‘An Ordinance to provide for the Naturalisation of Aliens in the Seychelles Islands’.  This was at a time when there was an influx of Chinese and Indian immigrants to Seychelles.  Many residents of Seychelles had already been granted naturalisation under the provisions of Mauritius Ordinance no. 21 of 1872, because during the time that Seychelles was ruled as a ‘district’ of Mauritius (1814 – 1903) it was a conventional mode of British Colonialism for Mauritian nationals to be appointed to various posts in the Civil Establishment of Seychelles.

When passports issued under Ordinance 16 of 1976 went into circulation in early February 1977, British passports which Seychellois nationals possessed became invalid.  Passport as compulsory standardised documents date back to medieval times, to the times of the Hundred Years War (1338-1453), when various English dynasties were claiming large parts of France. First mentioned in an Act of Parliament, the Safe Conduct Act 1414 made provisions for passports to be signed by the monarch. From 1794, it was signed by the Secretary of State.

Passports were written in latin until 1772 when French was used.  From 1833, English and French were used. In 1855, after large parts of Asia and Africa had been added to the British Empire, passports were issued only to British Nationals.  These were single-sheet documents.  British Officers who were posted in Mauritius and Seychelles were in possession of these “modern passports”.

At the outbreak of the First World War (1914 – 1918) when the British Nationality and Status of Aliens Act 1914 was passed, the British Passport was a single sheet folded into eight with a cardboard cover. It included photo of holder and had to be renewed after two years.

Our ‘Independence Passport’ unfortunately had quite a few defects which made it virtually impossible for the passport to last for the normal duration of five years, which is normally the length of time that a passport is legally valid.  The plastic cover peeled off easily after some handling, and the gold blocking of the Seychelles Crest on the front cover faded away to form an ugly patch of irregular discolouration, hardly befitting a new Republic’s travel document.  It also lacked certain basic security requirements that made it easy for important data to be tampered with without detection.

Consequently, in 1979, hardly three months after a new constitution had come into force (March 26, 1979) to form the Second Republic of Seychelles, the Government found it absolutely necessary to introduce new passports for Seychelles.  It was on June 5 (a date that was traditionally kept for inaugurations and launching of innovative schemes) 1979 that the Department of Internal Affairs presented the Seychellois public with their new passport.  Measuring 9cm by 12cm, containing 32 pages, the passport contained features which the Independence passport lacked.  For example, a special issue device was included to protect the holder’s photograph and to avoid fraudulent changes in signature and important dates.  It consisted of a transparent plastic sheet which was applied over the whole of the page containing the photograph.  The sheet has an active adhesive and any attempt to peel it off would destroy the entire page.  The passport number was perforated through the plastic sheet and through all other pages in the passport.  Moreover, it was our first bilingual national document, being expressed in English and French.  All these features are included in our current passport.  Our 1979 passport was printed by the famous British manufacturer of Banknotes and passports, De La Rue, a Firm established in 1821 by Thomas de La Rue (1793 – 1866).

During 1979, other amendments to the passport regulations were made.  The wife of a passport holder could no longer be included on his passport, which meant that all Seychellois above the age of 16 years would have to travel on their own passport.  The amendment did not affect legislation (Act 16 of 1976) providing for the inclusion of children under sixteen years of age on one’s passport.

*Other amendments to the regulation gave authority to army officers not below the rank of Captain and to registered medical practitioners to countersign passport applications.

On March 19, 1991, nine months before a multi-party system of Government was approved by an extraordinary SPPF Congress (December 3, 1991) the Passport Act 1991 came into operation.  This was to provide for the issue, renewal, cancellation or otherwise of passports and for connected purposes.  It was enacted by the President, France Albert Réné and the People’s Assembly. It contained 16 articles and has endured up to the present time.  Act 2 of 1991 therefore repealed Passport Ordinance 1976.

In 1997, twenty-seven years after it came into operation.  Our passport went through yet another series of changes ‘to meet world standards’.  This came at the recommendation of the International Civil Aviation Organisation (ICAO) that all member countries adopt the same machine readable format.  Three types of passports came into operation:  dark brown for ordinary citizens, red for diplomats and ministers and green for senior officials and members of the National Assembly.  The sizes of passport photos were reduced from 51mm by 64mm to 35mm by 45mm.

For the last twenty years, our passport has not been subjected to any more further changes – because apparently, as an international travelling document of the 21st century, it has reached the acme of perfection that will not need to change or to be replaced by anything else better for the foreseeable future.

Our Seychelles passport of 1979

The first passport Ordinance of 1920