A group of 18 officers from Seychelles and Mauritius who have completed a three-day training course in boat search to counter illicit trafficking in maritime environments have received their certificates.

The three-day training was funded by INTERPOL through a European Union (EU) project, Crimlea and the Norwegian funded project EVEX.

During the ceremony held at Reflecs 3, ex-Coast Guard base, the officers received certificates for the successful completion of the countering illicit trafficking in maritime environment seminar hosted in collaboration with the Naval Criminal Investigative Services (NCIS).

The certificates were handed over to the officers by the Commissioner of Police Reginald Elizabeth in the presence of the Minister for Home Affairs Mitcy Larue, key officials from the police, INTERPOL, NCIS other law enforcing agencies.

Following the presentation of certificates, both the Seychelles Police and the Mauritius Police received equipment to help them when con 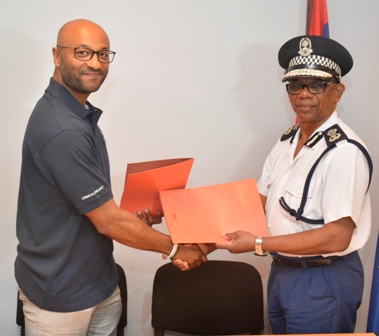 ducting house and boat search. The contraband detection kit ‒ CT-40 kit ‒ worth US $20,000 was donated by the INTERPOL.

An official document to that effect was signed by Commissioner of Police Elizabeth and Crimlea project manager Serge Epouhe.

“We acknowledge that whilst piracy activities have been contained, however the threats are not entirely over. Therefore we have to remain prepared and effective in the fight against maritime piracy in the Western Indian Ocean and in the Horn of Africa,” he said.

He noted the support received from INTERPOL last week on a maritime security course with the aim of tracing piracy funding for the dismantling of financial proceeds which remains relevant when these financial proceeds are being diverted to fund other transnational crimes.

“I am convinced that this course in boat search will also be instrumental in the fight against smuggling of drugs, arms and other illicit activities,” he said.

He also expressed his gratitude to the various partners ‒ INTERPOL, EU and Norwegian government ‒ for their continued support in the fight against piracy and for the donation.

Mr Epouhe expressed his gratitude to the EU, Seychelles, Mauritius, Norwegian government and all other partners.

He appealed to the authorities to make the equipment available to all the units and to use them appropriately.

He said it is important for INTERPOL to have countries joining together for regional cooperation.

Sec. Lt Luigi Loizeau said the three-day training has been very enriching and has increased and strengthened the capacity of local agents and partners from neighbouring Mauritius.

“We have been given knowledge and skills that we can use in the field that we operate in and the CT-40 is a state-of-the-art kit with new inventions that we can use to facilitate our job on the high seas and on land through agents such as NDEA. It will help us to cease contrabands and illegal narcotics,” he said.

Police sergeant at the anti-drug and smuggling unit, Vishnoo Padayachy said the training was very fruitful and they have gathered great skills and experience to take back to Mauritius.