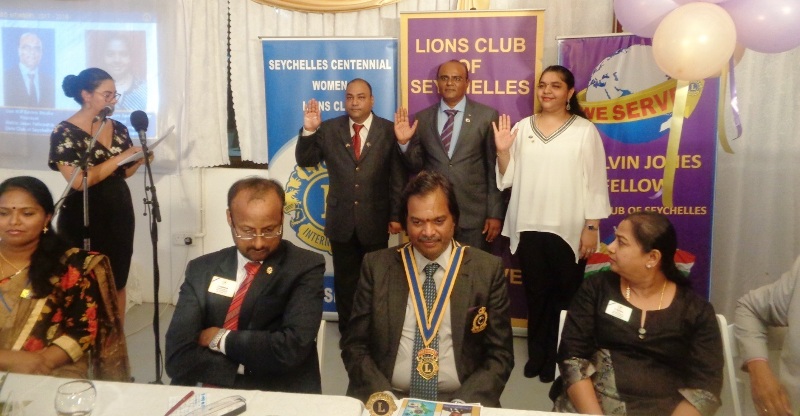 New office bearers of the Lions Club in Seychelles, Melvin Jones Club and Centennial Women Club for Lionistic year 2017-18 were officially inducted in a ceremony organised at the Golden Plate Restaurant on August 18.

The presidents of the three clubs are Lion D. Sashikumar (for Lions Club), Keshra Bhudia (for Melvin Jones) and Sashi Senthil Kumar (for Centennial Women Club).

The occasion also saw the induction of new members in all of the three clubs and new office bearers for various positions and everyone took the pledge that they will adhere to the principles of Lionism.

All the new club presidents pinned each of their club members.

Guest of honour for this memorable evening was International Director Lion K. Dhanabalan and his wife Lion D. Sashikala who had come especially to grace this occasion.

Others present included the chief executive of the Health Care Agency, Dr Danny Louange, officials from the Ministry of Health and other ministries, members of Rotary and other clubs, Lions members and their families.

Lion K. Dhanabalan from Erode, India, was elected to serve a two-year term as a director of Lions Club International at the association’s 99th International Convention held in Fukuoka, Japan on June 24 through 28, 2016. Mr Dhanabalan is a business professional. A member of the Lions Club of Erode Supreme since 1992, he has held many offices within the association, including club president, zone chairperson, district chairperson, region chairperson, district governor, multiple district GLT coordinator and centennial coordinator. In recognition of his service to the association, he has received numerous awards, including a Grand Master Key, two Leadership Awards and three International President’s Awards. He is also a Melvin Jones Fellow. In addition to his Lions activities, Mr Dhanabalan has been active in numerous professional and community organisations, including the Erode District Football Association, Greencity Institute of Leadership Training, Erode Blood Donors Club and Erode Officers Club. Director Dhanabalan and his wife, D. Sashikala, also a Lion, have one daughter and one grandchild.

As per International Director - Lions Club of Seychelles is one of the largest and most active service club organisations with approximately 1.3 million members across the globe and he believes that everyone needs to work hard to achieve the target of 1.5 million within the next one year.

He was impressed by the enthusiasm of Lions Club of Seychelles members as well as induction of a large number of new members to the Lions Club while retaining the existing members.

He emphasised the need to continue serving the community without expecting much in return.

The evening started with a welcome address by Lion Françoise, Lion prayer and singing of the national anthems of India and Seychelles.

This was followed by speeches by all three outgoing presidents and plans of the new presidents.

Lions Club was first launched in Seychelles in 1990, committed and focused mainly on helping the less fortunate with eye problems especially cataract.  In spite of its remarkable involvement in the community, the local Lions clubs were not being equally represented internationally. He felt that all the projects undertaken till date have been mostly financed by the donations, sponsorships of local companies and he feels strongly that Lions international must take note of our sincere efforts and assist  us with Lions grant by financing various projects which the new team would be taking over.

He added that the club has closed a few times earlier and that Lion Dr Selvam has tried to revive it and he will ensure in his capacity that Lions Club will never close again.

He added it is very important that all senior Lions assume higher positions in international forums considering Lion Mr Ramani, Siva Pillay, Dr Selvam etc have done wonderful service for so many years and they deserve to be given higher responsibility of representing Seychelles Lions globally.

On his part Dr Viveg requested the new team to build on the strong foundation set and achieve still greater heights.

Dhana Sashikumar thanked all the club members as well as everyone and added that she was proud of the efforts of the entire Lions team.

The evening ended with a  cultural programme and a sumptuous dinner. 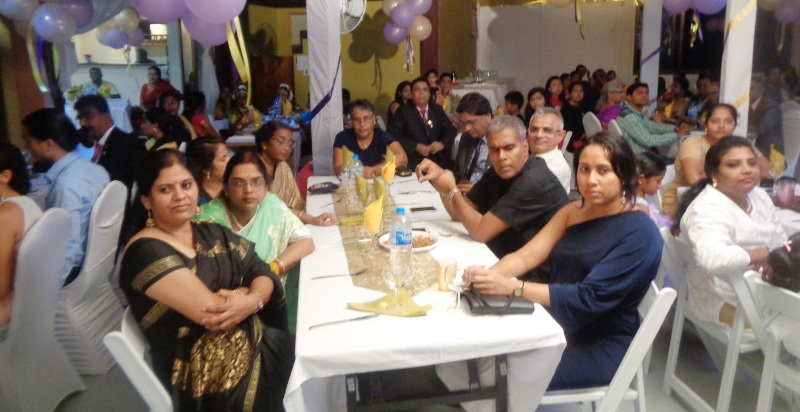