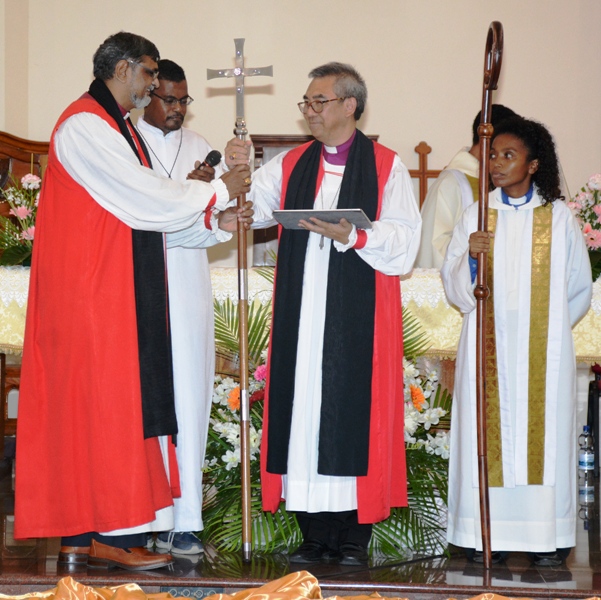 His election as the head of the Indian Ocean province took place on August 26 of this year at the Provincial Synod in Curepipe, Mauritius.

The presentation ceremony was held at St Paul’s Cathedral in the presence of outgoing Archbishop of the Anglican Church of the Indian Ocean Ian Ernest and former Archbishop of the same, French Chang-Him. It was presided over by the dean of the Cathedral, Reverend Daniel Kallee along with Anglican priests from all the parishes in the country and Father David Alcindor from the Catholic Church.

In his sermon Archbishop James Wong said the results of the election had come as a surprise but he nonetheless commits himself to serving the people of God in all the islands which fall under his care, namely Seychelles, Mauritius, Madagascar and Reunion.

Archbishop Wong told the congregation that the task he has been handed is not an easy one: “I have been entrusted with a humanly impossible responsibility but I know that God will hear the voice of His people and he will give me the strength and wisdom to do the task.”

He continued by affirming that becoming the Archbishop of a province is “not a prize to be won” but rather “a cup of self-sacrificial service to be drank”.

Archbishop Wong additionally thanked his predecessor Archbishop Ernest who has served in the position for 11 years and congratulated him on his efforts and successes, particularly in making sure that all the clergy in Madagascar do receive their salaries and pensions.

A lot however still needs to be accomplished especially since the Anglican dioceses in the Indian Ocean are now only beginning to understand who they are as a Provincial church, the Archbishop highlighted.

Henceforth one of his first duties as Archbishop will be to gather proposals from all the departments and commissions of the province by early next year in order to know their action plans and decide on a way forward.

Archbishop Wong’s presentation was preceded by the reading of his certificate of election as well as Article 11 of the Constitution of the Province which details out all of the Archbishop’s responsibilities. 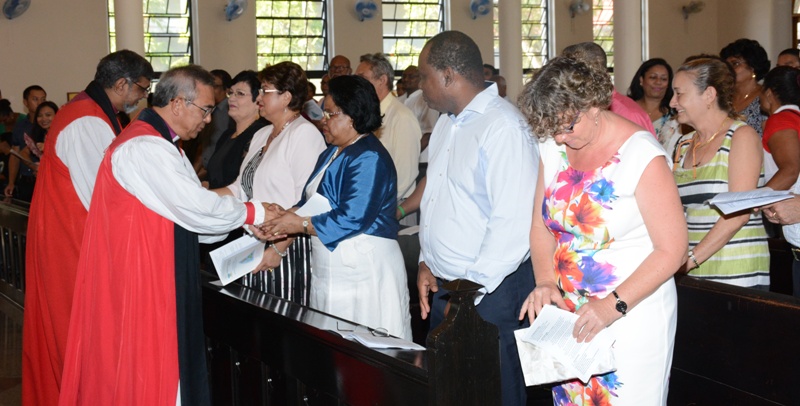 Father Simon Fred then addressed the congregation and asked if they were ready to support the Bishop in his new ministry to which there was the resounding response of “With the help of God, we will.”

The highlight of the ceremony was when Archbishop Ernest handed over the Archiepiscopal Cross to newly elected Archbishop Wong. The handover was received with enthusiastic acclamation from those in attendance.

In an interview with Seychelles NATION after the ceremony, Archbishop Wong listed down the challenges and tasks which await him.

“We have to firstly tackle problems relating to communications. Secondly, we have to get the necessary fundings for all of our activities… I also have to attend to the election of an assistant-Bishop in the south of Madagascar at the end of this year and another election of a Bishop also in Madagascar the year after that.”

The Anglican Church of the Indian Ocean province came into existence in 1973 and since has seen six Archbishops in total, including Bishop French Chang-Him.  An Archbishop’s mandate lasts for five years and can only be held a maximum of two times.