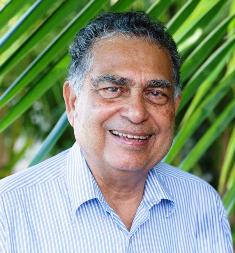 Popular businessman, philanthropist and the rock of the Valabhji family, Abhaye Valabhji, died on Wednesday November 22 at the Seychelles Hospital.

He was born at Victoria Hospital on June 17, 1933, to Valabhji Dharmachand and Chandubai and was the fourth of six siblings (Bhogilal, Ramniklal, Prasant ‒ all deceased ‒ Ashoka and Surekant, surviving).

Mr Valabhji founded his first shop on Albert Street in 1962 ‒ the launch of Abhaye Valabhji, Pvt., Ltd. He lived in his beloved Seychelles his entire life, with brief sojourns to the United States.

Defined by a genuine, contagious smile, the famous Abhaye smile, and a generosity that leaves all his children and family members humbled, Mr Valabhji did not hesitate in offering credit to all who needed it ‒ fishermen who needed outboard motors, families and taxi drivers in need of a car, musicians in need of instruments, housewives who needed household appliances.

He leaves his children with sad and heavy hearts, but with a well-defined path to follow – one with high principles and ideals of honesty, generosity, kindness, and hard work.

Friends and family are invited to a viewing and visitation today from 10.30am, followed by a service at 11.30am at Surya Memorial Hall, Mont Fleuri, Mahé. His body will later be cremated.

IN MEMORY OF A KIND MAN, MY BROTHER

With measured steps he went about his tasks daily

Executing them carefully and confidently

Whether it be repairing radios at night

Or working in the shop in daylight.

Out of his way he unflinchingly went

Helping those in need he was bent.

He invariably sorted out their trouble.

Always pondering his next move in words or action

He never failed to evoke a feeling of inspiration.

Smiling in his demeanor with an occasional

Burst of laughter he brought hope to one and all.

Naturally wanting to expand he opened his own shop

On Albert Street where many customers made a stop.

A permanent smile on his face Abhaye Smile

Was what he acquired to go the extra mile.

From home to shop he moved with dignity

Commanding respect in his natural ability

To sustain in his clients undying hope

And rarely to utter the word nope.

His name is Abhaye popularly known as Abay.

He helped his customers in every way.

His passing on has left a deep vacuum behind

Filled with memories of his being generously kind.

(WE WILL MISS YOU, AND YOU WILL ALWAYS BE

IN OUR HEARTS. PLEASE WATCH OVER US ALL

Land owner and contractor expected to be charged with illegal development |29.09.2022