Sharry Didon was the star of the Special Events Two competition as he improved the senior men’s 60m record, while comeback kid Norris Brioche cleared the bar at 2.10m in the men’s high jump. 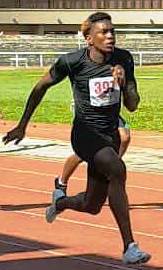 Inside the track & field garden at Stad Popiler last Saturday, Dodin, a member of the Port Glaud Shooting Star club, powered to the finish line of the men’s second 60m heat in a time of 6.88 seconds which has gone down as a new senior men’s 60m record.

The previous best of 6.92 seconds was held since 2015 by 100m record holder Dylan Sicobo who was, last month, crowned Sportsman of the Year 2017.

Junior category sprinter Stephano Bibi was second overall with 7.02 seconds and third place was taken by another junior runner Janosh Moncherry in 7.07 seconds.

Meanwhile, in the absence of Joanne Lou Toy, Arsu’s colt (under-14) sprinter Alkisha Rigodon won the women’s 60m race in 8.71 seconds and she was followed in second and third places by Melissa Bouzin (youth, Arsu) with 9.03 seconds and Allison Larue (girl, Arsu) with 9.10 seconds.

Although the athletes are classified in their age categories they ran together.

Arsu’s Maura Raoul again showed her worth by taking first place in the 150m women’s race with a time of 21.24 seconds, finishing in front of club mate Alkisha Rigodon (21.66 seconds).

Fast Track’s senior sprinter Leeroy Henriette, who came out second in the Special Events One competition, was determined to do better this time as he took the lead in the men’s 150m race to win in 16.20 seconds.

Only one female athlete ‒ Allison Larue ‒ showed up for the women’s 300m race and was added to the men’s line-up. Her time at the finish line was 51.66 seconds.

Port Glaud Shooting Star’s Stephano Bibi took the win in the men’s 300m with a time of 34.83 seconds and he was followed in second and third places by club mates Jean-Pierre Barallon (36.30 seconds) and Aaron Flore (36.97 seconds).

On the field, comeback kid Norris Brioche of the Inner Islands club, cleared the bar at 2.10m to win the men’s high jump. The junior category jumper’s result was 20cm higher than the result achieved by Fast Track’s senior jumper Leeroy Gamatis (1.90m). Arsu’s Joshua Onezime finished with a bar of 1.85m in the youth category and Cris Ally of the Inner Islands club finished with the same height.

The male long jump winner was Carlos Roucou from the Inner Islands who registered a distance of 6.35m. Menjel Kilindo (Port Glaud Shooting Star, 6.22m) and Mervyn Monthy (Arsu, 6.10m) completed the other two places on the podium.

Only one female, Rabella Bonne of Arsu, competed in the women’s javelin and she won it with a 25.93m throw.

There were three competition in the men’s javelin contest and victory went to Port Glaud Shooting Star’s Recardo Suzette with a best throw of 32.43m, more than 10m further than the 21.83m achieved runner-up Arnold Morel of Top Racers. Third place went to Don Henry with 15.80m

Port Glaud Shooting Star’s Elisha Marie was the only competitor in the women’s hammer throw and she finished with a distance of 24.60m.

Top Racers’ Don Henry was also unchallenged in the men’s hammer throw with a best effort of 31.20m for the win.

The male’s shot put was a challenge between five athletes and Michel Evenor of Port Glaud Shooting Star took first place with a 10.95m throw. He was followed in second place by Brandon Toule-Thilatier of Arsu with 10.65m, while Arnold Morel took third place with 10.57m.

The women’s event was a real challenge between winner Shamira Chang-Waye (8.55m) and runner-up Rabella Bonne (8.38m), both members of the Arsu club. Third place was occupied by Anisha Ernesta with 7.88m.

The final winners will be determined this coming Saturday when the Seychelles Athletics Federation will organise the Special Events Final competition.