‘Maritime security is an international priority’

Maritime security is not just one nation’s concern but an international priority that can be tackled only by working together in a concerted manner.

This was the gist of remarks made by the Mauritius-based US consul responsible for environment, science, technology and health for Seychelles and Mauritius, Jennifer Barr, during a workshop on the subject being held at the Savoy Resort & Spa, Beau Vallon.

These zones are the Gulf of Guinea, Indian Ocean, Horn of Africa and the Mediterranean.

The workshop, which was launched on Monday, has been organised by the Africa Centre for Strategic Studies based in Washington, USA.

The objectives of the training under the theme ‘Enhancing Maritime Security in Africa’, is to help states, zones and regions on the continent at large to strengthen their resilience against maritime threats and to create the space for Africa to meet its vast economic potential.

The training under the topic ‘Securing the Blue Economy’ will also enable the participants to learn ways to close gaps and seams between different efforts on maritime security in order to foster cooperation, collaboration and coordination around the entire African continent.

Speaking during a session yesterday, the special advisor to the vice-president for Blue Economy, Philippe Michaud, said that 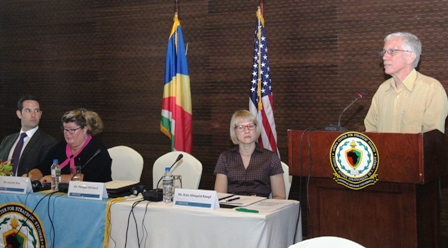 Seychelles has always turned to the ocean for its very existence and like many other countries in the world, has embraced the Blue economy model which is dependent on maritime security.

He added the Seychelles Blue economy concept is based purely on sustainability.

“Seychelles has learnt the hard lesson in 2008 and 2009 with the development of piracy off the Somali coast, near and in our EEZ. This clearly demonstrates Seychelles’ vulnerability to security risks costing some 20 million euros which represents 4% of 2009 GDP in lost tourism and fisheries revenue, direct cost of fishing piracy and increased fuel and shipping costs,” Mr Michaud said.

He noted that Seychelles enacted legislation to facilitate prosecution of piracy, improve its investigative and prosecution capacities and launched a 30-year rolling comprehensive maritime security plan of action (2010-2040) aimed at strengthening Seychelles’ role and capacity to safeguard maritime security and safety in its EEZ.

The Mauritius-based US consul responsible for environment, science, technology and health for Seychelles and Mauritius, Jennifer Barr, said that maritime security is not just a United States concern but it’s an international priority.

She put emphasis on working together to combat challenges that no one nation is capable of tackling alone.

“Through these relationships that we are forging, we build stronger partnerships, strengthening regional cooperation and providing better security,” she said.