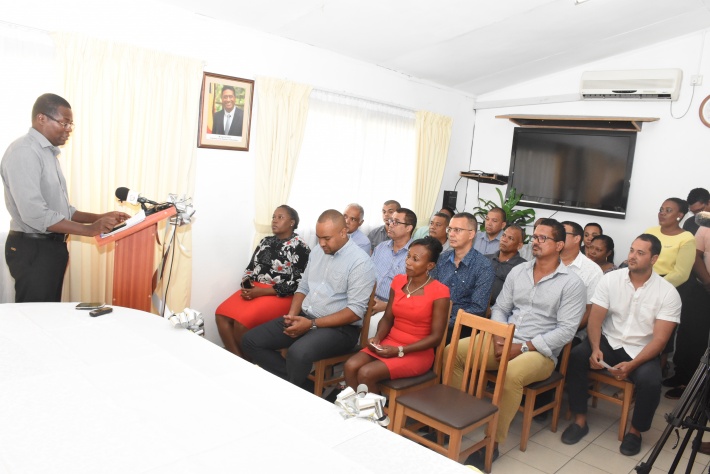 This was in the presence of the Minister for Environment, Energy and Climate Change, Wallace Cosgrow, LWMA chairman Aubrey Lucas, among other stakeholders.

The eight contractors started their new tasks on Monday April 8.

The municipal collection services have been divided into regions and a contractor has been awarded only one region to empty and clean bin sites in the districts as the tendering condition was for only one contractor for one region and not more.

Initially 10 regions were on tender for municipal waste collection services. The Victoria/Providence Industrial Estate region has been recommended for re-tendering while the Baie St Anne Praslin region is still in the appeal process stage and therefore, according to LWMA, the current contractors on those two sites will continue the cleaning services until such time that new developments in their respective cases are provided.

Before the new agreement, municipal waste collection all over Mahe was carried out by STAR Seychelles Ltd while BS Excavations and Explorer Investments cleaned the bins sites on Praslin and Island Waste Collection cleaned those on La Digue.

A tender process started in August 2018 with 29 bidders, including the four outgoing contractors – STAR Seychelles, BS Excavations, Explorer Investments and Island Waste Collection – submitting their bids to the National Tender Board.

Speaking at the gathering, Minister Cosgrow said the engagement of new multiple contractors in the waste collection process represents an evolution in the way the country will undertake waste management in terms of more manpower to clean bin sites regularly amid better maintenance and control.

For his part, Mr Joubert said the LWMA is targeting higher quality service to satisfy the general public, while the only lady contractor, Kathleen Jeanne of S&S Cleaning Agency said she is ready to take up that challenge and will do her utmost to make sure the community bin sites are kept clean at all times.

As for Barry Souffe, whose company was re-awarded the cleaning contract for Grand Anse Praslin, he has appealed to members of the public to use bin sites wisely and not to dump anything anywhere around bin sites. He further urged the public to dispose of waste destined for landfill at the landfill and not at bin sites.