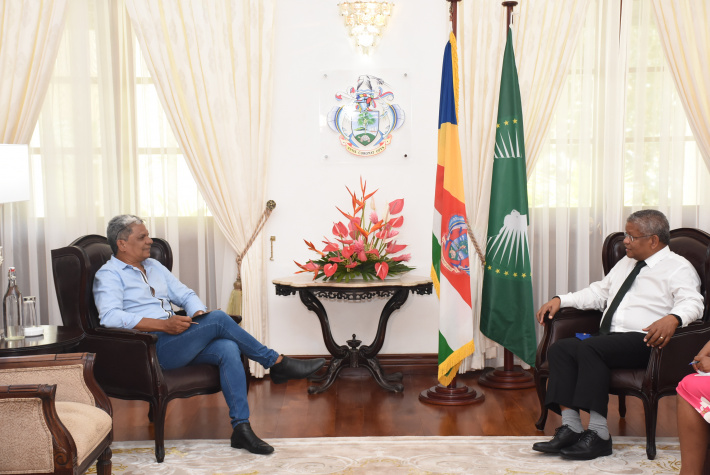 President Wavel Ramkalawan yesterday received Perrin Pierre who saved a tourist from drowning at the Grand Anse beach on La Digue on August 14.

A photographer by profession, Mr Pierre was taking photos on La Digue’s Grand Anse beach when he was made aware of a Hungarian tourist who was in distress some metres away from the shore.

Although there were over a dozen of people on the beach, no one took the initiative to go save the man who was drowning, hence Mr Pierre jumped into action to save him.

Even with rough seas and waves, Mr Pierre was able to save the man from the near-drowning incident.

President Ramkalawan met with Mr Pierre at State House to recognise the photographer for his heroism.

During their discussion, Mr Pierre raised the importance of placing facilities on beaches where drowning incidents occur to save lives.

“The president gave me his commitment, for instance providing the fruit vendors that operate on the beach with equipment that could be used for rescues,” stated Mr Pierre.

“I also brought up the issue that everyone uses the emergency line 999 but there should be a separate line for Praslin and La Digue. This is because the line is engaged when you call in for emergency so having one just for La Digue will see a faster response.”