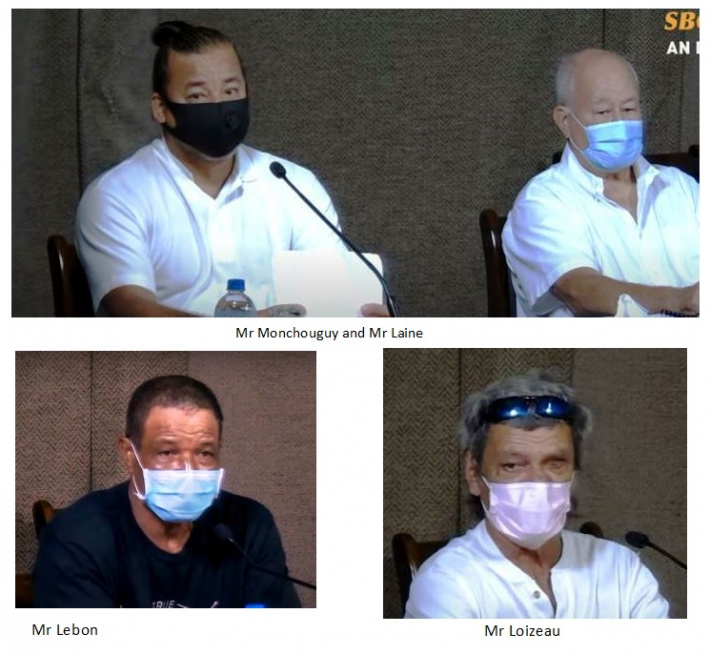 On behalf of the Monchouguy family, Rodney Monchouguy appeared in open session of the Truth, Reconciliation and National Unity Commission (TRNUC) yesterday in case 0458, sharing the family’s ordeal following the disappearance of their brother and son in December 1990.

It was precisely on Tuesday December 12, 1990 that Francis Monchouguy, aged only 19 years old at the time, left his parents’ home and was never seen again.

Accompanied by family member Barry Laine, Mr Monchouguy said as a Christian family, they need closure through a proper burial.

Mr Monchouguy said he was an active member of the Young Democrats group which was affiliated to the Democratic Party headed by ex-President James Mancham.

Going through previous incidents, leading to the disappearance of his brother, he noted that his father’s name was featured on a black list, prohibiting his movement after 6pm, while he was being constantly harassed by the military.

In 1985, his father was arrested for allegedly stealing five tyres from the Seychelles Public Transport Corporation (SPTC) and was detained at the Cascade Police Station.

Mr Monchouguy explained that the tyres at his father’s garage were of the Aurora brand, while those used by the SPTC were Michelin.

Based on that, Mr Monchouguy’s father won his court case and following that, his lawyer John Esparon was mysteriously found dead by the road side in his car.

As for his mother, who was a typist for the court house, her typewriters were seized by the police under the pretext the she did not have a valid licence for the job.

Mr Monchouguy said the family’s main income was through selling ice-cakes and banana cakes, while his father had to illegally practice mechanics work at home since he was not granted a proper license as a form of victimisation.

He also explained that their home was under constant watch, with boot prints being constantly noticed, while their phone was bugged.

In June 1991, Mr Monchouguy’s father was called at State House by former President Albert Rene who offered him a sum of money and asked him to leave the country, before placing an empty pistol on the table, giving him the option of shooting him.

The late Mr Monchouguy refused the money offer and Mr Rene warned him that whatever happens to him and his family will not be his responsibility.

The Monchouguy family stood their ground and decided to stay in Seychelles.

Regarding the disappearance of his brother, Mr Monchouguy said the last time he saw him, he was going to the Pointe Larue market to buy octopus.

He said the last thing his brother gave him was a tablet of chocolate and Coca-Cola before leaving and never to be seen again.

Mr Monchouguy said according to witnesses, a lady in a red car (Peugeot) gave him a lift to Anse Aux Pins where he was heading since he did not get any octopus at Pointe Larue.

The lady in question previously appeared before the TRNUC on several occasions as witness in other disappearance cases.

A week after the disappearance, Mr Monchouguy and his mother were shopping at ‘John Soka’ when they bumped into Major Samuel Charlette.

Mrs Monchouguy pleaded with him on three occasions for the truth about the disappearance of her son to which he ignored.

Mr Monchouguy said his mother told Mr Charlette that she will pray that he endured a painful death if he is hiding the truth from her.

Unfortunately for Mr Charlette, he passed away after his house caught fire a few years ago.

Mr Monchouguy also explained that the saddest part about the disappearance of his brother is that he was harmless, since he was epileptic.

He said he was targeted since he was vulnerable, compared to him who was always alert after being well briefed by his father.

Mr Monchouguy said nothing was done by the authorities to try and find his brother, making it so obvious that it was pre-meditated.

Giving his testimony on behalf of the family regarding the incident, Mr Laine who was living in England at that time, said when he received a call from her sister on December 23, 1990 he thought she was sending Christmas greetings, but was surprised to hear that Francis had gone missing.

He rang every now and then to see if there was any progress, but after a while realised that there would not be any change.

Mr Laine described the incident as a cowardly act, punishing a young boy who had just started his life, while it was the father who was voicing out against Mr Rene.

He explained that according to him, Mr Rene ordered his men to do something about Mr Monchouguy’s behaviour towards him but did not order them to kidnap one of his sons.

He said taking Francis was the easy way and a very cruel and coward act.

This, he said, is very difficult to forget and forgive, but since we are going through the process of reconciliation, it is import to look at things differently to help ease the process.

The second witness at yesterday’s hearing was ex-convict Ralph Loizeau who was supposed to be giving evidence in case 0220 filed by Marie and Bernadette Lespoir, regarding the brutal assassination of Marc Lespoir at the Grand Police Prison in 1996.

Mr Lespoir was serving a 10-year sentence for rape and assault and was due to finish his prison time a few days before his murder at the hands of soldier Joachim Bastienne who poured 12 bullets from his AK-47 into his entire body.

Instead of focusing on the case at hand, Mr Loizeau decided to give an account of his own ordeal at the Grand Police Prison.

He gave the commission details of several mistreatments, including torture, and hard labour that he and other inmates endured at the prison under the orders of the late colonel Macdonald Marengo.

In a short account on Mr Lespoir, the witness said what he remembers is that the former was supposed to see his lawyer Mathilda Twomey and that his meeting was at 1.45pm, instead of 10.30am as he thought it was.

He said Mr Lespoir told the prison authority that if they deny him the right to see his lawyer, he will jump over the fence of the prison.

Mr Loizeau said the late Mr Lespoir was arguing with the soldiers, including warrant officer Barry who was in charge of the shift, regarding his appointment, while Mr Bastienne was guarding the left tower.

He said Mr Lespoir attempted to climb the wall.

After losing valuable time with Ralph Loizeau, the TRNUC moved to case 047 where complainant Barnsley Lebon presented his case, regarding a beating he suffered at the hands of the army on December 23, 1984.

Mr Lebon, who was working as generation operator at the Public Utilities Corporation (PUC) at that time, said he was on his way to work the midnight shift when he was approached by two soldiers, namely the recently deceased Tony Mondon and Marcel Julie.

He said they asked him where he was going and he presented them with his work-issued pass, while telling them that he was going to work at the PUC.

Mr Lebon said they were not satisfied with his answer and guided him towards a parked car, next to Maison du Peuple building.

Once there, following directives from someone inside the car, the soldiers began to assault him with rifle butts, cables while they also kicked and punched him.

Still young and fit at that time, Mr Lebon said he managed to escape from his aggressors and ran towards the Victoria Fire Station along the New Port Road, not far from his workplace at the PUC power station.

Once at the PUC station, the police was called and he was taken to hospital.

He explained that the chief engineer at the station at that time asked him to write a letter regarding the incident, which he signed and sent to the President’s Office.

A few days later while working, he was informed by Georges Delpeche, who worked in the administration at the PUC, that the President’s Office wanted to see him.

Once there, he saw the late Ogilvy Berlouis in the presence of Philip Lucas and Raymond Bonte.

Mr Berlouis offered him a compensation which he refused, while the case was never heard of again, even if there were police statement and medical statement.