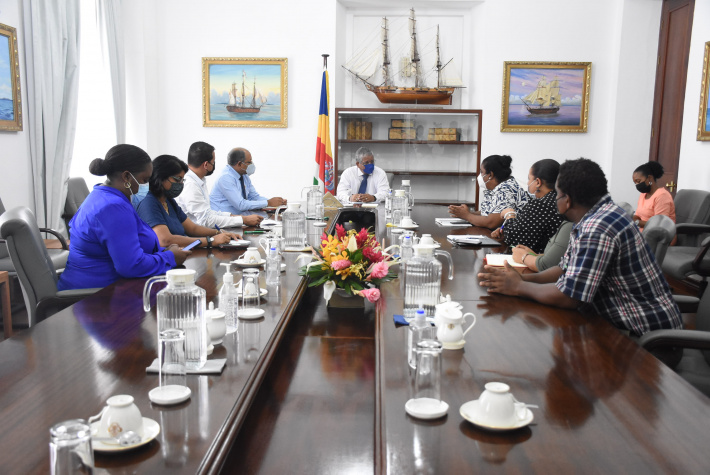 The meeting between President Ramkalawan and the executive committee of AMPS (Photo: Jude Morel)

President Wavel Ramkalawan met with the executive committee of the Association of Media Practitioners Seychelles (AMPS) yesterday at State House. The two-hour meeting initiated by AMPS was led by the head of state, and attended by Vice-President Ahmed Afif, chief press secretary Nadine Jack and the six-member NGO, led by its chairperson, Rassin Vannier.

Among the issues discussed during the meeting was who is responsible for the accreditation of freelance journalists as we no longer have a department of Information.

The President reassured the association that the Office of the Vice-President will appoint a liaison person for all media related matters and also the chief press officer at State House is also here to attend to the queries.

In the meeting, the issue of outdated laws which govern the profession and which are no longer relevant in a multi-democracy setting was also addressed.

He assigned the association with the task of conducting a thorough review of laws affecting the profession and highlighting the problematic areas which require attention, so that same could be passed on to the relevant authorities for action.

The President also announced to the committee that his cabinet has already agreed to amend the Defamation law and to change the defamation charge from a criminal offence to a civil one.

Other major issues raised were ethics and standards to raise the level of the profession and how to prevent the slow death of print media due to high production cost.

President Ramkalawan once again called upon media practitioners to go deeper into the subject which they are treating and not to limit themselves to merely scratching the surface of those topics.

He also stressed on the need for good faith in all interactions from both sides, to ensure a win-win relationship which will benefit the public.

Both sides also stressed on the importance of information, both access to and dissemination of, to ensure that the right information reaches the public in a timely manner.

The media association also called on the government to be more proactive in giving out information to journalists. It was agreed that the Vice-President’s Office, which has oversight of all matters relating to information, will designate a specific official as the go-to person for the media, to facilitate interaction between the state and those working in the profession.

The chairperson of AMPS, Rassin Vannier, came out of the meeting on a positive note. “At this moment, we felt the need to meet the President and bring about the different issues that are affecting our profession. President was very attentive to our concerns and on both sides, we were able to lay down our thoughts. This is the beginning of a dialogue and we talked about the laws, freedom of the press and the President agreed to help us so that we can play the role of educating the society.”

Mr Vannier also noted that the laws regulating the press in Seychelles date back to 1980s. “Now there are several media houses in the same landscape and there is a necessity to relook at the laws to include all media such as the Elections laws regarding the media where it mentions only SBC. In our two-hour meeting, we were able to raise several issues and AMPS has some work to do for a follow up meeting.”

The chief press officer, Nadine Jack, noted that “the meeting was fruitful for both sides where some concerns were addressed in line with the work of media professionals in Seychelles. The President thanked and acknowledged the community of media professionals in the country for their contribution towards the society and also helping in the education of our community. President also talked about the thorough investigation needed while doing a reportage and also how to be impartial in giving the news to the population. It was also an opportune time for the President to learn about the challenges that journalists are facing on the field and how to help improve their working environment.”

President Ramkalawan has expressed his commitment to addressing various concerns raised by AMPS and a follow-up meeting will be scheduled later this year.