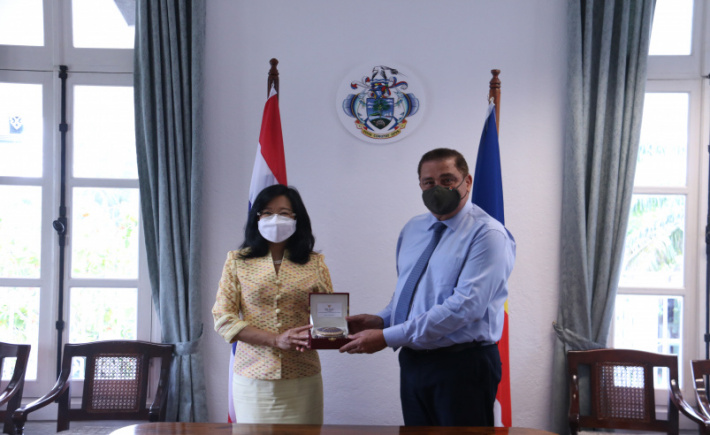 The newly accredited ambassador of the Kingdom of Thailand to the Republic of Seychelles, Sasirit Tangulrat, on Monday paid a courtesy call on the Minister for Tourism & Foreign Affairs, Sylvestre Radegonde, at Maison Quéau de Quinssy.  Ambassador Tangulrat presented her credentials to President Wavel Ramkalawan yesterday at State House.

Minister Radegonde welcomed Ambassador Tangulrat to Seychelles and noted “the enthusiasm to actively push things forward and do the utmost to further strengthen the bilateral cooperation between the two countries”.

On her part, the ambassador stated that this year marks the 33rd anniversary of diplomatic relations and that the two countries will continue to have very cordial relations and active cooperation, particularly in such sectors as hospitality, food processing and trade.

Both parties had lengthy discussions on future cooperation in the tourism sector, in particular, exchange programmes between tourism establishments and various training programmes in specific fields that may be tailor-made to better suit the needs of the country.