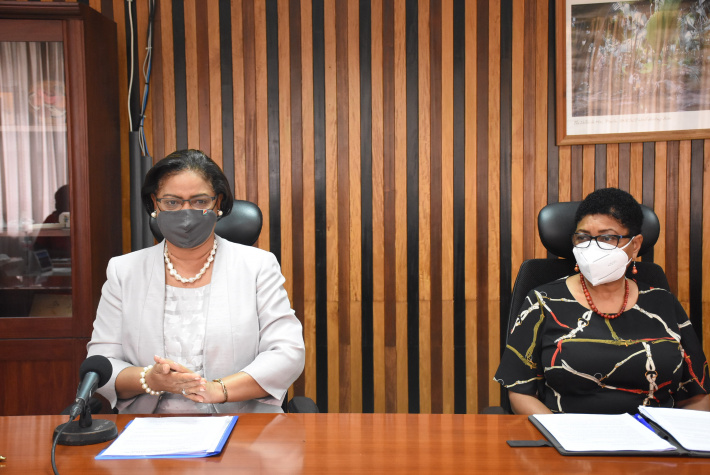 The Cabinet of Ministers on September 8 approved the submission of the Seychelles Initial Report on the progress of the implementation of the Optional Protocol on the sale of children, child prostitution and child pornography, to the United Nations (UN) Committee on the Rights of the Child.

Categorised in six parts, the report covers general measures enforced for the implementation of the protocol, prevention, prohibition and other legal frameworks, protection of the rights of victims and international cooperation and assistance, and the progress made by Seychelles with regard to implementing both the convention, and the optional protocol.

Minister for Employment and Social Affairs Patricia Francourt and principal secretary for Social Affairs Linda William Melanie in a press conference held yesterday at Independence House, noted that amid delays in drafting the report, stakeholders faced major challenges in information-gathering.

“We are aware that there are gaps and challenges that we need to continue to work on, to improve the situation of children in Seychelles, and services that would guarantee that the optional protocol is implemented to the maximum that we can,” said PS William Melanie.

“The gaps that we have in terms of reporting, the reporting obligations of individuals or children themselves if there are issues that are affecting them. For example, the issue of being forced into prostitution, if a report is not made to the appropriate authority for investigation, this constitutes a gap for us, as it doesn’t allow us to investigate the cases. In terms of services, we do realise that there are some missing links in terms of services for adolescents, which would have better safeguarded them from situations of exploitation, so these are some of the areas that we feel we need to improve on. Hopefully with the new sexual offences legislation that will come into force, we hope that some of the areas that we have identified as to services and gaps can be addressed, especially the duty to report when there are incidents, where children are being sexually exploited,” PS William Melanie noted.

Equally, considering the findings that children aged under 18 in Seychelles are engaged in sexual activity, behaviours that place them at risk of being exploited or sexually abused and the tendency to not report or go through with legal action in such cases, Minister Patricia Francourt called out to the population to each exercise individual responsibility, and to report cases of the sale of children, exploitation and abuse, for proper investigations to be conducted and legal action to follow.

“We have a duty to be able to safeguard our children irrespective of who we are. And when we are talking about our duty, it is also an obligation that reporting is actually done. We need to be able to empower our young children as much as we can, so that they understand about the decisions and options that they have. We also need to be able to work on prevention even more, so all ministries and agencies need to come together. We have the right to ensure that our children are protected, but most of all, to be able to go all the way with holding people accountable. This is paramount if we want society to be at a better place than what we are actually facing at the moment in Seychelles. Accountability is crucial,” Minister Francourt noted.

In addition, Minister Francourt highlighted the need to empower children from a young age to make better informed decisions and to better know their rights. She spoke of the importance of educating children from an early age to raise awareness about the dangers or certain behaviours, and to build their self-esteem towards safeguarding themselves from violations to their rights. Parents and the authorities must be more proactive in this fight, she added.

Upon submitting the report to the United Nations (UN) committee, the report will go through translation and evaluation. This will be followed by commentaries and recommendations, and an opportunity for the committee to seek clarifications. Seychelles will then be given a timeframe by which to submit another report.

As explained by PS William Melanie, the report is based on official statistics from the various stakeholders working with children, the police and Office of the Attorney General. Government sought the assistance of a consultant in drafting the document, as consultations kicked off at the beginning of the year.

The report for the original Convention is due next year.

Seychelles’ initial report on the progress of the implementation of the optional protocol on sale of children, child prostitution and child pornography report findings

The introduction of the report provides a general overview of the legislation and policies that Seychelles has in place considering the financial constraints and the cultural aspects of the country.

Seychelles has not to date recorded any cases or documented the sale of Seychellois children, or that they have been forced to engage in prostitution or been trafficked for criminal activity or forced labour. However, the authorities recognise certain sexual behaviours amid young girls and boys aged under 18, which could be seen as them engaging in prostitution, but reports have not been made to the police whereby a case has been prosecuted. All cases of sexual abuse which have been reported are investigated and where there is enough evidence for prosecution, cases are brought to court.

The report also highlights the challenges that technology offers in relation to pornography and the manner in which children put themselves at risk especially with social media, as evidenced by the surge in cases over recent years.

General measures enforced for the implementation of the protocol

Government is doing all it can to reinforce legislation on sexual offences on children. Sentences that are more severe are being given in cases whereby children are used across social media for sexual exploitation.

With the case which came to light recently pertaining to the abuse of around 75 under aged girls, a committee was put in place to revise laws on sexual offences, especially against children. The work is complete and the committee is awaiting another phase to go before the National Assembly.

There are yet any recorded cases whereby children under 15 have been forced to work, especially in the domains which the law does not permit. Regulations and policies are in place and clear, to ensure protection of children in the employment sector.

Trainings through different workshops and seminars have been held with different organisations, and children themselves through schools, on the topic of sexual abuse and child protection.

The department of social affairs and the National Council for Children (NCC) have held numerous sensitisation programmes on abuse and child protection within schools, with parents, and also through local media. These programmes are ongoing at different levels, and platforms.

The ministry of education ensures that Personal, Civic and Social Education (PCSE) is an obligatory topic in the school curriculum, to ensure that the topic of child protection is covered. There is also the student welfare structure which handles situations that affect children in all schools, and they give an appropriate service.

Sensitisation within the media is continuous either in the form of TV spots, or programmes which touch on familial life, and this includes child protection.

The social services division ensures that it takes all necessary measures to avoid any instances where children are removed from the Seychelles jurisdiction on false pretext. In cases of adoption by foreigners whereby a Seychellois child is to be adopted to go and live abroad, all measures are taken before a recommendation is made before the court. This forms part of the legal procedure to ensure that Seychellois children are not being sold after leaving Seychelles.

There are different provisions in the penal code that prevent such actions such as; the sale of children for sexual exploitation, prostitution, indecent acts, acts whereby children have access to, or are exposed to pornographic material, and to participate in pornography.

Their sentences are well defined. The law against human trafficking also makes severe provisions if a child is being groomed to be trafficked.

The Children’s Act gives the social services authority to keep the child protection register to permit the keeping of information on a person who has been convicted for child abuse. This register helps other organisations who need the information and who work with children, especially when it concerns any situations through which people may be coming into contact with children.

New legislation on sexual offences also proposes that a national register is kept by the state on all individuals who are convicted for sexual offences, against both children and adults.

Seychelles has signed numerous conventions and international treaties which means that it works closely with other states concerning children, and to obtain information when necessary.

The police also collaborate with Interpol when necessary, when conducting investigations and this is in line with different agreements which Seychelles has signed.