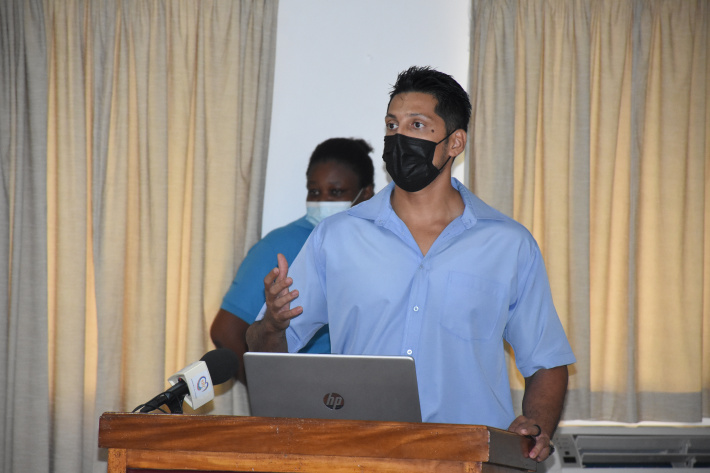 Licensed sea cucumber skippers have been enlightened on the stock assessment process of the species.

This meeting took place one week before the opening of the sea cucumber fishery next week and the skippers have to follow the new measures set earlier in September.

The aim of such a project, explained principal fisheries scientist at SFA, Dr Ameer Ebrahim, is to conduct a fishery independent survey of all local sea cucumber populations and their habitats on the Mahé plateau and several outer islands.

The result from the survey will be used to provide management with scientific advice towards reviewing current management measures.

“For the first time ever we have secured two teams of divers among the sea cucumber skippers to do the survey themselves. They will be accompanied by a scientist and the first leg will start on November 2 and this will go for one month, whereas the second leg will start in March next year,” explained Dr Ebrahim.

The specific objectives of this project are: to conduct a fisheries independent survey to assess the abundance of all sea cucumber resources; to provide information on the stock status of the main commercial species; to collect biological and ecological information on sea cucumber species (SFA started work on this under the SEACUSEY project  http://umr-entropie.ird.nc/index.php/portfolio/projet-seacusey);to understand the effect of exploitation on sea cucumber population and distribution and to provide management advice to guide the future management of the sea cucumber fishery.

Dr Ebrahim noted that currently the quota of sea cucumber has been reduced and after the survey, the quota will be reviewed again.

“All the divers and skippers understand the process and the meeting was mainly to answer any further questions on the stock-taking and before every season we retrain the divers on how to fill in the log book.”

Following a rapid expansion in fishing activities, the Seychelles sea cucumber fishery had been managed since 1999 after depletion in catch was observed.

To improve upon established management measures, several stock assessments, both fisheries independent and fisheries dependent, have been carried out in the past. However, the last fisheries independent survey that was carried was in 2005 and the SFA has found that there is a need for a new one. This research aims to conduct a survey of sea cucumber population and their habitats on the Mahé plateau and several outer islands.

The survey will consist of underwater visual census carried out by sea cucumber commercial divers in shallow areas (<20m) and remotely operated vehicle (ROV) in deeper areas (>20m). The survey will assess the abundance of all sea cucumber species and also the stock status for commercial species. Scientific divers will also dive alongside the commercial divers to collect biological and ecological data which will be used to improve our understanding of species biology. The effect of exploitation on sea cucumber stock will also be assessed by comparing fished areas with unfished areas, such as marine protected areas and deep areas.

The results from this study will be used to provide management advice and help towards informing new management measures for the fishery so that it can become more sustainable.

Sea cucumbers (Holothuroidea) are a large group of benthic invertebrates within the phylum Echinodermata. They are found in all major oceans, with a vast range of important ecological roles in marine ecosystems (Purcell et al. 2016).

Globally, there are over 1,200 species of sea cucumbers that have been identified and of those more than 60 species are currently being exploited commercially (Purcell et al., 2010). Sea cucumbers are traded around the world as “beche-de-mer” which is the boiled and dried body wall. The main markets for sea cucumbers are in East Asia, where increasing demand for this delicacy has led to a rapid increase in their exploitation over the last century (Purcell, 2014).

In Seychelles, reports of sea cucumber fisheries go back to the 1800s, however, the fisheries remained fairly small scale until the late 1990s when a rapid increase in catch was observed (Aumeeruddy and Conand, 2007). The increase in demand and price for “beche-de-mer” led to an evolution in the fishery from the collector type, where fishers collected on foot in shallow areas, to the use of scuba gears as they moved to deeper areas (Aumeeruddy and Payet, 2002). Historically in Seychelles, targeted species were black teat fish(Holothuria nobilis), white teat fish(Holothuria fuscogilva), blackfish(Holothuria atra), prickly red fish(Thelonta ananas) and flower teat fish, an unnamed species known locally as pentard (Holothuria spp.) (Aumeeruddy and Payet, 2002).

In the late 1990s, signs of decline in sea cucumber catches were observed and in 1999 the SFA introduced management measures for the fishery (Fisheries (Amendment) Regulations, 1999). Measures included issuing fishing and processing licenses and a limit on the number (4) of divers per licenses.

However, the management measures were precautionary due to a lack of baseline information on the status of the stock. The established measures were regarded as insufficient and a lack of catch data from fishers raised concerns over potential over-exploitation of the resource. This led to the temporary closure of the fishery in 2001. The fishery was reopened the same year with new management measures coming into effect. The number of fishing licenses was capped at 25, logbook and receipt books were issued to fishers and processors and catch reports were to be submitted to the SFA on a monthly basis (Aumeeruddy and Payet, 2002).

To improve upon the established measures, the SFA carried out a fishery independent resource assessment of the holothurian population between 2004 and 2005. The assessment indicated that some species like sandfish(Holothuria scabra) and yellowsurf(Actinopyga mauritania) were over-exploited, white teat fish(H.fuscogilva) and flower teat fish were fully exploited while there were others that were under-exploited. The high value specie, black teat fish(H.nobilis), was found to be under-exploited but localised depletion in the population was observed.

Recommendations for management measures were made which included, controls of the fishing effort so that it did not exceed the recommended total allowable catch (TAC), control in fishing effort for high value species close to the main islands, proposal to establish minimum size limits and the implementation of continuous periodic surveys to regularly assess the performance of management strategies (Aumeeruddy et al. 2005). Some of the recommendations such as the TAC limits was highly debated by stakeholders involved in the fishery and were not adopted in the reviewed management measures.

As part of a PhD research examining the fishery ecology, a fisheries independent stock assessment survey was carried out between2011–2013. Abundance of some species like lollyfish(H. atra) and black teat fish(H. nobilis) were found to have declined when compared to the 2005 SFA survey. However, blackfish(A.miliaris) in comparison was indicating an increase in their abundance from 2005 (Koike et al. 2017).

Another stock assessment was carried out in 2012 by MRAG, this one was based upon the catch and effort data reported by fishers to SFA in log books. The assessment comprised a spatially-disaggregated analysis of catch and effort data, the creation of a standardised commercial catch per unit effort (CPUE) series for the fishery, which was used as an indicator for relative abundance, and using surplus production models to estimate biomass and maximum sustainable yield. From this assessment recommendations for management were made which included introducing catch limits based on the recommended TAC suggested in 2005. Improvement in the collection of catch and effort data was also recommended to enhance the quality of data for more comprehensive stock assessment in the future. Following the assessment, new management measures were introduced, including minimum landing weight for white teatfish(H. fuscogilva), flower teat fish, prickly red fish (T. ananas) and black teat fish (H. nobilis) (MRAG,2012).

Following the recommendation from the 2012 stock assessment an agreement was reached between SFA and stakeholders to review the management plan in another three years. This led to another fisheries dependent stock assessment by MRAG in 2017. Evidence of significant population decline was observed especially for black teat fish in some areas (MRAG, 2017). Based on the report further measures were introduced including reduction in fishing season from nine months to eight months, a defined TAC and quota allocation. Fishers were allowed to target only three species of sea cucumber: flower teat fish, white teat fish and prickly red.

Following the 2017 fishery dependent assessment another important recommendation that was made was the need for new fishery independent surveys to fill in the gap in data identified. Considering that the last intensive sea cucumber resource assessment was in 2005, the SFA has identified the need to carry out a new assessment to obtain a better understanding of the current status of the stock. Majority of stock assessments carried out over the last couple of years were based on catch and effort data from fishers’ logbooks. Often these assessments are limited by the quality and accuracy of data collected and data are influenced by management measures and socio-economic factors. Fisheries independent surveys remove the bias encountered for catch and effort data and provide direct indication of abundance.

The results from the fishery independent survey will be used towards informing the next steps in the development of new management measures for the fishery. This will include reviewing the TAC for exploited species in use which is currently based on the 2017 stock assessment so that it reflects the current status of the stock. 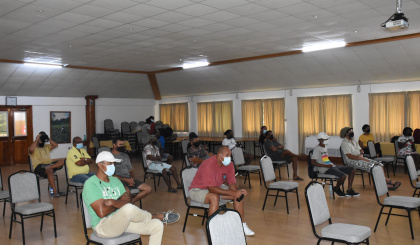