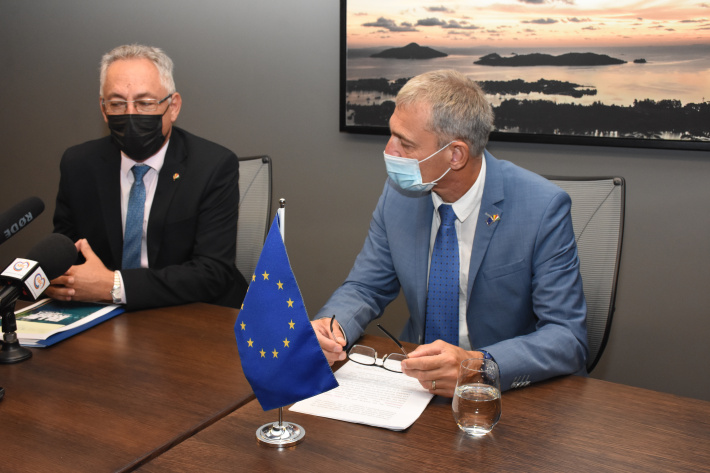 The Minister for Fisheries and the Blue Economy, Jean-François Ferrari, has said that Seychelles and the European Union (EU) have reached an agreement for a portion of EU funding to the country be used as payment of compensation to seafarers who had worked on EU fishing vessels.

Minister Ferrari made the statement at Eden Bleu Hotel yesterday during a press briefing following the closure of the 8th EU-Seychelles Political Dialogue.

The seafarers have been claiming for the compensation that dated over the past 16 years.

He said that if all goes according to plan, the seafarers will be paid their dues by mid-December 2021.

“The seafarers will have to understand like they agreed in our last meeting that although they will not get the full amount, they will get the maximum owed to them,” said Minister Ferrari.

The EU ambassador to Mauritius and Seychelles, Vincent Degert, said he was happy to have been able to talk to the EU member states concerned, the French and the Spanish fleets in particular, on the issue which has resulted in reaching the proposed solution which will soon be materialised and will close the long lasting dossier. He thanked Minister Ferrari for his effort and commitments to seek an end to the compensation issue.

“We are on the right track, on the right avenue to come to a solution and you can rest assured that we will expend all efforts on our side to find a suitable solution for all parties in this respect,” Ambassador Degert added.