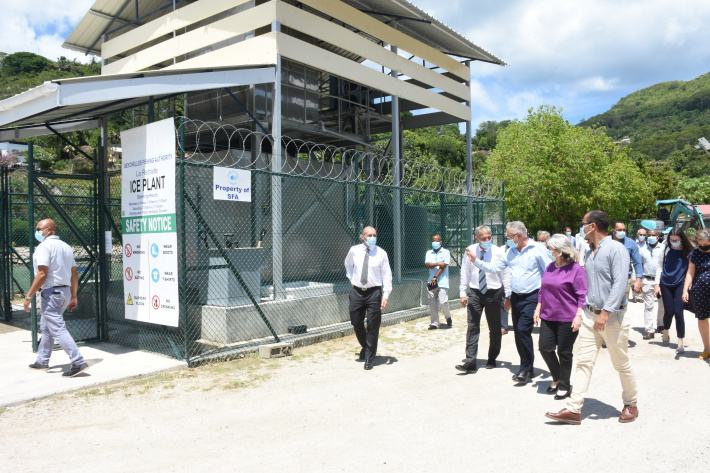 The Ministry of Fisheries and the Blue Economy, and the Seychelles Fishing Authority (SFA) yesterday conducted a visit to two community fishing projects funded by the European Union (EU), along with members of the EU who are in Seychelles for the political dialogue.

The visit commenced at the newly built La Retraite fishing facility complete with fish market, gear house and ice plant, where led by Minister Jean-Francois Ferrari, the delegation visited the facilities, before proceeding on to the project at Anse Aux Pins which is presently still under construction.

The delegation conveyed their satisfaction at the various projects and the operations at the La Retraite facility, as well as the progress made on the building at Anse Aux Pins.

Speaking to the media, ambassador of the European Union (EU) to the Republic of Seychelles Vincent Degert said they are satisfied with both projects and the investments made by government, which are as beneficial to the fishing community as they are to consumers.

“We are here to see the results of the financial support that the EU has afforded to Seychelles, in line with our fishing programme here. It was really important for us to be able to see concretely how the funds were used here. At La Retraite we saw that the infrastructure is of high quality towards ensuring the quality of the products and for consumers to be reassured that the fish that they are buying is clean, and for the fishermen, it ensures that they work in favourable conditions. For this, infrastructure is necessary, towards ensuring that they have resources as they set out in the morning. Therefore, the project is one which is really of advantage to the community, and the local fishermen here, which is what we aim to do”.

“These projects cost around R8 million or R9 million, so they are not small projects, but major investments that have been realised in these contexts and which have been put at their disposition. It must be noted that the fishing communities need to organise themselves to create a grouping or cooperative among them, to manage and maintain the facilities. In addition to making use of the facilities erected by the state, they must equally join in maintaining it. Certain ice plants were also built which is important as the fishermen need to be able to sell fresh fish that is well preserved, and they can even keep their catch fresh for multiple days if they wish to do so. They can therefore better sell their catch at a good price, and everyone wins as consumers benefit from a product of quality, while the fishermen have the infrastructure which is facilitating them. We are really happy to see this,” the ambassador stated.

In addition to discussing details specific to the two projects and others funded by the EU, the discussions also unfolded around the fight to combat illegal, unreported and unregulated fishing, a big problem in the Indian Ocean region, and efforts to reduce pressure on tuna stocks.

“It is estimated that at least 30 percent of fishing activities within the region is illegal, so if we want to preserve the resources, the tuna and the fish in the region, we need to combat against this and find the means to do so. The EU has invested a lot in this domain as well and we also need to have control systems aboard vessels to record fishing. Additionally, together with the Seychelles, we need to go to the Indian Ocean Tuna Commission (IOTC) which regulates a bit, as there is immense pressure on tuna stocks today,” Ambassador Degert added.

The EU have agreed to reduce tuna catch by 21 percent, but it is just as important that other players join them in their efforts, towards preserving and managing fish stocks in an intelligent and collaborative manner.

The La Retraite facility was officially inaugurated in April 2021 and comprises the fishermen gear store with 12 units and which cost a total of R1 million. The ice plant which became operational in October 2020 amounted to just under R200,000 while the accompanying fish market and lay-by was completed at a cost of R750,000. As for the pontoon installed at the site, it was completed in January, and amounted to R2.9 million.

The accompanying photos show the EU delegation being led on a tour of the facilities at La Retraite by Minister Ferrari and his team. 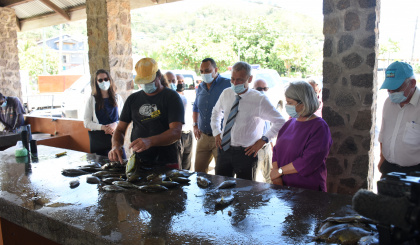