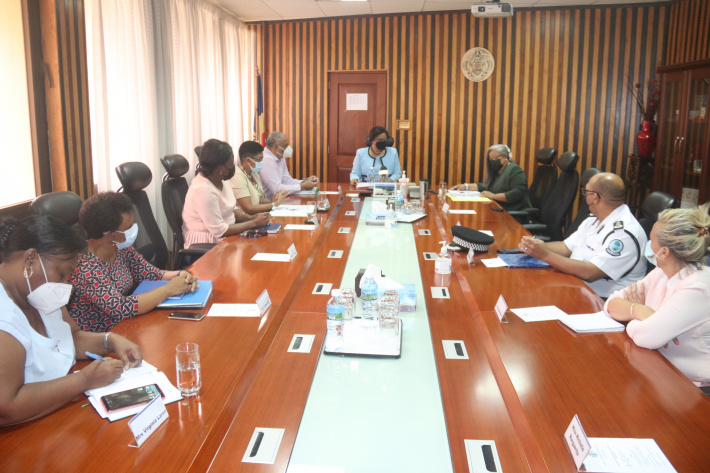 Minister Francourt launching the first meeting with the members of the National Commission for Child Protection (Photo: Joena Meme)

Minister for Employment and Social Affairs Patricia Francourt yesterday officially launched the first meeting with the members of the National Commission for Child Protection (NCCP), whose appointments were effective as of September 15, 2021.

The commission, comprising some new members and some of whom have been reappointed, is constituted by representatives of various organisations concerned with child protection, namely, from health, law enforcement, social services, and civil society.

In her launching address, Minister Francourt urged the commission to raise the bar higher and go beyond their advisory role towards strengthening services centred on child protection, prevention and prosecution in instances of violations of children’s rights.

The minister also called on the commission members to dive deeper than remedial actions, and to instead focus efforts 80 percent towards prevention, which are expected to “yield far better outcomes, raise the level of awareness for more protective measures thus reduce abuse of children”.

“I recognise that the Children Act provides the Commission’s mandate to be an advisory role but I note that it is more a dual role. The mandate does not stop after the meeting ends. It takes you to the next level. After the discussion and recommendation, you have to change gear. You become accountable to make things happen within your sector and area of expertise and to report back. In other words, you propose and recommend, you action, monitor and evaluate your actions and report. There is no break in the chain link, thus each and every sector can be as strong as the weakest link. I would say let us go for the former; for as a collective you should be strong and show the world out there the strength of this Commission.

“As the newly appointed Commission, my message to you is to raise the bar higher and set new targets to address the lacunas within and across sectors. Child protection is everybody’s business, from the parent to the person on the street who may witness an incident involving a child to the security guard at a school, the teacher, the nurse, the lawyer, the judge, the politician. The list can go on and on. The improvement and difference that can be done may seem gigantic but we can do it for our children. All that is needed is for each child protection partner to take  action to strengthen existing structures and processes that will allow the Commission to measure the impact and outcome of the various legislations,  programmes and actions taken during the course of your mandate,” Minister Francourt stated.

In moving forward, Minister Francourt expressed that she would like for gaps that still persist in relation to training of staff, prevention and advocacy at all levels, the identification and reporting process, as well as the investigation and prosecution process, to be bridged.

“There are areas affecting children that are of particular concerns for me; and I urge all partners to play an active role to address them with urgency and efficacy; we have noticed an increase in teenage pregnancies; are we doing our best to hold the adults accountable through the judiciary system? If not, what are the gaps? How do we bridge them?  The lack of a juvenile detention centre for our youths who are being caught up in crimes is still a cause for concern, our children caught up in criminal activities need support and rehabilitation more than ever before,” she said.

Moreover, she conveyed to the commission her concerns with regard to children who remain at risk of dropping out of schools, and who need access to intervention programmes that help them with behaviour modification and promotion of positive mental health.

She also proposed the creation of a Child Protection Clinic, whereby all services are under one roof.

Members of the commission had the opportunity to share with the minister their own concerns and visions for the commission over its two-year mandate.

Chairperson of the commission and health professional Erna Athanasius, assured Minister Francourt that they are moving forward as a reenergised commission. Similarly, vice-chairperson Linda William-Melanie highlighted the necessity to remain committed towards the cause, especially since Seychelles will next be presenting its second progress report on the United Nations (UN) Convention on the Rights of Children.

The commission will have its first official meeting on November 11, 2021.

The National Commission for Child Protection was previously an ad-hoc Committee set up in 1997 to advise on matters concerning children. In 2005 by virtue of the amendment of the Children Act it was given legal status. This legal status thus made all stakeholders within the child protection system to be more accountable to translate advice into proposals for policies and legislations, programmes and services for implementation within and across sectors in accordance with their mandate.