‘It is a way of securing the blue future of the Western Indian Ocean region,’ says former President Michel

Former President James Michel has called on all Western Indian Ocean Nations to continue presenting a strong common front and work together turning their ambitions of unleashing the potentials of the Blue Economy into concrete actions.

Mr Michel was presenting the opening remarks via video link for the global launch of the Great Blue Wall Initiative on Wednesday evening at the United Nations Climate Summit in Glasgow, Scotland.

The Great Blue Wall is a coalition of partners joining forces  for a nature-people movement under the leadership of Western Indian Ocean states, IUCN, the main coordinator and the United Nations Climate Change Champions to develop a regenerative blue economy while conserving and restoring marine and coastal biodiversity.

“This innovative model has the potential to become Pan-African, if not global. This would make the Great Blue Wall movement the first of its kind that was conceptualised and born in Africa to become global,” Mr Michel told delegates.

Acknowledging that the countries would not be able to do it on their own, he called on other countries and organisations with resources to “partner with us on this journey of unlocking the full potential of the blue economy, driven by conservation and regeneration”.

He also emphasised on the need to act now and fast for a big step forward, by doing things differently and by applying lessons learnt from past mistakes.

This high global launch was attended by ocean leaders like Sylvia Earl, who is also an honorary member of the Board of Trustees of the James Michel Foundation; UN secretary general’s Special Envoy for Oceans, Ambassador Peter Thomson; IUCN director general Bruno Oberle; the deputy director general programme, Stewart Maginnis and the regional head for Coastal and Ocean resilience for Eastern and Southern Africa, Thomas Sberna; ministers from several countries  including Minister Flavien Joubert who was representing President Wavel Ramkalawan as well as high-level representatives from the donor community.

In addressing the delegates, the IUCN deputy director general - Programme, Stewart Maginnis, thanked Mr Michel who he described as a real stalwart who really pushed the idea in Marseille.

He described the Great Blue Wall as Nature-based solutions in action.

Mr Michel for his part qualifies this innovative model as having the potential to become Pan-African, if not global. This would make the Great Blue Wall movement the first of its kind that was conceptualised and born in Africa to become global.

“This is the planet we need to fight for – a nature-positive world where blue prosperity will flourish across our vast ocean. This is the blue planet for our children and future generations,” Mr Michel concluded. 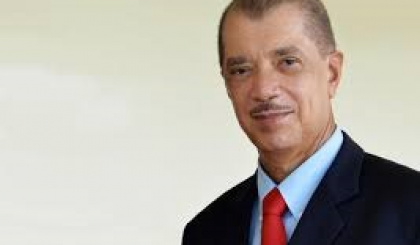