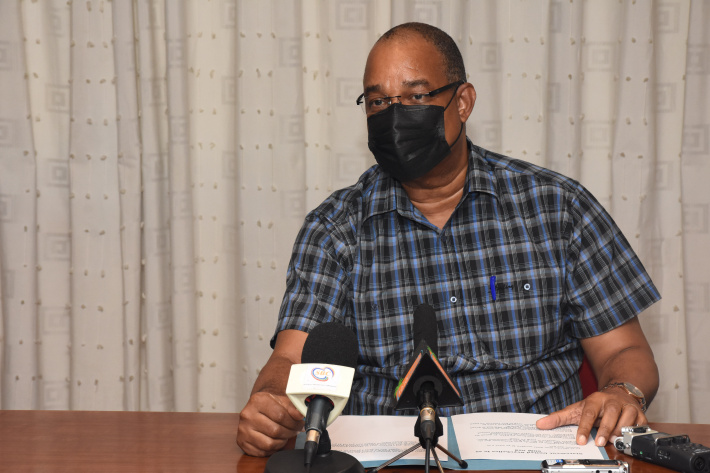 The United Seychelles party has expressed its relief at the new developments in the investigations of the missing US $50 million, hoping that it will soon be resolved.

United Seychelles party leader, Dr Patrick Herminie,  has also called on the Anti-Corruption Commission of Seychelles (ACCS) and the judiciary to ensure that they do their work in a transparent, fair and just manner.

It was in a press meeting yesterday afternoon at the Maison du Peuple that Dr Herminie reaffirmed the party’s support for the investigations being carried out by the ACCS, an independent body created under the former administration led by the United Seychelles.

Dr Herminie said the United Seychelles is following very closely the ongoing investigation in relation to the missing US $50 million grant donated by the United Arab Emirates in 2002.

“The party is very relieved that finally the investigation is being completed after many years that the saga of the US $50 million has been used as political propaganda,” Dr Herminie said.

He noted that United Seychelles’ wish is for the investigation to be one which is independent and transparent with the aim to bring an end to the scandal.

“We want to remind the ACCS and the judiciary that they are both independent bodies and it is therefore important that they do their work without any political interference and that all persons who are implicated in the case get a fair and just trial without exception,” Dr Herminie affirmed.

He said the United Seychelles is convinced that the ACCS has the necessary competence to pursue and conclude the investigations as soon as possible.

He further remarked that the country needs to put the scandal to rest as soon as possible in order to concentrate all its efforts into tackling all the economic problems that are seriously affecting our people and these include among many others, the high cost of living and the government’s decision not to pay the 13th month salary.

But asked why the previous administration led by United Seychelles did not manage to resolve the matter, Dr Herminie noted that since 2018 former President Danny Faure appointed a commission of inquiry to investigate the former state-owned enterprise Cosproh which was responsible to manage state-owned hotels and tourism properties through long and short-term agreements. The commission was also tasked with investigating the proceeds collected from the disposal or lease of the Cosproh properties. Dr Herminie said it took the commission some two years to submit a report on the matter to the president and this was just before the October 2020 elections.

“It was not a question of lack of willingness but rather the process took some time but it continued after the election of the new government,” Dr Herminie highlighted.

Meanwhile, what is the United Seychelles’ reaction to the rumours of a coup d’Etat?

Dr Herminie stated that President Wavel Ramkalawan clarified this week that the US $50 million saga has nothing to do with rumours of an imminent coup d’Etat that was being planned as was being circulated on social media.

“United Seychelles does not believe in coup d’Etat and the United Seychelles clearly states that there will not be any more coup d’Etat in Seychelles. People spreading rumours like this on social media should realise that this kind of publicity is not good for our country. With Europe currently experiencing alarming increases in Covid-19 cases, with many European countries expected to go into lockdown again, Seychelles can expect many booking cancellations in December. Already our situation is quite difficult and it would not be good for us to have a reputation like some African countries when it comes to coup d’Etat,” he remarked.

Dr Herminie said it is regrettable that some people who are looking for attention are giving the impression that they will fight against a coup that will not take place.

He has called on all United Seychelles supporters to remain calm, noting that there is no cause for any unnecessary panic.

Asked if his party’s declaration at this point would not be seen as political interference in the case, Dr Herminie replied that on the contrary, his declaration is showing that the party supports all efforts by independent entities to resolve the matter and this despite all attempts to implicate the United Seychelles in the scandal.

“I want to make it clear that the United Seychelles as a political party is not involved in the scandal,” Dr Herminie stressed.

Meanwhile, Dr Herminie has pointed out that when there was the government amnesty on arms, the United Seychelles was the only body which returned a gun which it possessed and as a party which abides by the law the United Seychelles is calling on all persons and organisations to respect the law and if they are still in possession of any arms and ammunition in the country to respect the law and return them to the concerned authorities.