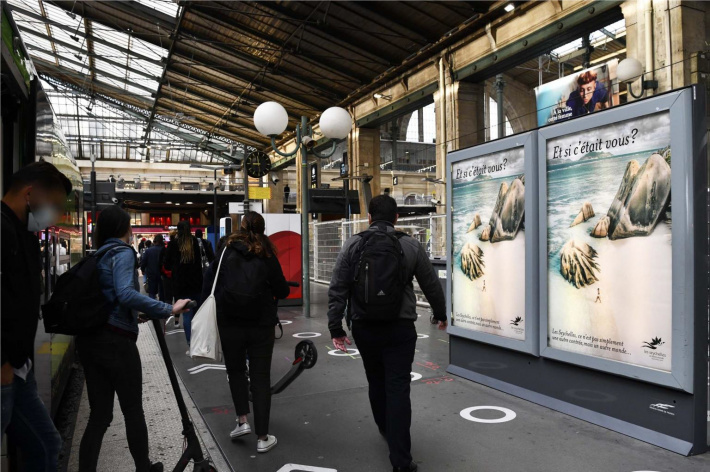 One of the billboards at a train station platform in Paris

Sights and sounds of Seychelles have hit the French market with full force through a multi-channel campaign orchestrated by Tourism Seychelles.

The campaign, which started in September, is running over a four-month period bringing a torrent of sunshine, outstanding locations and dreams of the warmth of the exotic Indian Ocean island destination to France as this key tourism source market heads into autumn and winter.

Initiated to increase and optimise the reputation of the destination on the French market, the project is part of a broad communication plan which will use a range of media platforms to send a strong message that Seychelles is open, and welcoming our French visitors, said Bernadette Willemin, director general for Destination Marketing at Tourism Seychelles.

“We launched the campaign working upstream, ahead of the restart of Air France flights to Seychelles, as we needed to have the destination visible to invite French visitors back to the islands. We know how difficult travelling can be at this moment and through our efforts we aim to inspire the greatest number of visitors to choose Seychelles for their next holiday out of the country, especially during this autumn-winter period,” said Mrs Willemin.

At the end of September and for one week, more than 38,530,342 potential travellers were already able to discover the famous landscapes of the island of La Digue, thanks to 1,200 billboards on 1200 train station platforms of Paris, its suburbs and the Provinces.

Shifting gears as of September 20 to October 19, 2021, the campaign moved on to Europe 1 Radio – one of the top five radio stations in France which also broadcasts in the French-speaking part in Belgium and Switzerland – through the airing of some 42 spots run throughout the four weeks and targeting an audience of 12 million. The spots, broadcast during prime time, allowed Seychelles to increase its visibility as an easily accessible destination where one can travel serenely despite this pandemic.

Not leaving any stone unturned, the Tourism Seychelles team then took the viewers of BFT TV by storm with the broadcast of a 20-second spot which ran daily for a fortnight from November 1-14. This segment of the campaign aimed at unveiling Seychelles in all its splendour for viewers to discover or dream about, with a total of 70 spots targeting approximately 21.2 million contacts aged 15 and over.

“Having hit hard for the first two months of the campaign, we are confident that our efforts have reached its goal of increasing brand awareness about the destination, and we are anticipating a boost in sales and increased bookings for the festive season,” said Mrs Willemin.

She further advised that the campaign has now shifted focus to maximise on the use of digital platforms and several reports in the press; the campaign took to every means to address every traveller specifically, those looking to explore new destinations in more specific niches, such as MICE, wedding or diving.

Several televised reports are expected in the coming weeks, notably on the TF1, Arte and TV5 Monde channels to present the culture and history of Seychelles, gastronomy, as well as the country’s preservation of its environment.

Through this large-scale campaign, the Seychelles archipelago seeks to unveil not only its outstanding beauty but also its authenticity, the diversity of its natural and cultural heritage and, not least, the warm welcome of its population.

Seychelles has already welcomed 152,345 visitors since the beginning of 2021 including 14,652 French visitors, which ranks France as the destination’s fourth-leading source tourism market. Since the arrival of Air France on October 24, France has led weekly visitor arrivals to Seychelles for the last four weeks.

The latest entry requirements and health procedures as well as all updated lists of operators currently licensed on site are available on the Ministry of Tourism’s website on: http://tourism.gov.sc/covid-19-guidelines/

With the continuously evolving Covid-19 situation Keeping Seychelles ‘top on the mind of visitors’ |13.01.2022