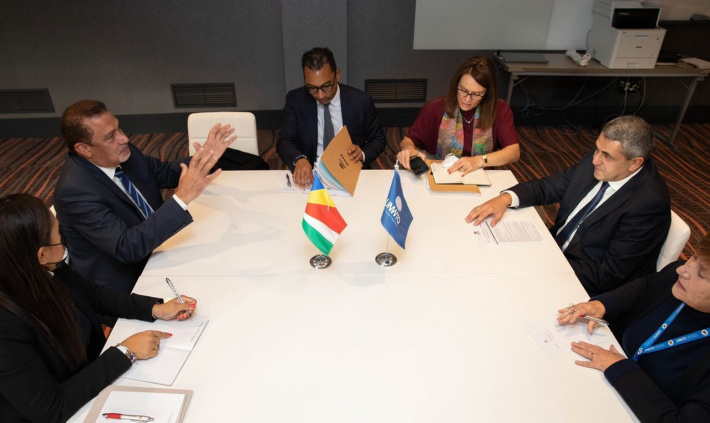 Minister Radegonde during one of his meetings

• Seeks support and technical assistance in policy development and implementation

A delegation led by the Minister for Foreign Affairs and Tourism, Sylvestre Radegonde, attended the 24th session of the United Nations World Tourism Organisation general assembly held from Tuesday November 30 to December 3 in Madrid, Spain, for member states to discuss issues affecting the industry.

Minister Radegonde was accompanied on this mission by principal secretary for Tourism Sherin Francis and senior protocol officer in the foreign affairs department Channel Quatre.

While in Madrid, the minister and his delegation had a tête-à-tête on November 29 with United Nations World Tourism Organisation (UNWTO) secretary general Zurab Pololikashvili who has been re-elected for a second term from 2022-2025. Pertinent matters affecting the Seychelles tourism industry were discussed during the tête-à-tête.

Minister Radegonde also held discussions with tourism ministers of several UNWTO member countries on how they can support each other in terms of exchanges and knowledge sharing.

The assembly provided the Seychelles delegation the opportunity to hold discussions with UNWTO’s senior technical team members on how to gather more technical support on key aspects of the sector’s strategic actions. Seychelles is seeking more formal support in areas of policy development for the cruise and maritime sector, in reviewing certain already existing sector policies, as well as for technical assistance in the implementation of the recommendations of the carrying capacity studies for La Digue and the ones for Mahé and Praslin, both yet to be approved by the Cabinet of Ministers.

The four-day event, which brought together 135 countries and 84 tourism ministers, consisted of two days of general assembly agenda items for discussion, approval and ratification, several committee meetings as well as two executive council meetings, one of which was the outgoing meeting for Seychelles, now passing its seat over to Mauritius for the second half of the four-year council mandate. Seychelles had served on the UNWTO executive council for two years.

The assembly unanimously approved the programme of work set out by the UNWTO for the next few years and endorsed key initiatives by the organisation which have been designed to build a more resilient, inclusive, and sustainable tourism. Amongst the initiatives to be launched are the Digital Futures Programme for small and mid-size enterprises (SMEs) designed to help small tourism businesses take advantage of the benefits of innovation.

The assembly also provided the opportunity for the secretary general and senior team to present reports to the members, outlining how the UNWTO has led the global tourism response to the unprecedented crisis caused by Covid-19.

To note, UNWTO was very active over the 18 months, a difficult one globally, rolling out a series of initiatives to help member states, including Seychelles, through the difficult period. These included collaboration and harmonisation of protocols, political advocacy and securing financial support for tourism.

During the last three years, Seychelles has benefitted from its membership of UNWTO through technical assistance for its tourism satellite account, a project which is expected to be completed in August 2022 and by which time Seychelles will have a fully-fledged process for collecting relevant tourism data and producing the right kind of tourism statistics. The tourism department also benefited from capacity building opportunities for its staff as well access to market intelligence data, which has helped in monitoring the effect of the pandemic on the Seychelles tourism industry as well as its recovery.

Seychelles became a member of UNWTO in 1991.