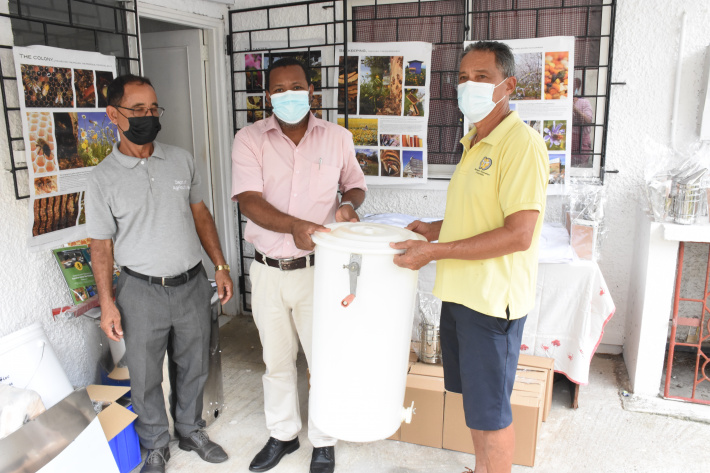 The Beekeepers Association of Seychelles has received a donation of beekeeping gear from the Ministry of Agriculture, Climate Change and Environment.

The donation, comprising protective clothing and smokers, was handed over by the principal secretary in the department of Agriculture, Keven Nancy, in a small ceremony yesterday at the office of the association, Union Vale.

The vice-chairman of the association, Patrick Samson, said they are grateful for the equipment which will benefit the association by promoting beekeeping as an art.

Mr Samson noted that rearing honey bees brings many benefits to the community as a whole, adding that in Seychelles we are lucky as the local honey bees are in good health and are not plagued by diseases that are affecting the majority of bees throughout the world.

“If we don’t promote what we have today, it will be dire for us in the future,” he emphasised.

Mr Samson has launched an appeal to the beekeepers in the community to join the association to further encourage and promote beekeeping in Seychelles.

PS Nancy has added that they expect to see more locally produced honey on the market as the beekeepers are now more equipped and has grasped the concept of beekeeping.

He said he hopes to also see more local fruit and vegetables on the market as the rearing of bees will also increase the chances of pollination.

Arthur Toule, the chairman of the Beekeepers Association of Seychelles, said that among the association’s aims is to raise awareness on the rearing of bees for the promotion of more food and beautification of the area.

He also stressed that honey has many health benefits as “it cures all ailments except death”.

The association has previously received beekeeping boxes as donation and the new equipment will give a boost the beekeepers’ craft.

Mr Toule hopes that the association will continue to grow and that in future it can depend on its own financing.

The association will soon be starting classes on beekeeping and welcomes all members of the public to join. 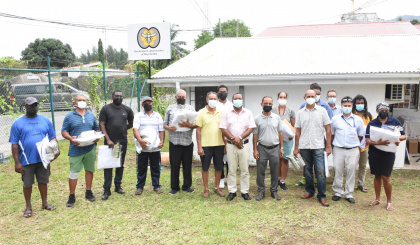 A souvenir photographs after the handover of the donation (Photo: Joena Meme)