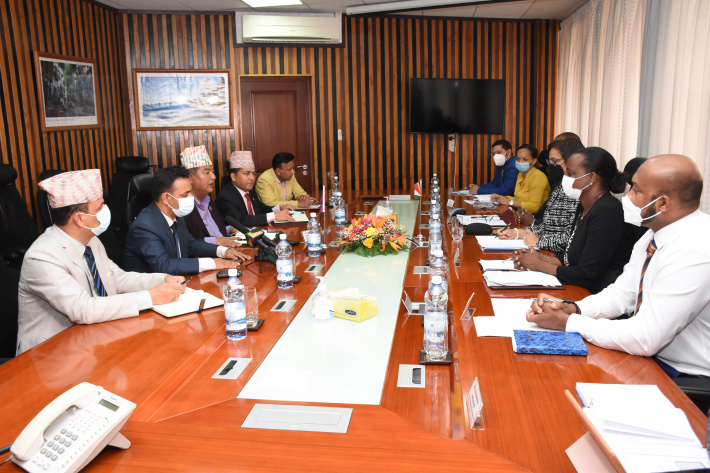 The two delegations during the discussion yesterday (Photo: Thomas Meriton)

The governments of Seychelles and Nepal are in discussion on a bilateral labour agreement to ensure protection of the rights of Nepalese workers in Seychelles, further to discussion on a request for the recruitment of 60 Nepalese security personnel for the Seychelles Police Force.

A four-member delegation from the Nepalese government, led by the Minister for Labour, Employment and Social Security, Krishna Kumar Shrestha, arrived in the country yesterday morning and in the afternoon they met with the Minister for Employment and Social Affairs, Patricia Francourt, and her delegation, for discussion on the bilateral agreement.

The meeting was held at the ministry’s boardroom, Independence House.

The signing of the bilateral agreement will enable ethical recruitment practices and clearly establish the obligation of Seychellois employers to ensure that the workers’ best interests are looked after.

It is anticipated that the implementation of the agreement will ensure that workers, before coming into our country, do register with specific recruitment employment agencies with a competent authority in Nepal. Workers will also have to be skilled and qualified for the post that they take.

Employment contracts are to be signed by the employers and by the workers as well. The latter are to be made aware of the terms and conditions in their contracts. They are also to be well prepared in terms of basic communication (English) and have knowledge of the life and culture of our country.

After she had welcomed Minister Shrestha and his delegation, Minister Francourt spoke a little bit about the country’s labour market and on the status and situation of the Nepalese workers in the country.

The minister said that our country’s labour market is very small with 50,000 informal workers in employment under a population of 100,000. With the un-employment rate below 5%, the minister remarked that the country continues to have a high demand for labour and a strong reliance on foreign workers.

There were 20,196 foreign workers in the country by the end of February 2022, out of whom approximately 1176 were Nepalese workers. The majority of them are employed in the economic sectors mainly in hotel establishments (429) in security and some in restaurants. There are 215 Nepalese working in construction, 130 working in public administration and defence (Police and Prison), 77 working in real estate while 75 are working in wholesale and retail.

Minister Francourt assured Minister Shrestha that the country has a rigorous and systematic guidelines and regulations in place, in its effort to safeguard migrant workers in the country.

She noted that only a minimum of Nepalese workers have lodged their grievances at the ministry, mainly in regards to unjustified terminations. She added that no grievances were registered in 2021 which in itself was encouraging.

In highlighting the wish of the government to sign a bilateral labour agreement with Nepal, which is also part of our country’s National Migration Policy, Minister Francourt conveyed our thanks to the Nepalese government for recognising the need for the agreement which has been long overdue. Her ministry has already received the last draft of the bilateral labour agreement which has been reviewed internally based on previous comments provided by the Employment department.

As for the recruitment of the 60 security personnel for the police force, Minister Francourt stated she hopes that all logistics are going well and as best as can be.

In concluding Minister Francourt thanked the Nepalese government for helping in finalising the agreement which is of mutual interest to both governments to ensure protection of the rights of the Nepalese workers, their welfare and good working and living conditions while in employment in Seychelles.

She noted that the agreement may also help in experiencing greater migration flow between the two countries.

For his part, Minister Shrestha said that his government was very happy to be expediting the bilateral agreement with our country in which both countries are committed to moving towards the proposed agreement.

Minister Shrestha stated that apart from working for the respect of the rights of Nepalese workers with our government, such agreement is also being undertaken with other countries employing Nepalese workers.

He noted the fact that there have been no grievances on the part of the Nepalese workers in 2021, indicates that our country acceptance for the Nepali people and that the bilateral agreement is testimony of how both countries are committed to protecting the rights and safety issues of migrant workers and to eliminate unfair practices that lead to human trafficking.

He said that his government will exercise all the required conditions in the agreement, once it is signed, for the benefit of both countries.

He also emphasised that both countries to also make use the bilateral agreement to work together to link the regime of foreign employment with other sectors in a way to possibly enhance more the friendly relations between the two countries.

The signing of the refined agreement after the discussion is expected to take place in Nepal.