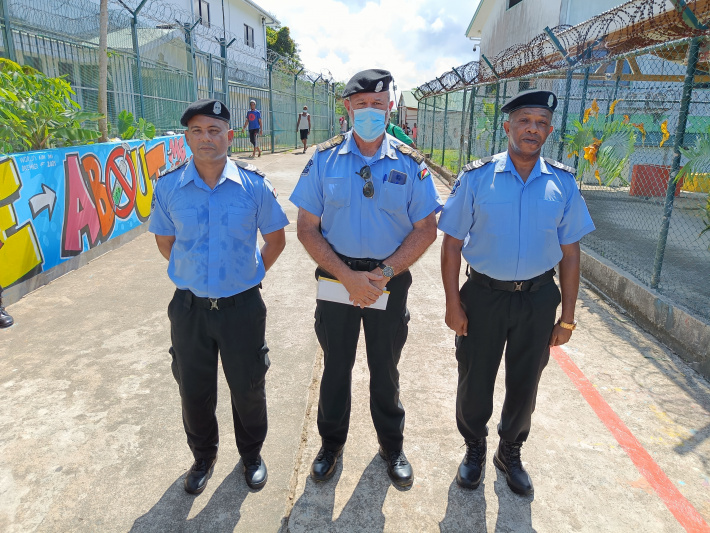 The new sergeants with the Commissioner of Prisons (centre)

Two prison officers – Ivan Nicholas assigned to the prison escort unit and Daniel Camille assigned to the custodial department at Montagne Posée prison – have been promoted to sergeant.

The two newly promoted sergeants received their sergeants’ bars during a short ceremony at the Montangne Posée Prison on Saturday presided over by Raymond St Ange, Commissioner of Prisons, and attended by other members of staff.

Addressing the new sergeants and all others present, Mr St Ange said: “Officers, we are here to serve with integrity, professionalism, and with high values required of this very demanding job. The prison service is certainly not for everyone as it demands and requires of the person serving the acumen, the strength of body and mind, the perseverance, the good character, to be able to stand and deliver what is expected, as challenges are faced head on. Those who today are being promoted have demonstrated to date their ability. I commend them.”

Officers being considered for promotion to sergeant had to sit for a written examination and had to pass. Both officers being promoted were recognised for having scored the top marks out of a number of other members of staff who also sat the exams.

Commissioner St Ange also said that he would further welcome the new sergeants at the next meeting of sergeants that is normally held twice yearly.

The next round of promotions is expected to be conducted at the next Prison Service Week, which will be held between September 6 and 11, 2022.