A mini clean-up exercise took place over the weekend with the aim of instilling in the public a sense of responsibility when it comes to managing their household waste.

Organised by the Landscape and Waste Management Agency (LWMA), the mini clean-up ran from Friday April 8 to yesterday, April 10, on Mahé, Praslin and La Digue at all three landfills to encourage the public to remove waste from their residence, sort it and throw it away responsibly.

The deputy CEO of LWMA, Rahul Mangroo, said the activity is similar to Clean-up the World except that it targeted only residential homes.

The agency also put in place a new method of disposing of waste. People had to sort their waste before coming to the landfill and upon reaching there each waste product is sorted in skips (green disposable containers) according to the type. Over the weekend the public did not have to pay to enter the landfill if they had sorted their wastes accordingly. Those who came with unsorted waste had to pay the normal fees.

People did not have to enter the landfill but stayed near the entrance whereby they disposed of their wastes in the allocated skips, a system which Mr Mangroo said was highly favoured.

The deputy CEO said the number of people that showed up with sorted waste compared to those with unsorted waste is 50/50 (16 tonnes unsorted and 16 tonnes sorted).

The type of waste that the LWMA saw being brought in the most was scrap metal followed by bulky waste and green waste on all three islands.

The technical advisor for LWMA, Camille Mondon, said the event was well received by the population with about 40 trucks that came in per day on Mahé. On Friday there were 30 trucks with 58 e-waste with a total clean up of 11.2 tonnes. Saturday the landfill received 39 trucks with 44 e-waste and 11.5 tonnes in total. For Sunday 43 trucks showed up with 52 e-waste, 2.8 tonnes from skips (sorted 1.2 tonnes of scrap and 1.6 tonnes of bulky). The landfill on Mahé had a total of 32.4 tonnes of waste including waste sorted in skips and the unsorted waste.

Kathy Uranie, the acting chief inspector of LWMA on La Digue, said the event did not go too well as there was a lack of awareness on the event.

She said the majority of truck drivers they questioned did not know the event was taking place.

La Digue had only six trucks that went to the landfill on Friday and the acting chief inspector hopes that the next time they hold the event hopefully there will be more participation from the public.

The landfill officer on Praslin, Berty Joubert, said the mini clean-up Seychelles on Praslin also did not see much participation from the public as most people wished the event would have been held during the week.

Mr Joubert also noted that they received quite a bit of dispenser plastic bottles as it is not redeemable. Both Praslin and La Digue could not weigh their waste as both islands do not have a scale at the moment.

Mr Mangroo said LWMA will be placing more emphasis on sorting wastes in the future to instill the discipline in the public.

He took the opportunity to appeal to the public to be more responsible, start sorting their waste as they will be moving in that direction in the near future.

He encouraged everyone to reduce their waste produced at the home.

The event will take place again in June and LWMA expects a better turnout.

The accompanying photos show some of the waste collected during the mini clean-up exercise on Mahé and Praslin. 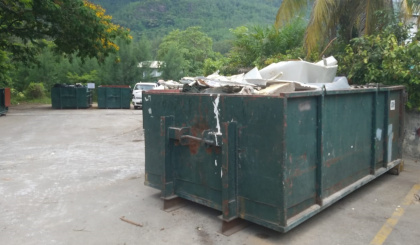