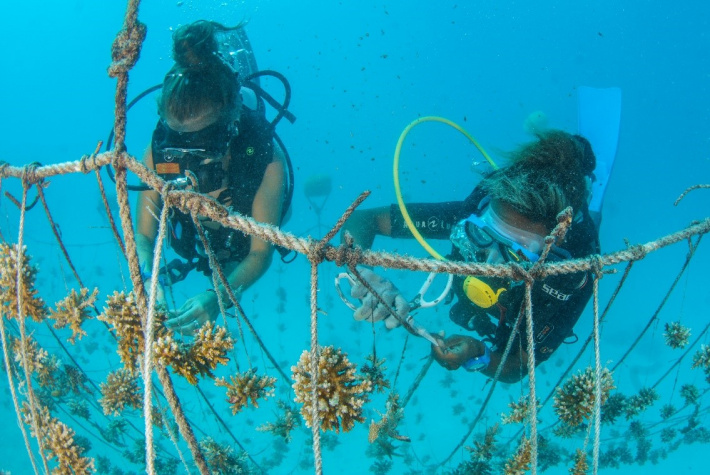 MCSS celebrates its contributions to marine conservation in Seychelles

With 2022 marking 25 years of the Marine Conservation Society Seychelles’ existence, this World Oceans Day seems an opportune moment to recount the organisation’s humble beginnings in light of where it is today. With very few environmental conservation organisations in existence at the time, and none dedicated to the marine environment, the Marine Conservation Society Seychelles (MCSS) was founded in 1997 by divers and conservationists in response to coral reef degradation from outbreaks of crown-of-thorns starfish and anchor damage.

In the years that followed, MCSS established a successful long-term whale shark monitoring programme and some years later, a long-term nesting sea turtle monitoring programme. While the well-known whale shark project stopped some years ago due to a decrease in the observations of these majestic marine creatures around Mahé, the organisation's logo, and the species’ protection under the Wild Animals and Birds Protection Act, remains a legacy of that era. In contrast, the long-term nesting sea turtle monitoring programme has culminated in the proposed nomination of the most important nesting beaches on Mahé as seasonally protected areas*. Additional to monitoring nesting behaviour, MCSS has also been involved in the satellite tagging of hawksbill turtles to track their movement; first from 2007 to 2010, which saw ‘Carol’ (so named by the Wildlife Clubs of Seychelles) travel from her nesting beach in south Mahé all the way to her foraging area in the north west of Madagascar, and most recently earlier this year, which saw the tagging of 5 hawksbills as part of the regional TImOI project led by CEDTM in Reunion. Both whale sharks and sea turtles are migratory species and as such embody the singularity of our planet's oceans and the importance of protecting habitats that are critical to their survival.

Another aspect of MCSS' conservation efforts that has become well established over the years is coral reef restoration. While the organisation's efforts began over two decades ago with passive restoration with the removal of crown-of-thorns starfish, which prey upon hard corals, they have evolved into active restoration with the coral gardening method. This technique involves propagating broken coral fragments in ocean- or land-based nurseries. MCSS implements coral gardening in a number of partnership projects with the private sector, as well as on a larger scale in the Ste Anne Marine National Park. Under this project, which is a regional project being implemented by a number of partners in both Seychelles and Mauritius, MCSS aims to rehabilitate half a hectare of reef**. Throughout all of MCSS’ projects and programmes, education and awareness has remained a key aspect of its conservation work, and the importance placed on this by various actors in the environment space over the years has certainly cultivated an environmentally-conscious and active youth.

With Seychelles' pioneering global marine protection targets and a youth more engaged than ever in ocean conservation, MCSS is pleased with its contribution to marine conservation in Seychelles and wishes all in this large ocean state a happy World Oceans Day.

Follow us to stay up to date on our activities! @marineconservationsocietysey / www.mcss.sc

* The nomination of the Sea Turtle Seasonal Protected Areas is funded under the GOS-GEF-UNDP A Ridge to Reef Approach for the Integrated Management of Marine, Coastal and Terrestrial Ecosystems in the Seychelles Project.

** The Coral Reef Restoration Project is funded by the Adaptation Fund and implemented by UNDP. 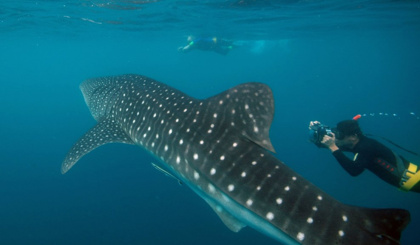 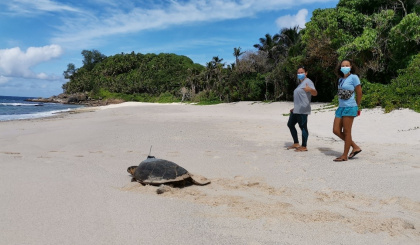 Hawksbill turtle returning to sea after having been satellite tagged