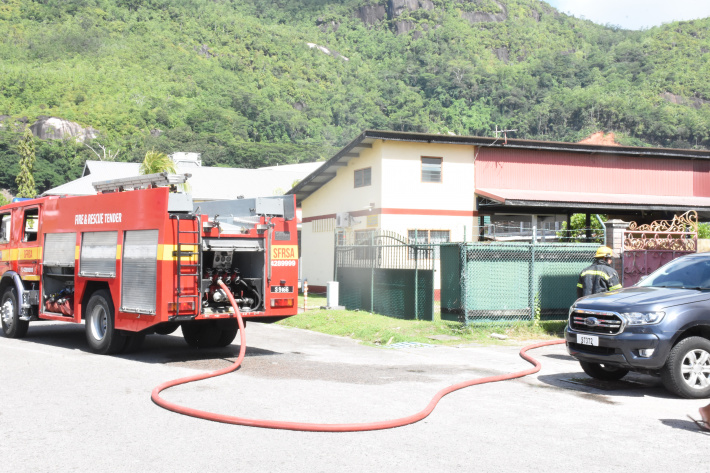 A fire truck at the site of the incident (Photo: Thomas Meriton)

A small fire broke out at Providence yesterday behind the building where Coastal Hardware and a few other businesses are located in the Neverland complex.

According to the spokesperson for the Seychelles Fire and Rescue Services Agency (SFRSA), Jones Madeleine, preliminary reports indicate that the fire may have started due to an exposed or faulty wire igniting with the trash and debris behind the building.

This can only be confirmed by the Public Utilities Corporation (PUC).

The SFRSA deployed three fire trucks with eleven officers on scene. However when they reached the site, the fire had already been extinguished by Cliff Suzanne, the general manager at Coastal Hardware.

The emergency call was received around 10:41 in the morning.

However a few minutes later they came back and told the tenant that it was getting out of control so he rushed out back to see and the fire had become quite large.

Mr Suzanne put out the fire by using a water hose nearby.

The other tenant noted that the proper fire hose wheel was not working which became a major concern for the tenants as they had to rush to the tenants on the other floor to get fire extinguisher which also needed servicing according to the law.

Mr Madeleine added that all the fire safety equipment should be working before any building is occupied.

He further added that they need to investigate why the fire hose reel was not working.

The general manager said he was in a meeting on Skype at the time and one of his employees informed him that there was a fire behind the building.

He stated that he stopped his meeting rushed out and used a water hose to control the fire with two of his staff tackling it on the other side.

He added that a few people assisted in controlling the fire, noting that if they did not put it out, the fire had the potential to get out of control.

From information gathered the fire seemed to have been from a wire which burst a water pipe and charred a metal sheet shed. Against the metal sheet there is a type of security door that was also slightly burnt and some planks of wood underneath that was burnt to bits.

The SFRSA ensured the fire was out thoroughly after checking the area.

No one was hurt in the process and the property was also not damaged.

Mr Madeleine advised the general manager, who had inhaled a substantial amount of smoke to have a check-up as he was having a slight respiratory problem.