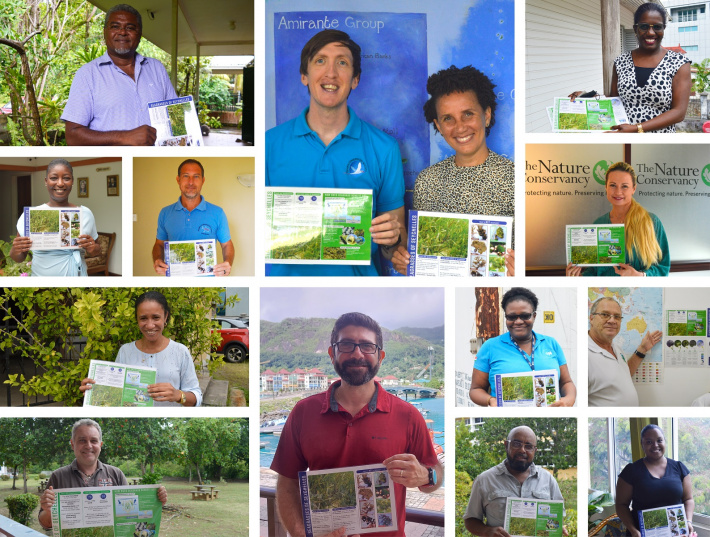 Citizen scientists, snorkellers and divers, marine researchers now have a new source of data to identify seagrass in their natural habitats and to investigate, if they so wish, seagrass diversity.

The general public and the scientific community are the two target groups which were identified by SeyCCAT’s Coastal Wetlands & Climate Change project to receive newly developed seagrass and seaweed identification cards.

The two ID cards were developed towards the end of the first phase of the project which had seen milestone developments in seagrass in both its scientific and community outreach elements.

Last year, in its 2021 Nationally Determined Contributions, the Seychelles government committed to an ambitious ten-year plan to protect its entire seagrass coverage in its EEZ. A mapping exercise began in the last quarter of the year to map out the country’s seagrass meadows and to gather information on the extent they sequester carbon from the atmosphere.

SeyCCAT is working with several partners, both local and international, to conduct this exercise.

Alongside the scientific efforts was the equally important community awareness raising on this vital coastal ecosystem and its numerous benefits to not only marine life but also to our country’s economic growth.

The findings of these exercises have all contributed to the information included in the seagrass ID cards.

The ID card for the general public enables the identification of red, brown and green algae as well as the five families of seagrass. Basic information on the seagrass lifeforms which include their English and newly identified Creole names are also featured in the cards.

The ID card for the scientific community goes more in depth into the benefits derived from seagrass and more information about the different seagrass lifeforms.

Team members from the project went round to various stakeholders in the conservation, education and tourism sectors last week to present an initial batch of the two seagrass cards.

Annike Faure, the project manager, says, “these cards reflect where we are at the moment in our understanding of seagrass in Seychelles. They round off the first phase of the project quite nicely where we have accomplished impactful developments in elevating the status of seagrass. We are excited to share these with seagrass friends and enthusiasts in the country. The feedback we have had so far indicate that these cards will be extremely valuable in further conservation work”.

SeyCCAT, through the Coastal Wetlands & Climate Change project, has been supporting the government of Seychelles in its endeavour to bring seagrass meadows on the forefront of the country’s climate change adaptation actions. The project which also highlights the importance of seagrass in reducing levels of greenhouse gases (especially carbon dioxide) in the atmosphere, also has international impact in that Seychelles can demonstrate to the world just how important our seagrass ecosystems are in reducing global climate change.

Managing the ocean in a sustainable manner is a critical commitment if Seychelles is to leave a conservation legacy for the next generation. 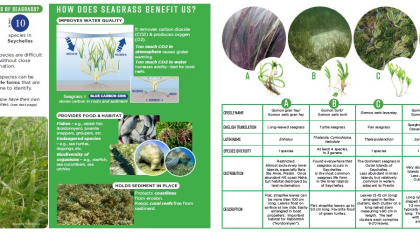 A close up view of the card