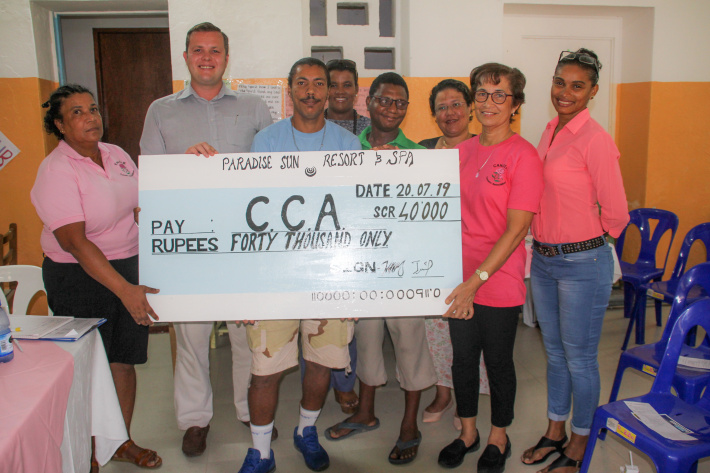 Paradise Sun Hotel has made a R40,000 contribution to the Praslin branch of the Cancer Concern Association

A sum of R45,000 was handed over to the Praslin branch of the Cancer Concern Association during its annual general meeting held at the St Matthew’s Hall at Grand Anse, recently.

Out of the sum, R40,000, has been contributed by Paradise Sun Hotel and it was money which the staff raised during a sponsored fun run/walk while the remaining R5,000 was donated by cancer survivor Romano Laurence and his partner Nadia Bedier.

Mr Laurence shared his testimony on how cancer changed his life at the tender age of 19. He particularly expressed his heartfelt gratitude to the staff of the oncology unit of the Seychelles Hospital for their care as well as other people who supported him and his family during that difficult time several years ago. He vowed his continued support in helping others suffering from the same fate as he strongly believes that a good support system is very useful in one’s fight against cancer.

The Praslin meeting saw the involvement of some 30 Cancer Concern Association (CCA) members including its Praslin executive committee and representatives from the Mahe branch.

During the meeting, a new executive committee to spearhead the CCA Praslin branch was elected and Tasianna Bossy was re-elected as the chairperson.

She thanked the past committee members for their support as well as welcomed the new committee and called on all members to join forces to together better support patients and their families.

Bishop French Chang Him, chairman of the CCA Mahe branch, challenged all members to win over at least one new member and strengthen the association.

“The more hands we have, the more we can do to ensure that cancer patients are never alone,” Bishop French shared.

The meeting also provided the opportunity for members most of whom are patients and survivors, to learn more about activities which had been held on both Praslin and Mahe during the past year.

Bishop French shared their achievements and various partnerships with the Ministry of Health in line with the association’s mission of supporting cancer patients. This is especially increasing the comfort of cancer patients while they undergo chemotherapy treatment. This year the CCA is marking the 20th anniversary of its existence.

Members also shared their experiences and ideas on how to improve the wellbeing of patients as well as give advice to others present. Surely, sharing each other’s experiences gives patients greater strength and determination to fight the pain of cancer treatment.

Gina Laporte, the inner island liaison person from the Mahe branch, introduced the ‘Hope for Kids’ and ‘Hope for Parents’ programmes which the CCA hopes to start on Praslin soon. The programmes aim to join kids who have lost a parent to cancer and parents who have lost a child for support and fellowship, counseling and mentoring. Both programmes are already showing positive results on Mahe and the CCA remains hopeful that the same can happen on Praslin.

Among the different views and ideas that members also shared and discussed during the meeting included the need for Praslin to also have a specialised, quiet place where patients could peacefully spend their last days and receive palliative care. The place could also be useful to other terminally ill patients as well.

Miss Laporte reassured members that their suggestions would be taken into consideration and acted upon.

Welcoming all the suggestions and views, Miss Laporte encouraged all Praslinois not to be afraid to speak openly about cancer and to come forward and do their part in the fight against the disease. 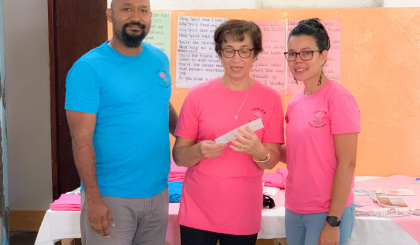 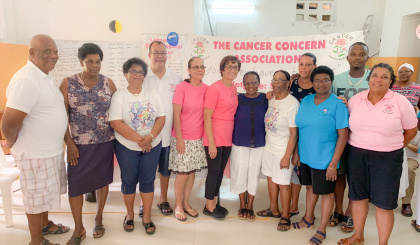 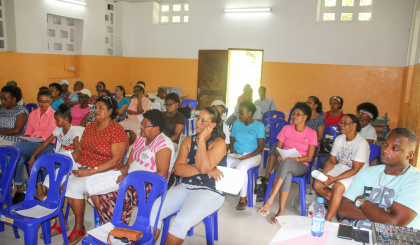