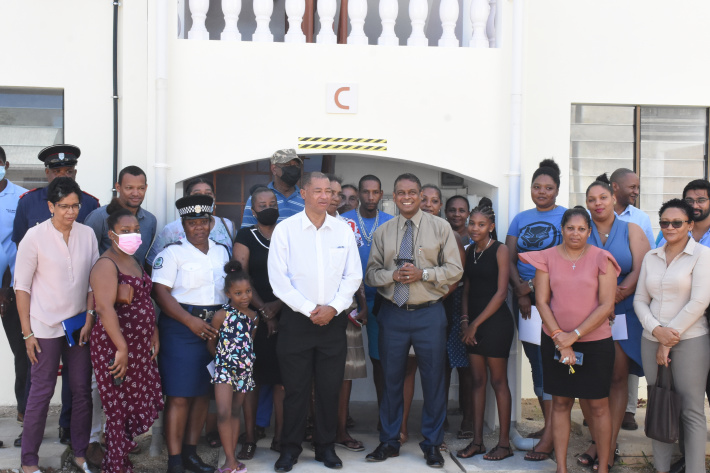 The new tenants in a souvenir photograph with Minister Rangasamy and other guests (Photo: Louis Toussaint)

The six families, who have been on the waiting list for a while, received their keys from the Minister for Land and Housing, Billy Rangasamy, and the National Assembly member for Anse Aux Pins Clifford Andre.

Minister Rangasamy noted that this is the last block in this phase.

“There were some complications to start the project because the area already had a sitting tenant and we had to find another alternative,” he said.

Once the issue was resolved, the ministry reengaged with the contractors to complete this last block, the minister said.

“There are other phases that we are still analysing but it will all be according to the terrain that we have but this hopefully may start next year,” Minister Rangasamy added.

The construction cost of the apartment block amounted to R5.5 million. Construction started in October last year and was completed just recently.

Unlike the other units in the series, this new apartment block has a gate with a pass code thus enhancing the level of security.

Minister Rangasamy noted that his ministry took into consideration security of the community and highlighted that this will help in deterring anti social behaviour, something he puts much emphasis on.

He further added that this of course raised the cost of construction but it gives an element of security to the tenants.

Minister Rangasamy further added that as much as possible and depending on availability of funds, this security feature will be included in all new apartment blocks in the future.

MNA Andre for his part stressed on the importance to maintain good relationships between the tenants to ensure peace, tranquility and good neighbourliness between them and that they should discourage all forms of anti social  behaviour in their community.

Mr Andre further added that it is important to live harmoniously together and give examples to others.

The new tenants also had a briefing on safety around the compound, measures they can take in any eventualities before leading Minister Rangasamy, MNA Andre and other guests on a tour of their apartments. 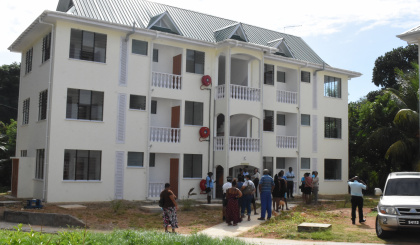