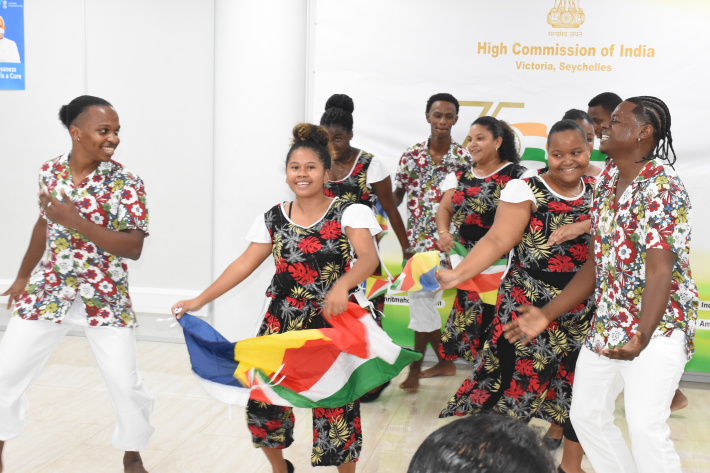 The youths performing part of a cultural show they will be presenting during their trip (Photo: Louis Toussaint)

Ten young Seychellois leave the country on Monday bound for India where they will take part in a 10-day youth exchange programme with other youths from twenty-four countries.

The delegation, led by Theresia Julie and Ronny Marengo, is travelling to India at the invitation of the Indian government as part of activities to celebrate the country’s 75th Independence anniversary on August 15.

The trip had initially been scheduled for January 26, 2022 but had to be postponed on account of the ongoing Covid-19 pandemic.

Yesterday afternoon, after a seven-month wait, they received their plane tickets from the Indian high commission in a short sending off ceremony at the commission’s headquarters in Victoria. The entire trip is sponsored by the Indian government.

When addressing the young ambassadors and their parents, second secretary, Gautam Kumar Biswas, thanked Seychelles’ Ministry of Foreign Affairs for supporting India’s proposal for a youth exchange programme and said India was happy to have “an energetic and bright group of people from Seychelles who will be making that trip”.

During their stay, they will be visiting various places of historical and cultural importance including the Taj Mahal. They will also be interacting with dignitaries and other young people from around the world.

“Through this trip they will get a better understanding of the people and culture, so I want to wish them a fruitful trip and a happy stay in India,” added Mr Biswas.

The 10 young Seychellois aged between 18 and 35 were chosen from a group of 40 who had come forward to take part in a quiz competition, which tested their general knowledge about India.

The Citizens Engagement Platform Seychelles (Ceps) was mandated to prepare them for the trip including teaching them traditional dance which they will be performing while in India.

Speaking at the ceremony, the chief executive of Ceps, Alvin Laurence, thanked the young ambassadors for being patient and to remain hopeful despite the setbacks which saw the trip postponed, one week before the initial departure.

He thanked all the government ministries and departments, namely foreign affairs, youth and sports, the Seychelles National Youth Council, which partnered with Ceps, and the Indian high commission to ensure the trip got underway.

“The delegates are now fully equipped to be youth ambassadors for the country and I know they will represent us proudly,” Mr Laurence said.

During yesterday’s ceremony two members of the delegation displayed the official attire they will be wearing while in India, the traditional dance for the performance, as well as their bag with basic personal items sponsored by the Seychelles National Youth Council.

They also performed part of a cultural show they will be presenting during their trip.

The delegation also accepted a coco-de-mer and Seychelles flags, which will be presented to the highest offices in India.

Darius Petrousse and Pamela Mathurin thanked the Indian government on behalf of the Seychellois delegation.

The delegation is expected back in the country on Friday August 19, 2022. 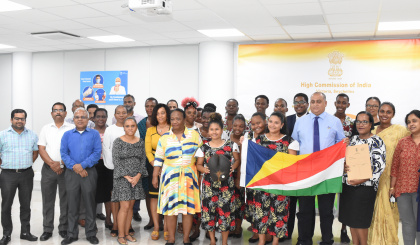