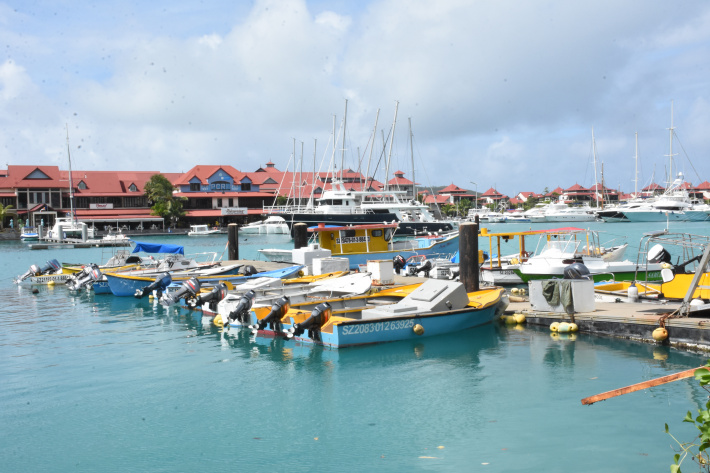 The fishers’ boats moored alongside a pontoon at Eden Island

The Roche Caiman Fishermen Association has said it opts to remain in its current location at the entrance of Eden Island for now, and wants to co-exist with the luxurious residential marina, built on reclaimed land.

The association, which regroups around twenty fishermen from Roche Caiman, Plaisance and Les Mamelles, made its position clear at a public meeting on Saturday afternoon at the Backstage Seychelles – Sports Bar, Restaurant & Lounge.

The meeting, at the invitation of the Ministry of Fisheries and the Blue Economy, and the Seychelles Fishing Authority (SFA), was to discuss the development of fishing facilities in the area.

It followed reports last month that the fishermen will have to move from their current site at Eden Island and be relocated on the other side of the road, near the Roche Caiman bridge. Since 2014, Eden Island has a non-legal agreement with the Roche Caiman Fishermen Association, to provide fisheries facilities for its members, in the existing location, which include pontoon, store, and ice plant.

Saturday’s meeting was chaired by Designated Minister Jean-François Ferrari in his capacity as minister responsible for fisheries, in the company of SFA’s chief executive Nichol Elizabeth and other top officials, as well as Eden Island’s legal representative, Bernard Georges.

When addressing the audience, Minister Ferrari pointed out that the main purpose of the consultation was to find out what the fishermen wanted, and to try and find a solution to the ongoing stalemate.

Last month, the association told Seychelles NATION, its members was not in favour of moving.

“I want to hear what you as fishermen want. Firstly, do you want to remain where you are and secondly if you accept Eden Island’s proposal to move, are you in favour of the location being proposed, near the Roche Caiman bridge. Thirdly, if you are not in favour of the two options, do you have a new proposal for a location?”, queried Mr Ferrari.

He also advised the fishermen to consider the plan for a new fishing facility with a pontoon, market,store, and new ice plant, being proposed by Eden Island’s manager, Craig Heeger, who was not present at the meeting for personal reasons.

However, Minister Ferrari also confirmed that moving to Roche Caiman bridge area had its shares of setbacks, as initially stipulated by the fishermen. They had previously told Seychelles NATION that their boats will be unable to navigate during both high and low tide as the bridge is too low.

“I have had two experts look at the bridge and they have confirmed what you fishermen have said. The problem can be resolved but with a lot of difficulties. It is fine for small fibre glass boats but not those bigger ones with cabins,” explained Mr Ferrari.

For his part, lawyer Bernard Georges, speaking on behalf of Eden Island, told the fishermen that it was pointless to dwell on the past and advised them to find a long-term solution for all parties and where everyone wins.

“There is a conflict, right or wrong, we need to find a solution for all parties. Keep an open mind. Is there a possibility for you to grow and expand where you are based at present, or should you move to a bigger and more spacious area? If so where is that area, let us identify it. And let us ensure we find a place that is safe, that is government-owned where you will not be asked to leave later on,” said Mr Georges.

The fishermen who intervened at the meeting raised several issues including the initial agreement with Eden Island back in 2014, to have ‘la jouissance’ of the current location. They also wanted to know what had happened to the proposed plan to turn the nearby area into a fishing village for Roche Caiman, with restaurants and shops.

The first speaker was the chairperson of the Roche Caiman Fishermen Association, Neddy Labrosse, who said moving was not an option.

“We know the place belongs to Eden Island and we refuse to move because we fought so hard to get this spot. They forced us to move here. I am calling on Eden Island to rebuild our facilities such as our pontoon, and we can take care of the place. We can co-exist,” said Mr Labrosse.

This was echoed by his father, Terence Labrosse.

“They can build a wall to separate us from their luxurious apartments if we are an eyesore for the residents. But we are not going to leave the sea and move further inland, because the Roche Caiman bridge is a major problem for us. We can maintain their place, ensure cleanliness just as they want, but we will not move,” said Terence.

Present at Saturday’s meeting was also the chairperson of the Seychelles Fishermen and Boat Owners Association (SFBOA), Keith Andre, who pledged his association’s support for the Roche Caiman Fishermen Association.

Speaking to Seychelles NATION, Mr Andre called on government to stand by the fishermen and to fight for them.

“I would like the minister and the SFA to defend the Roche Caiman Fishermen in their home with the same vigour and determination that they defend the Spanish industrial fishermen fishing in our waters,” said Mr Andre.

The two-hour meeting ended with several proposals, which will also be put to Eden Island. These included, reviewing the present lease agreement to transfer the plot of land to the Seychelles Fishing Authority, which will run and manage the place for the fishermen. It was also proposed that the fishermen should identify new locations for the construction of their facilities, of which the costs will be borne by Eden Island.

“The meeting went well but we are still in doubt. I would say we are 50-50, we do not know whether to leave or stay or if we will be taken out by force,” said the association’s chairperson, Neddy Labrosse.

For his part, Minister Ferrari said he was satisfied with the way the discussion went and his ministry will explore all the options, namely remain in the present location, and renovate the facilities or to identify new locations.

“We want a permanent solution. I am embarrassed as the minister for fisheries that this is happening and that the fishermen are asked to move every few years. It is not good for the community, nor the developers, so let us find a permanent solution,” concluded Minister Ferrari.

All parties have agreed to meet in six weeks’ time for further consultation. 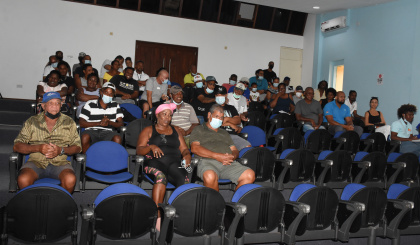 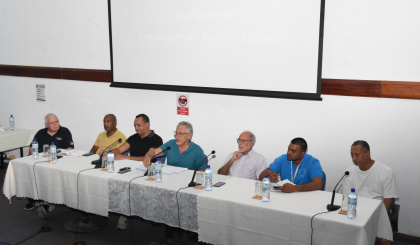