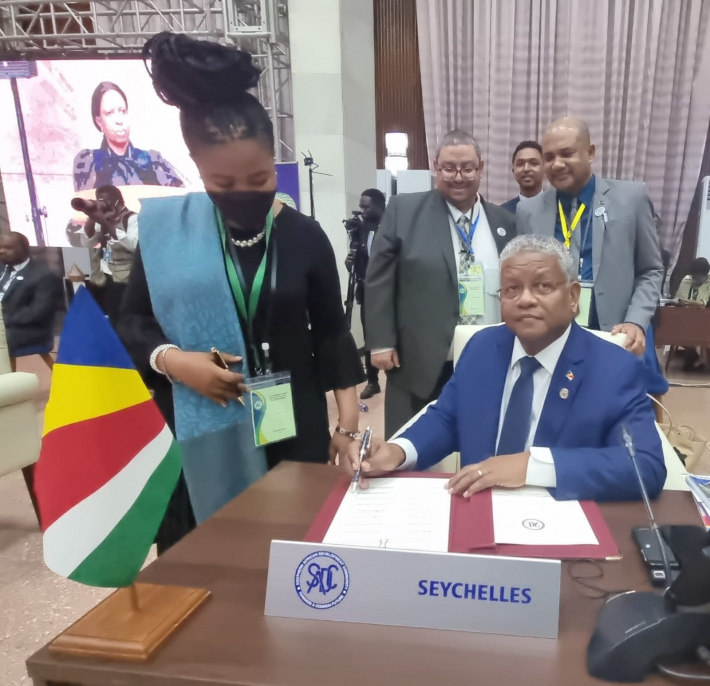 During the 42nd Ordinary Summit of SADC Heads of State and Government which adjourned late Wednesday evening, President Wavel Ramkalawan delivered two main interventions on key decisions aligned with the Seychelles agenda as an African small island developing state. The two decisions highlighted by the Head of State was first the urgency for maritime security needs to be addressed in the SADC region and the amendment of the SADC Treaty on the transformation of the SADC Parliamentary Forum (SADC-PF) into a SADC Parliament.

Commenting on Decision 2, Political and Security in the Region, President Ramkalawan stressed on Seychelles' impending concern that maritime security continues to be a threat to its safety, but becoming one of the most significant issues for the whole African continent.
“While the threat of piracy off the coast of Somalia has abated, we are seriously concerned by the emerging maritime threats in our region. The western part of the Indian Ocean is a highway for the transshipment of illegal narcotics, human and weapons trafficking. Our maritime resources are being poached through illegal, unreported and unregulated fishing, and our oceans are being polluted by the illegal dumping, contributing to the acidification of our oceans and putting our livelihoods at grave risk. Let us also be reminded that all indications are that funding for the insurgency in our region is obtained from illegal and illicit activities, such as drug and weapons trafficking occurring on the high seas,” said President Ramkalawan.
Addressing the summit of Heads of State and Government, President Ramkalawan outlined a set of recommendations to the Summit which were later adopted as one of the key final decisions of this Summit in steering the course for the SADC Maritime Security Strategy.
In his second intervention on Decision 24 of the Agenda, President Ramkalawan congratulated the SADC Summit for the immense progress made on the transformation of the SADC-PF  into a SADC Parliament which has not only demonstrated the leadership of member states but that they truly believe in parliamentary democracy and supports the notion that inter-parliamentarism is a necessary building block to achieving the coveted integration of the SADC region.
“Transformation of the Forum to a SADC Parliament will undeniably bring us closer to the achievement of the SADC milestones and assist us in implementing the long-term social and economic policies under the Regional Indicative Strategic Development Plan. This step forward is in line with the developments which occurred with major and mature Regional Economic Communities around the world which are all buttressed by the work of their respective Regional Parliaments. From this perspective, the SADC region too is to grow and evolve by enhanced cooperation at parliamentary level.
“It is thus a matter of sheer satisfaction that the Summit has reached this far with this demonstrated efficiency spearheaded by both the SADC Secretariat and the SADC-PF Secretariat in coordinating for the SADC Parliament to take life,” said President Ramkalawan.
Following all the Summit deliberations, the Heads of State adopted the annotated agenda and final communique for the 42nd SADC Ordinary Heads of State Summit as well as signed the various new legal resolutions and amendments to the SADC treaty.

President Ramkalawan, on behalf of the Republic of Seychelles, signed in favour of amending the treaty permitting the transformation of the SADC Parliamentary Forum into a SADC Parliament.
In concluding this year's SADC Heads of State and Government Summit it was approved for the 43rd SADC Summit to be held in Luanda, Angola in 2023.
President Ramkalawan’s presence at this year's summit also provided the opportunity to network and interact with his SADC counterparts as well as raise other matter of interest for Seychelles. 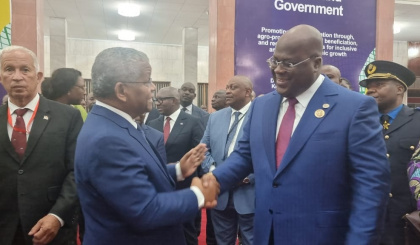 President Ramkalawan congratulating Félix Antoine Tshisekedi Tshilombo, the president of the Democratic Republic of the Congo, who was chosen as the chairman of SADC during its 42nd Ordinary Summit of Heads of State and Government 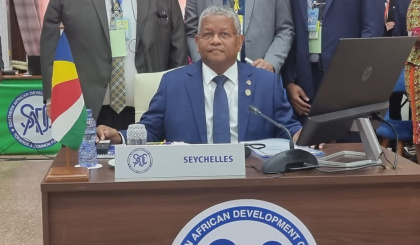 President Ramkalawan with the other members of the Seychelles delegation