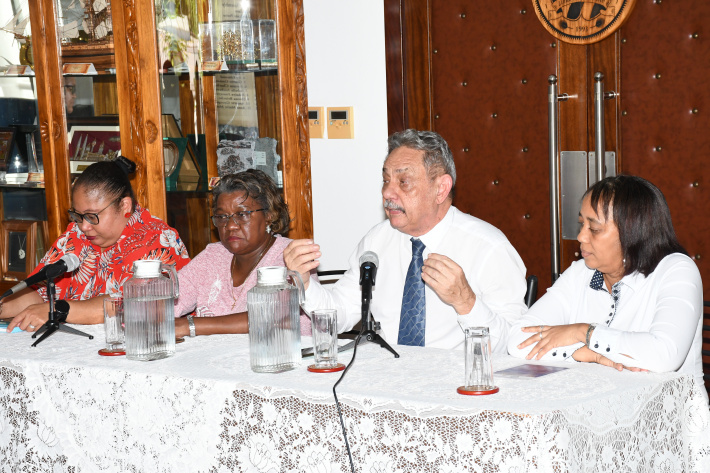 A group of young people, mostly girls, has been able to engage with the Women’s Parliamentary Caucus in an interactive session that took place yesterday afternoon at the National Assembly’s headquarters at Ile Du Port.

The two-hour session, organised in collaboration with the Seychelles National Youth Council (SNYC), was to educate the young people on the role of parliamentarians, encourage them to take a career in politics and become future leaders.

It was being held under the theme of the ‘Empowering the Youth’ and it coincided with International Day of Democracy on September 15.

When addressing the group, the chairperson of the Women Parliamentary Caucus, Regina Esparon, highlighted the role of the committee to promote women’s interest and integrity in parliament as well as the society as a whole.

Mrs Esparon pointed out that women are underrepresented in politics compared to men. She gave the example of Rwanda where politics is dominated by women with 61.3 percent in their assembly and 36 percent in their senate compared to Seychelles where there is only 22.86 percent of women in parliament. She added that their speaker and deputy speaker are also women.

It should be noted that the highest number of women parliamentarians were in the 2011 National Assembly where there were 16. It had varied between seven and ten since 1993 and for the present seventh National Assembly, out of the 33 members, seven are women.

“That is why one of our objectives is to increase the number of women elected in parliament by generating more interest for them to participate in the country’s politics, despite the challenges and barriers that prevent women from going into politics,” said MNA Esparon.

She urged the young girls to take up a career in politics and to become future parliamentarians. “As women parliamentarians we can push for your voices to be heard and promote equality and respect for human rights,” added Mrs Esparon.

Yesterday’s event comprised two presentations, firstly by the Speaker of the National Assembly, Roger Mancienne, who focused on leadership, what it meant to be a leader, and qualities required to be a good leader.

For her part, the chairperson of the Women Parliamentary Caucus, who is also the elected member for Roche Caiman, Honourable Audrey Vidot, talked about community engagement and how the young girls could make a difference in their schools and districts.

The presentations were followed by questions from those present, who included students from secondary schools in the vicinity of Victoria. The schools represented were Perseverance, English River, Belonie, Mont Fleuri, Plaisance, Independent, International School, as well as former members of the Seychelles National Youth Assembly.

Questions raised focused on elections, procedures to become a member of the National Assembly, the role of various committees and challenges faced by women parliamentarians at district level and in parliament.

They also wanted to know what the MNAs, especially the women, were doing to encourage young girls to come forward and take up leadership positions, the relationship between members of the opposing parties, and whether they were being good role models for girls who aspire to become politicians.

The young girls who spoke to the media after the interactive session welcomed it and described it as very interesting and called for more such events for young people. Lara Seraphine, from English River secondary, said she was happy they have been able to ask pertinent questions related to women in politics and other topical issues.

“I am glad that they have been able to answer our questions about issues that are not necessarily talked about much and they have given their commitment to address these questions in the National Assembly. I do hope they address more youth-related issues because the National Assembly do not talk much about young people compared to other issues like the economy or government work,” said Ms Seraphine.

For her part, Greasy Esparon from English River secondary school, said the session was too short and such interesting topics should be done regularly.

“We have plenty of questions that were not asked due to time constraint and I know that more young girls would want to hear what was discussed today so, increase the frequency to allow more young people to hear these interesting topics. Let us do it on a monthly basis,” said Ms Esparon.

Greasy, who aspires to become a politician, will be standing in the upcoming national election for the Seychelles National Youth Assembly. She follows the National Assembly closely and said yesterday’s discussion was an eye-opener.

“I am interested in politics because I see there is a need to have more young women bring forth topics related to us. This is not happening as much right now and so our voices are not heard and we lack support. I hope I am elected so that I can represent young people and help my school and district move further up,” she said.

Mariella Barreau from Plaisance secondary school who also aspires to be a member of parliament, said she was inspired by the encouraging words from the chairperson and the vice- chairperson of the Women Parliamentary Caucus.

“I am glad they shared their political journey and encouraged us to follow our dreams and not to listen to words of discouragement. I wished the session was longer because I had so many questions I wanted to ask them,” she concluded.

Honourable Esparon and Vidot who were the main speakers representing their committee, answered the questions with the help of two other panellists, Speaker Mancienne and deputy chief executive of the SNYC, Ghislaine Belmont.

They were assisted by other members of parliament present, namely the leader of government business, Bernard Georges; the leader of the opposition, Sebastien Pillay; and deputy Speaker, Gervais Henrie. 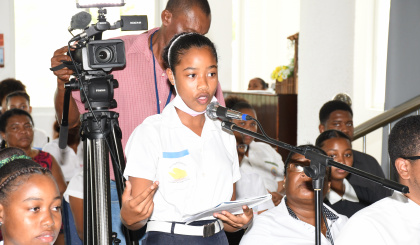 A student addressing her question to the panelists 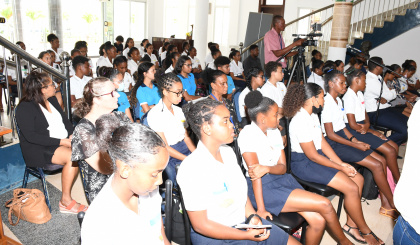 A partial view of the young aspiring politicians attending the session

Assembly approves budgets for another ministry, its entities and for the Judiciary |24.11.2022