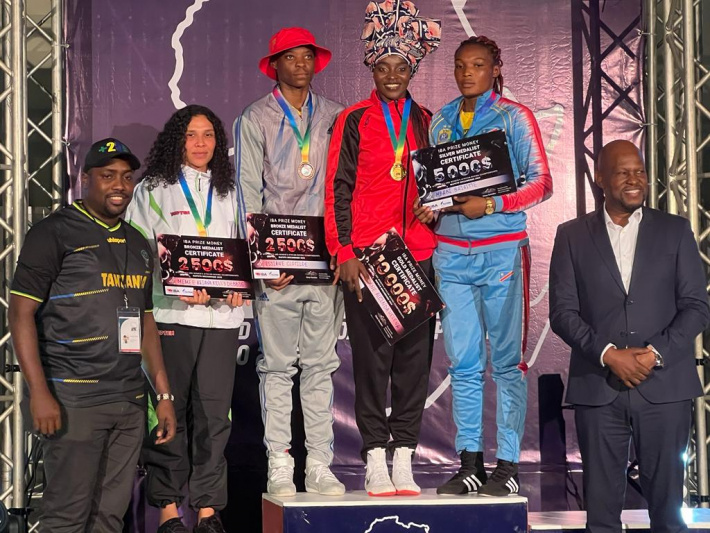 With bumper rewards up for grabs at the first AFBC African Men’s & Women’s Elite Boxing Championships which took place in Mozambique capital city in Maputo, only one Seychellois ‒ Arianna Memee ‒ managed to clinch a medal ‒ a bronze ‒ and a cash prize of US $2,500.

Memee’s exploit helped Seychelles to be one of the 18 out of 24 participating nations to claim at least one medal in Mozambique’s capital city. A record number of 11 countries earned gold medals.

On her international debut, Arianna Memee fought her way to winning a bronze medal in the women’s light middleweight (70kg) category. After winning her quarterfinal fight on points against Temnotfo Dlamini of Eswatini, Memee had the bronze medal and US $2,500 in her luggage, but she had the opportunity to go after some more cash when she met Brigitte Mbabi from DR Congo in the semifinal. Unfortunately, she lost the semifinal fight by RSC (referee stopped contest) to Brigitte Mbabi of Congo who then met Alcinda Panguana of host country in the final and lost.

Speaking to the media prior to the organisation of the competition, Africa Boxing Confederation (AFBC) president Bertrand Mendouga of Cameroon said the international federation is committed to uplifting boxing standards in Africa.

“IBA (International Boxing Association) president Umar Kremlev has assured us of his full backing including prize money at our championships in Maputo.

“This is the beginning of a new era in Africa boxing, we’re planning to bring on board mega sponsors to ensure we improve our standards through more tournaments and incentives for our boxers starting with our premier event in Maputo,” said Mr Mendouga.

Only boxers born between 1982 and 2003 were eligible to take part in the AFBC African Elite Boxing Championships. Altogether 155 exciting bouts were held in the five-day long continent championships, with 58 women and 121 men vying for medals worthy of good prize money.

In total, 24 champions ‒ 11 women and 13 men ‒ have been crowned in the competition.

Seychelles was also being represented at the competition by Shain Boniface who lost in the 67kg category on points again Shaft Mwandwe of Zambia, Romano Moustache who lost in the 54kg by RSC in the first round against George Molwantwa George of Botswana, Dasheil Fanchette who won on points in the 80kg against Alton Gabuza of South Africa before losing by RSC in the quarterfinal against Tarek Assaghir of Mauritius, and Joshua Cousin who lost by RSC in the first round against Yousufu Nkobeza of Uganda.

The African Boxing Championships are back on the AFBC calendar after a five-year hiatus.

Kitson Julie is Seychelles’ only gold medallist at the championships, achieving the feat in the light welterweight (64-kg) category in 2004 in Gaborone, Botswana.

Julie paved his way to the highest step of the medals podium in the light welterweight division with killer punches. The win earned him automatic qualification for the Olympic Games in Athens, Greece, but he lost 22-51 to Iranian-born Australian Anoushirvan Nourian in his first round fight.

Speaking to Sports NATION yesterday, Seychelles Boxing Federation’s secretary general Edmond Folette said “we gambled on sending this team to Maputo and we are quite happy with the results.”

“I am happy that these young boxers have shown the determination to fight in such a high level competition. We have an ambitious plan which we want to share with the authorities, but until today we have not had the opportunity to do so. On our own, we cannot revive boxing in Seychelles. Remember, we’ve known success in the past and behind all these success there were foreign technicians. We need their help for at least six months each year as boxing is very technical. We need help. We need people who can fast track our request for equipment, training opportunities and so on,” added Mr Folette.

He noted that “Seychelles can achieve great things in women’s boxing”, adding that “the bumper rewards will surely boost the boxers to do well.”

The list of winners at the AFBC African Elite Boxing Championships: