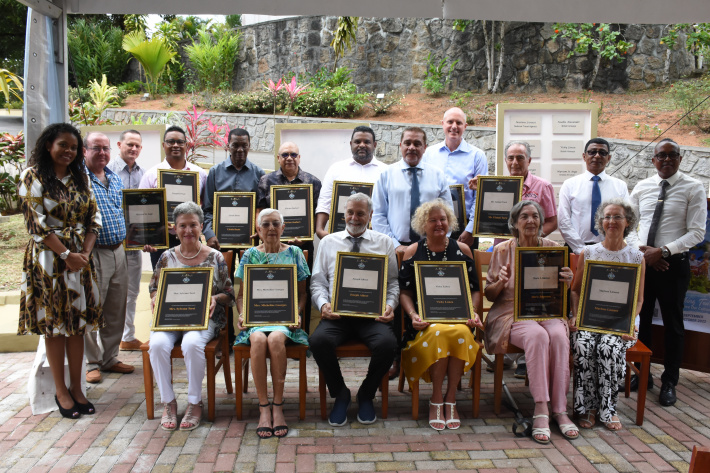 A seventh group of tourism pioneers have been recognised for their significant contributions to the development and progress of tourism in the country.

As testimony of their dedication, effort and passion which have been instrumental for the growth of our tourism industry to become the pillar of our economy, their names engraved on ceramic tiles are being displayed among past tourism pioneers at the Pioneers Park at the Seychelles Tourism Academy (STA).

It was the Minister for Foreign Affairs and Tourism, Sylvestre Radegonde, the principal secretary for Tourism, Sherin Francis, and the director of the Seychelles Tourism Academy (STA) Terence Max, who unveiled the commemorative plaque in a short ceremony, held at the park yesterday morning.

The ceremony to honour the pioneers who have been passionate about the tourism industry coincided with World Tourism Day and was part of the activities to celebrate 50 years of tourism in the country.

Present were the former Minister for Tourism, Alain St Ange, representatives of the tourism department, STA governing board, learners and staff, family members of the tourism pioneers and other invited guests.

In his address to pay tribute to the past and present pioneers of our tourism industry, Minister Radegonde said that they have all played a prominent role in the evolution of that industry.

He added that their indomitable courage and determination have remained a source of inspiration for us all and that we have much to learn from their experience.

“That is why we should not hesitate to seek guidance and advice from them and we should always include them in our activities wherever possible,” said Minister Radegonde, who noted that some among the pioneers will be participating in STA’s new mentoring programme for tourism management graduate students.

Minister Radegonde remarked that as we celebrate more than 50 years since the launch of our tourism and hospitality industry, we should not be easily get caught up in our personal activities and lose sight of the tremendous contributions that the tourism pioneers have played in ensuring that the tourism industry, the main pillar of our economy, has taken root and continue to prosper.

He commended and thanked the tourism pioneers for leading our tourism industry to where it is today and where many young entrepreneurs are now following and building on.

Speaking to the press, Mr Albert from Creole Travel Services said he was happy that his efforts dedicated to the growth of the tourism industry of the country have been recognised.

He added that while we strive to keep out tourism industry to a high standard, he hoped that the younger generation gear up for the challenge of taking the industry to the next level amid strong competition from our neighbours.

Mrs Georges (86 years old) from Auberge Louis XVII and Jardin Du Roi said that although she was happy to have been recognised for her efforts to promote our tourism industry, she did not go into tourism for her to be recognised but because of a dream she had for it.

She added that tourism is a challenge and she joined the industry because she likes challenges and to overcome challenges.

Chef Ulrich Denis said that since he has given a lot to the industry, and is still doing so through his expertise, to be recognised for his effort is an honour for him.

He added that the younger generation should follow the examples set by the tourism pioneers through courage, determination, passion, intelligence, including punctuality, should they want to succeed in the tourism industry. 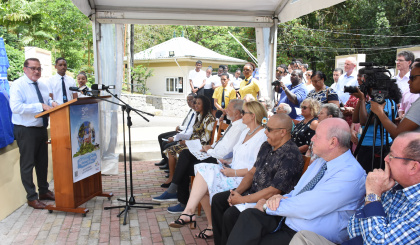 Minister Radegonde addressing the gathering at the event 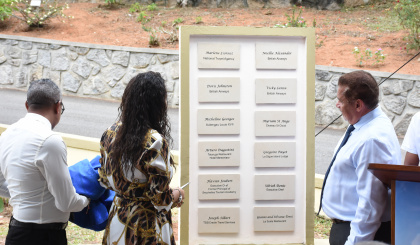 Mr Max, PS Francis and Minister Radegonde after unveiling the plaque on which the names of the thirteen pioneers have been inscribed

Tourism department and La Digue stakeholders discuss future of tourism on the island |21.11.2022